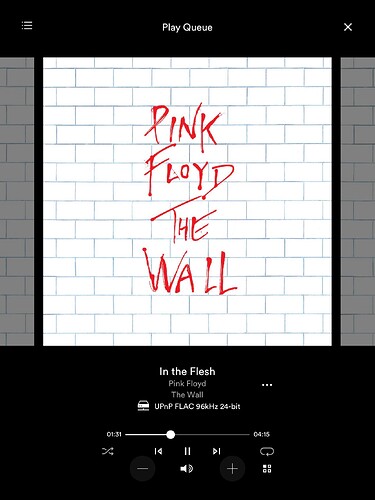 Lately all pink floyd exist on HD format but I don’t like the sound,rubbish, even cd I didn’t like much …as I Remember Pink Floyd sound was good on vinyl…
Very frustrated the way it sound now.

I agree. The hd hires stuff sounds wrong. Too extended and thin somehow.

Horrific spoiling of the best music written and played by the greatest band ever, that’s all!!

I received an email about these releases from HD Tracks the other day - haven’t had chance to listen to them yet, and was looking forward to giving them a try but sounds like I’m in for a disappointment (as many remasters often can be in my experience). I’ve generally found previous Pink Floyd remasters to be fairly decent - I thought the 2011 CD remasters were generally pretty good, and really liked the 2019 remix of A Momentary Lapse of Reason. The 2014 96/24 of The Division Bell didn’t seem to different to my original CD copy, although that’s not necessarily a bad thing.

There is another thread on here and many do seem to like them. I played meddle and was disappointed and then DarkSide and thought my original and ancient vinyl was way better.

None of these hi-res things are anything to do with the Floyd. Warners has reprocessed/upsampled them, presumably withut the band’s permission - like the “hi res”/MQA “masters” on Tidal.

These are the ONLY band-sanctioned hi-res versions of their catalogue:

There is, for example, NO hi-res version of The Wall (though Guthrie is working on it) anywhere.

Thanks Kev…….i did post on the PF HD thread that it did not sound right…….if no care was taken, then it is a take on. Considering the latest Beatles release, there should be huge interest in PF doing it right🙏

The trouble with the PF thing @Gazza is that Chuckles only wants hi-res versions done by Guthrie, Fat Dave wants them done by Andy Jackson. Thus, deadlock.

Post-Rog stuff only needs DG’s (and Nick’s) say-so, which is why it all exists in hi-res.

Pompeii is also in hi-res on The Early Years, but Jackson’s mix is terrible - painfully trebly.

It’s simple, just stick to vinyl and you will be happy

I’ve heard some great rock hi resolution releases (e.g. The Doobie Brothers), but also many awful ones (e.g. Travelling Wilburys). The problem IMO is too much compression/EQ applied during remastering.