I’m trying to work out your goal here? I expect it’s probably an attempt to make your kit sound “better”. I doubt very much it will make any difference and could in fact make things worse!

If you’re doing it to have a tinker about then fair enough but the main purpose of optical Ethernet vs electrical Ethernet is optics ability to support very long runs between equipment, as in, between buildings and potentially 1000’s of meters or even km’s. Using it over very short lengths of a few meters is unlikely to make any difference, it’s also a lot more fragile than a copper wire and not very good at going round tight corners.

It is the weekend though so what the heck.

presently I prefer using fiber from mac mini running linn kazoo server to the switch. and switch to streamer with plain ethernet.

I bought a geab/bag of ethernet isolators and filters to try out. preliminary most make it worse.

i’m going to do a proper tunedem during the coming weeks.

you write on a forum where cable dressing is accepted and normal behaviour is having the burndy and snaic touching each other exactly once.

streaming as a source needs help. something is missing.

The main issue you face when replacing copper cables with fibre is the fact you have to convert the signals back to voltages from wavelengths of light eventually regardless, as most (all in Naim’s case) audio equipment that is IP networked is usually connected over copper Ethernet, partly down to cost and also the fact that most homes don’t have fibre optics running through the ceilings and floors.
As you pass the data back and forth between pulses of light and voltages of electricity inevitably timing overheads are incured and you potentially add jitter as the clocking between devices is probably not going to be accurate enough to completely avoid timing penalties.
If you’re doing it to somehow remove noise from the network I wouldn’t bother personally unless you’re running 100’s of meters of cables around an enormous country estate. The amount of noise you can expect over a few meters of cable is next to nothing and as long as you use a decent spec cable like Cat6a (just your bulk standard type here, not the exotic audio flavours) the design of the cable itself manages for electrical noise and interference pretty well.
If however you’re just doing it out of curiosity and a desire to learn more about optics then fair enough.

I think the clue is in the thread title, playing implies the exploration of a curious mind.
I’m a telecoms engineer by day but a music fan by night, I limit my fiddling time to maximise my music time not to mention juggling duties as dad to two little ones!
I think also it’s nice to share personal experiences as well as enjoying experimenting, all part of the fun.
If you fiddle about and are happy with the results then kudos is due, mileage may vary!

Why? Why not. The Cisco has fibre ports so why not use them.
No goal, just playing. Who knows, it may all fall flat or it may not.
Theres no huge expense in involved, I can get everything I need for about 40 squid.
Aside from the Atom, everything connected to the switch, possibly the switch itself, which I only use for music, is all powered by a smps.
Maybe there’s noise from them getting in there somewhere, maybe the switch is good enough to filter it out, who knows. I don’t have access to the test eqpt these days.

You might consider getting a second switch and SFP rather than a cheap consumer grade media converter. To my mind this is a more versatile option, and avoids the use of a cheap wall wart for the FMC.

It’s certainly something to think about but at the moment it’s a bit OTT for my needs. I would certainly consider a LPSU for the TpLink though.

Remember that the alleged benefits of these Cisco switches is gained by connecting one to your streamer, and would, I suspect, be lost by putting an FMC between them.
Also, some of the TPLink FMCs that run GIgabit Ethernet can only work with other GB devices, so would not work with Naim streamers, which run 100MB Ethernet. Not sure if this still applies to current FMC models, but it has been an issue for some who have tried it.

Also, some of the TPLink FMCs that run GIgabit Ethernet can only work with other GB devices, so would not work with Naim streamers, which run 100MB Ethernet. Not sure if this still applies to current FMC models, but it has been an issue for some who have tried it.

Something I wasn’t aware of and to watch out for. 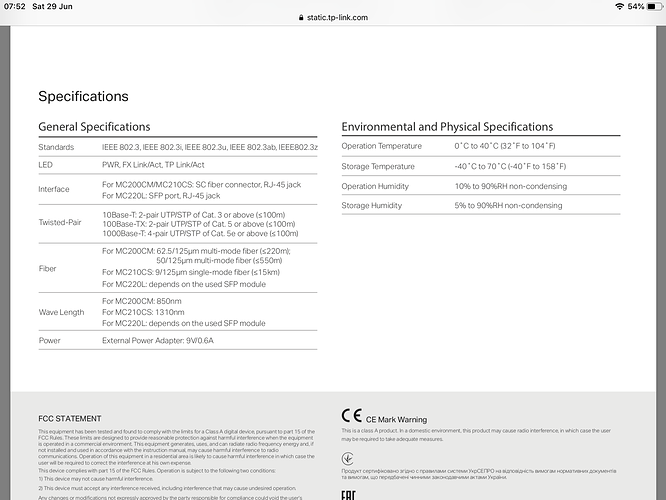 I advise caution… the clocks in the fibre converters may be of a poorer quality than in your switch, especially if a quality switch… so you may be adding more noisy side bands using fibre converters. Of course you may prefer the effect of adding digital noise with the fibre converters if this is the case. Digital noise is not necessarily unpleasant…
So yes the motivation really needs to be understood. If your streamer uses a fibre SFP (and Naim don’t currently) or you need an Ethernet segment longer than 100 metres and you don’t have the option of using fibre SFPs, then fibre converters can make sense… otherwise you are most likely adding more noise and uncertainty into the mix… you may get lucky, but there are probably other ways of achieving this noise shaping.
Also with fibre, and I only know this too well from my professional world, once in place and from time to time you need to check the link quality using a managed device. Bad fibre terminations can start to fail and the link quality worsens, but not necessarily outright fails.

But sure, if you are just playing with the technology and learning about it, then there is absolutely nothing wrong with that at all, and I would encourage it. I just wouldn’t rely on it for your quality audio systems until you are totally familiar with it and know what to check.

@Simon-in-Suffolk, you have indirectly, answered my original question.
If I connect fibre between switch and Atom then there’s the possible problem of noise/crap clocks etc that you mention, but, if I connect the fibre between the switch and router then I have isolated the rest of the network. The switch then can reclock and do whatever it does and send that direct to the Atom without the fibre possibly introducing nasties. Yes?
I’ll give it a go and see what happens.

But what are you trying to isolate?
A regular switch (or LAN switchport on a router) isolates other devices from each other unless the data is being broadcast or multicast.

To isolate broadcast traffic you typically need a seperate subnet using a router.

I’m not trying to do anything in particular other than to have a fiddle and wait for the bang!.

Data traffic, no, but the possibility of garbage from smps’s, possibly.
Until I plug it in, I won’t know.

Well only in extreme cases… and only really as common mode noise, and if it was that prevalent I suspect it would have questionable EMC compliance, not really an issue for a quality switch. And if the case a ferrite choke or two clamped around the Ethernet lead will help impede any common mode noise. (Common mode noise is the same type of noise that travels along mains wiring, interconnects etc… ie the noise is relative to external reference, rather than part of the signal itself)
BTW a fibre media converter can also create new common mode noise of its own…

In the days of me using a little Netgear switch, I found a ferrite choke made a marginal benefit on my old NDX. However with Catalyst devices I found no benefit in using the choke.