What is it with people and plurals? In recent posts I’ve seen merit’s and reply’s. Why do people add these apostrophes? Why do people write SBL’s and not SBLs? Why ATC’s? Why 606’s?

It’s perhaps linked to a widespread inability to understand the difference between its and it’s.

It’s doubtless a reflection on me being some sort of weird obsessive and people will say it doesn’t matter. But it’s not hard to get plurals right and it’s surprising that so many get it wrong. It’s like apostrophe diarrhoea.

No, you are not obsessive.

My command of grammar, syntax and spelling is far from perfect, but it frustrates me when folk seem to treat (probably) the most expressive written language on the planet with carelessness.

Perhaps the fault lies with “progressive” teaching of English in the 70s.

As an example Mrs B’s mother once remonstrated with her youngest brother’s English teacher about his very poor grammar and spelling.

She was informed that it was not policy to correct this because it stifled creativity.

As a consequence, despite gaining a degree in maths (albeit from UEA), he struggled to find a job and still has difficulty expressing himself in writing.

I hope I’ve got those damn commas in the right place.

Why do people write SBL’s and not SBLs? Why ATC’s?

As I remember, that is a valid usage, ‘s for the plural of an acronym was once the correct form, although it’s now pretty much only used in that way by pedants. (I’m schooling myself to avoid it.)

Oh poo. Knew I’d get something wrong. Must engage brain in future.

I find the number of typos/errors in my own posts quite annoying.

Often a case or rushing I think and not reading what you’ve typed before submitting a post, I generally edit the typos I’m aware of but sometimes wonder why bother.

Lotus’s factory made both my Lotus’.

On the internet I have become lazy though and forget or just don’t take the time to check grammar or even spelling sometimes. 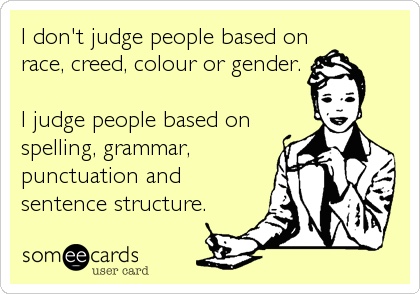 All that schooling by your wife still hasn’t prevented the error in your third paragraph! I agree about the dyslexia and second language, hence why it would be poor form to raise it in response to a specific post.

When I was in the RAF an unwritten, but essentially obligatory, requirement for promotion beyond Flight Lieutenant was the completion of the ‘Individual Self Study Course’, or ISSC. This was, effectively, a nightmarish correspondence course in grammar and general written skills (the military often employ very old-fashioned and structured written formats) which took around 18 months to complete. Although I passed, I rather lost interest after reaching the unimaginatively titled chapter ‘Abuse of the Colon’.

a degree in maths (albeit from UEA)

I agree with your general thrust though, even if you did muddle commas with apostrophes!

Richard Hoggart’s Uses of Literacy (which I’ve not read) possibly contains the seeds of the answer as to why English grammar and punctuation are so difficult. But I am aware that it, and mentions of the mass media, polarise people so I will leave it there.

Hmm… this topic doesn’t help my confidence as a non native English speaking foreigner. I really try to write English as good as I can but I’m sure I make a lot of mistakes.

That said, I also really enjoy the beautiful and subtle - or not so subtle - English in many posts here and I really learn from it!

Why do people write SBL’s and not SBLs? Why ATC’s?

As I remember, that is a valid usage, ‘s for the plural of an acronym was once the correct form, although it’s now pretty much only used in that way by pedants. (I’m schooling myself to avoid it.)

Interesting. I was thinking earlier that with acronyms for some reason it looks better visually to have an apostrophe there, correct usage or not.

What’s the current thought on apostrophes with surnames ending in ‘s’?

I was taught (I think) that it was for example, ‘The Jones’ house is for sale…’ or ‘The Evans’ dog is very noisy’.

I was too thick to attend grammar school, let alone university.

I had the fortune to land a decent job and spent 7 years as a correspondence clerk to a succession of Government ministers where I spent each day reviewing the written work of senior Civil Servants, most of whom had expensive educations. Some of that seeped in perhaps.

I was taught the same, and have noticed Evans’s and Jones’s too. It would be good to know which is more correct.

It is odd, isn’t it? Then there’s the inability to match plurals properly: There are a lot of examples of this.

That’s another interesting one. I wrote loads of reports for Councillors and one of the challenges was when we use capitals. I’d never use Civil Servants as you’ve done, as I was told it was irregular capitalisation as it refers to civil servants in general. So in that case it would be ‘the work of civil servants’, but if it was a specific person it would be the Head of Talking Bollocks. Or, as many on here seem to believe it should be, Bollock’s.