In my country it’s impossible to try power strips,the only one I can try is from my dealer soon will have, probably both chord M6 S6…. Fezz power strip price about 1490€ very expensive as Chord

I believe that is the more expensive variant. There are 2 different strips. Should you need 6 outlets of which 2 are dc-blocks then it’s the expensive one you should buy.

@sbilotta thats interesting. I was considering trying the M6 vs my G3 Peek but it will be a bit a pain in the arse to change over as the G3 is in between the 2 Fraims with almost no access as the stacks are pretty high. The G4 looks interesting and apparently they keep making minor updates to improve it. I don’t think I have heard anyone report on G4 vs G3. If I do change I want something to make the sound less edgy and more natural. I am finding the high frequencies a bit too clear at times!!

I believe that @Gazza made the change from G3 to G4. I’m sure he would be able to help you.

I had a G3 and it was a big improvement over a £100 strip set of sockets. Then came the sparkly bottom that Andy from Signals fitted while i watched. It just sounded so much better, all round. I was a bit surprised that Musicworks then used even more of this compound “peek” , but it works. Just sounds more musical……i got a good trade in-on my G3 sparkly bottom.

Worth a try on a return basis.

Yes, I too have my G3 in between two Fraims and indeed it was a right pain to change the strip and cables every time to compare .

If would be great if there is a photo showing the innards of the Chord PowerHaus. I am not sure why Chord doesn’t provide any images of the insides of the power strip, and there isn’t any available when I searched on the internet. There are images showing the innards of the Audiquest Niagara 1200, and it’s interesting to note that several tiny transformers are used in the construction of the units. 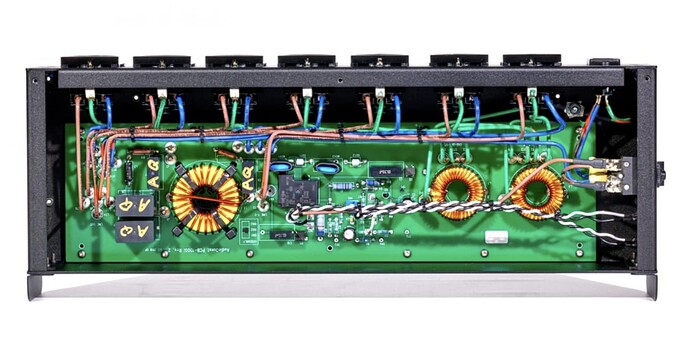 AQ Niagara is a power filter when Chord M6 and S6 are regular power strips with no filtering. It’d still be nice to find proper pictures of the innards though.

I read somewhere that Chord strips use some sort of rails instead of proper wiring or even star-wiring for the outlets. That sounds bad to me since metal rails is the basic configuration used by all the bulk power strips costing 5€ in the electronics store.

To my knowledge Naim does not recommend power strips with filtering

I’m not so sure one can generalise on such. There are bad and great filters. If the incoming AC is junk a filter is most likely to give you a great improvement.

My 1200 is a big uplift in sound. There’s no “conditioned” sound. The system sounds better with it in that with the wiremold I was using before. Great piece of gear.

I recently went from a G3 with peek base to a G4 and I found it a worthwhile upgrade it could be just what you are after. Try to borrow one and do a comparison in your own system and see what it does to your sound.

Then why not try them both, without risk, and see how they compare with your existing block?

That`s my plan, my dealer is little bit slow those days…so i stiil wait.

I have a different but related question. At the moment, I have a 6-way block and a Hydra, both from Grahams. I have 2 wall sockets and need to power 9 things, so I would really like a (say) 8-way or 10-way block out of 1 wall socket. I don’t want to spend a fortune (£500 ok, £5000 not ok) and would ideally get something flat enough that it will tuck under my rack (just over 8cm).

Any suggestions for a simple solution that betters the mess I have now?

The fuse is there to protect the cable only.

From Electrical Safety First.
The fuse in a plug is a safety device designed to protect the lead rather than the appliance. It is a deliberate weak link in a circuit which will ‘blow’ if an electrical appliance or extension lead draws too much current due to either an overload or a fault. The blown fuse cuts off the electricity to stop the lead and appliance from overheating and causing a fire.

In addition to DiggyGun’s reply & in answer to @opus … “I think the UK might be the only country in the world to do this. Seems like a hold over from old days.”

It was designed & embodied in the 1940’s to overcome the anticipated copper shortage & the massive demand for house, industrial & other infrastructure rebuilding after WW-II.
The saving in copper with a ring main system compared to a radial system in a typical domestic house is estimated at 25%, I suspect that might have changed over the years.

In addition to UK, the ring main system has also been adopted in Rep. Ireland, UAE. Hong Kong, Singapore and other British influenced countries including a few parts of China, Indonesia & Africa.

Olson make custom distribution boards, not sure about dimensions.

What seems to have worked best for me is a Grahams Hydra for the Naim stuff into a special wall socket which is rhodium plated. The other components (non Naim) are plugged in to a standard Amazon power strip with no surge protection which I opened up to make sure all the connections were sound.

Tried several alternatives such as Isol8 etc and also the Titan power strips, where I have my equipment sited it all gets a bit messy and cable dressing is a bit of a nightmare.