Currently I have 2x 555PS, 1x 500PS and 1x 552PS. They are all on Medium levels. I can add a standard level to bring the 2 fraim stacks level. I would prefer not to add another Medium level as the stack will be really high then.

Picture attached to show the current set up of PS’s (from bottom) 552,500,555D,555A. Any further thoughts on that layout would also be appreciated. @Darkebear you advised me initially which led to the extra space between PS’s and spare levels on the brain side. Thank you. It made a difference! Moving Power Supplies is a hard job which is why although trial and error may be best I like to get a starting point based on the vast wealth of knowledge here! 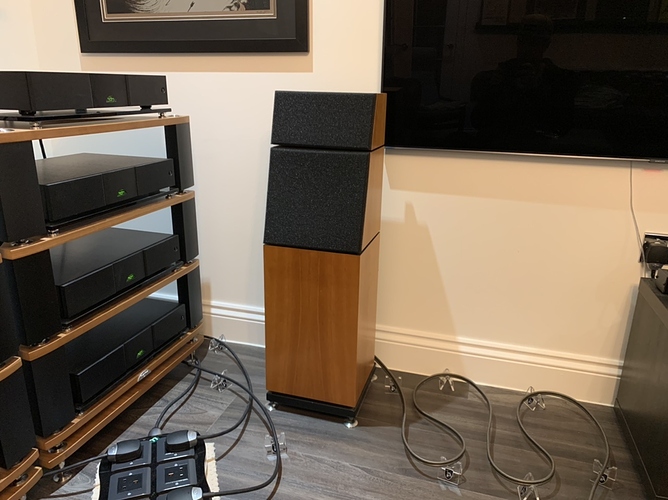 Generally I’ve found that the 500PS works well on the lowest shelf better than the other supplies - it may be it is so heavy in itself that it works better with the bottom shelf self-resonance.

I then found that when I tried my 552PS it was better on shelves above the lower shelf; the very lowest Fraim shelf is always unique as it has no raisers and works differently from all the others, which all in themselves have their own ‘sound’.

The 500PS works best alone with a gap from other supplies for its own and their benefit, so the lowest shelf means one ‘side’ of the PS is automatic free-space, so that helps.

Where (gap) here means the gap made by the Medium level above box it spans.

The top two swap the Burndies at the PS-end and listen and decide which sounds best in terms of you wanting to play music rather than anything that you obviously hear done better.

Thanks @Darkebear for the very useful information. I will indeed swap the Burndies over and see if engagement increases! I think I could get away with the 500 on the lower level (cable dressing wise) if I space the fraims apart a bit more. I suspect if anything moving the fraims apart will also help by separating the power supplies further from the head units. Would you think the 552 power supply would benefit from a medium level i.e. a gap between the XPS-T or do you think the difference here would be negligible? Thanks again for the useful help and swift response!

Would you think the 552 power supply would benefit from a medium level i.e. a gap between the XPS-T or do you think the difference here would be negligible?

It will benefit - I’ve found it seems to be a general goof upgrade to get a gap as made by either a Medium Fraim level - or an extra Standard empty shelf inserted makes a beneficial change. I tend to go for Medium shelves and that is cheaper than two Std levels and keeps the height down.

But it gets to a point where you decide - enough - when you are happy with how it is all performing…and running out of space or money!

The space gives a faster more open presentation and removes a lot of murky coloration from bass-end, so it will also depend on if you have large full-range speakers that show that up more. Once I heard the effect I kept borrowing Medium shelves to try from the Dealer and ended-up buying more as it was hard to go back when you hear what your system can do.

So the answer is ‘yes’, for the 552 it is reasonably sensitive and you should hear a worthwhile upgrade.