Is this the best hifi I have yet heard heard? I am thinking it is pretty close. After 35 years.

I’m on my third night listening to this.

Something other than Spotify as a medium may well make it sound better.

SQ is in the ear of the beholder

Great original album, and a fine remastered 2CD edition from 2007. I am assuming this is the disc you refer to.

Yes, it’s from the 2cd remaster. I don’t think the acoustic version is available on vinyl but to my ear I don’t think I’m missing much.

The acoustic version came out on vinyl for RSD in 2019.

Now selling for around £100 on Discogs.

Thanks for the heads up. Not for me at that price though.

I’m lucky enough to have a copy, but prefer the original to the acoustic version.

I agree but the acoustic is hard to beat for late night listening with a glass of wine.

I think it is an interesting adjunct to one of my favourite albums. Unlike many ‘acoustic versions’ some tracks definitely offer something new over the full version. ‘Desire As’ is fantastic

I think that’s why I’m enjoying it so much. It’s been many years since I listened to the same album every day. So much choice nowadays. I had a similar experience with Annie Lennox on MTV Unplugged with a version of Here comes the rain again some time ago.

It’s been many years since I listened to the same album every day.

Thanks for the heads up. Listening to both the acoustic album and the original on Qobuz.

Desire as is doing it for me

Are they acoustic versions, or demo versions? Must dig out my copy to check.

It’s an acoustic version originally released as a 2nd cd and subsequently on vinyl 2019 I think.

From Discogs: This album includes the full acoustic album that was recorded by Paddy McAloon in the summer of 2006 and released as part of the 2007 Legacy Double CD edition of ’ Steve McQueen’ .

Oddly, having not seen this thread/ I’ve been playing the non-acoustic version a fair bit in the last week or so. Nearly picked up a second vinyl copy in HMV the other day during a ‘flash sale’ but I already have the original vinyl which still sounds darned good.

The original had always been one of my go to lps when I can’t decide what to listen to. I discovered the acoustic version purely via Spotify last year on my second system. It sounded great then but it’s only in the last couple of weeks I’ve listened on my main system and been blown away.

Will give it a shot on Qobuz later! 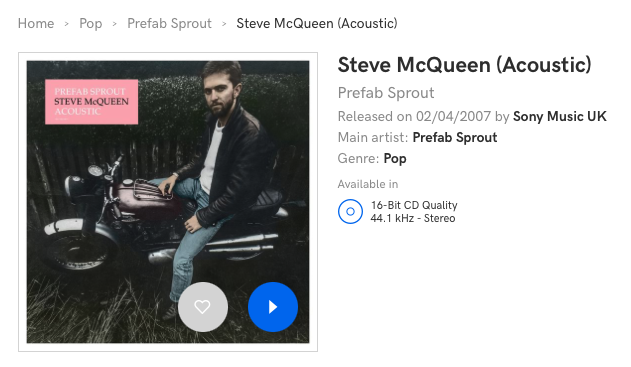