I thought I’d lean on the forum for some advice…

Looking for a pressure washer. Mainly for car use (snow lance) and light home use. Karcher seems to be the go to choice and the K2 looks ideal. Any recommendations / advice appreciated

Using a K4 for the last year to wash two cars with no issues.

Having said that, Karcher’s snow foam cannon isn’t especially good, and I bought a 3rd party one instead which gives a much better ‘quality’ of foam.

Not washing cars at the moment during lockdown due to conflicting media advice, and I don’t want to get any police warnings, even though on my own driveway and more than 10 times the 2M distancing rules. Cars can stay dirty for as long as the lockdown lasts…windows and lights (and sanitized interior) excluded of course if needed for weekly shop for essentials!

I bought a K2, which came at a great price from Screwfix, and included the T150 circular head for drives/decking.

It does what it says on the tin, so I’d recommend it, especially at the right price.

Good kit. The rotating patio cleaner is brilliant if you need it, and so much less mess than the spray.

Hi James, Karcher K2 is what I have & can’t fault it
The T-Racer attachment is a great tool for paving & other flat surfaces T150

Depends on how old your K2 is. Back about five years or so the build quality was outstanding. Now the quality is well not what it was. I bought a K2 last year to replace my old K4- opened the box and was shocked - that one had to go back as it developed a leak - on my second one and all is OK but buyer beware things ain’t what they used to be!

Also depends on you location and intended use. I have a karcher and it works well, but also have a petrol engine version for down the drive, where there is no electric for power (200 yards away from house).
Will post a picture later 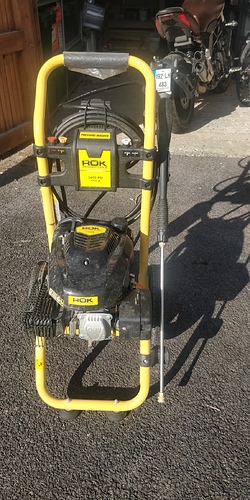 I did that a couple of years ago, and they sold me one that had clearly been returned due to a defect, which they had made no attempt to fix before selling it to me. A quick search online revealed that it was a widely known fault, and others had fallen foul of the same trap. Karcher refused to accept any responsibility. So my recommendation would be to look elsewhere.

I’ve got a Karcher K4.91 and have had it years without any major problems. My only gripe with the Karchers I have owned is that the attachment (not your garden hose) is made via a screw thread. I think it’s quite easy to cross thread and needs some care and attention to make sure you get a good connection.

I think the K4 is the “sweet spot” in the Karcher range. It is considerably more powerful than the K2: once you use a pressure washer for more than cleaning the car, you soon appreciate that it does a better job more quickly than a lower powered model.

The T-racers are useful when avoiding spatter is important, but do not give anything like as much cleaning action as the vario-lance or dirt blaster.

I would recommend storing any pressure washer indoors or well insulated from cold and frost over the winter. I failed to follow my own advice and a leaking Karcher was the result from, I expect, ruptured seals.

Many snow lances have Karcher terminations. I have a Karcher snow Lance and it is OK, but car detailers seem to prefer others (see You Tube et al). The thing is you want snow foam that runs slowly down the car, not the car washing equivalent of perma-frost stuck to the car bodywork.

Hi GeeJay,
Nothing in the emergency regulations about the activities you are allowed to pursue within the family unit at your place of residence.
The car wash thing was merely an opinion expressed by someone in the media and to be quit honest the media is being right pain in the ass with this Covid situation.

Not wanting to be the h and s police, but be careful with these things. A friend was cleaning his conservatory roof, steadied himself when the step ladder wobbled, the water jet went across his hand an d stripped away a big patch of skin. Bandaged for months

I had a Karcher for a couple of years after which it developed a leak inside the casing which rendered it inoperative. It had not been exposed to frost. I did explore fixing it but the parts were quite expensive. A bit miffed I bought a Nilfisk which has been really good and seems to be a much higher quality item - considerably heavier and the tools and hoses are more convenient. I’d recommend that brand as one to check out.

Folks - thanks very much for the replies. I suspect Karcher will get my money but i will take another look at Nilfisk too.

Another vote for the Karcher K4. The perfect combination of power vs price for me, and the variable lance goes from ‘gentle rinse’ to ‘paint stripper’ in the flick of a wrist…

Another vote for K4 here.

Karchers aren’t the best out there. Someone from the industry told me the domestic ones aren’t meant to have a life span of more than 2 months. Not sure if it’s true. Theres an Italian brand called IPC which are great. I hear the Nilfisk ones are good too.

Just a small tip when if using a pressure washer with a long hose run, : turn on the water at the tap and WITHOUT turning the machine on pull the hose trigger to get adequate water flow running through the system. You can hear when the pump is not happy due to low water flow.

Karchers are pretty reliable. Sure, some go wrong, but we had one at work that was several years old, used and abused, and still working when it was stolen from our yard…

I’ve had it for a couple of years and it has been excellent. However, if you do get one, be very careful with the most powerful ‘Lance’ tool. Don’t use this on anything other than paving stones. It’s incredibly powerful, and could almost be an alternative to an acetylene cutter. The less powerful variable pressure lance at half pressure is more than enough for any car.

I second BigAl’s comment about turning on the water supply before switching the unit on - very important!