I use time machine to back up my Mac (Mojave) which has usually worked without problem. Today for the first time I received the message that Time Machine had tried to verify the backup and failed - the options given were to create a totally new backup (not attractive sit takes overnight and I don’t want to keep ding that) or back up later, which means it will try tomorrow but not back up in the interim - again not ideal.

The only things that have changed recently is that I updated the QNAP to a TS131p with a new Seagate HD (everything has been fine for weeks after that was completed) and over the weekend there was a firmware update.

On checking QNAP I noticed that the “enable time machine” box in the Backup Server was no longer ticked - having reset it I’m hoping things will be OK for tomorrows backup.

Is this going to happen every time the firmware is updated? That would make it pretty useless for TM backups I guess - anyone else had this sort of experience?

I have had a QNAP 253A for about 3 years now and I think I’ve had the “Verify” message 2 or 3 times … I have just bitten the bullet and allowed a full replacement backup to occur … I did note you are still using Mojave which was superseded by Catalina back in the fall of 2018 … I have just replaced my Mac laptop in the past couple of weeks with no break in backup ops.

That’s the best I’ve got as far as experience and advice my friend.

Thanks John - that is useful as I contacted the supplier for my QNAP for a bit of advice and they suggested it might be because the TS131 is only 1gb RAM…but I think your 253 is 2gb and if you still get the message it doesn’t seem likely that is the problem.

Maybe I’ll just get a decent HDD and connect it to the Mac - QNAP are good but I do fine the constant firmware updating a pain - and for some reason neither of the QNAP’s I’ve used (previously was a 251) included the option for automatic updating, only automatic download.

Guess I should upgrade to Catalina, but I’ve been putting it off as I like Aperture so much, and that will no longer work with Catalina. 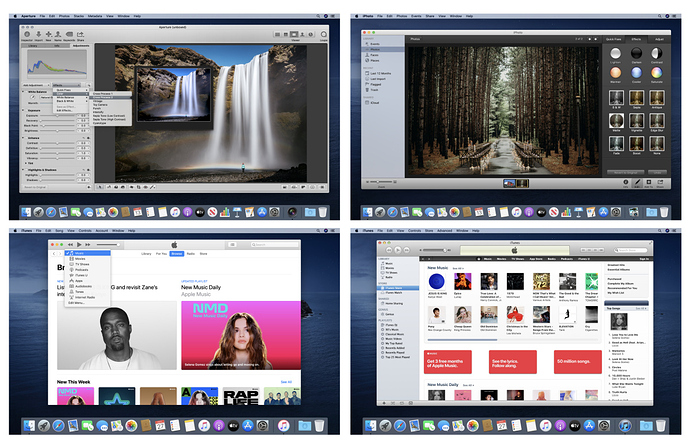 How to run Aperture and iPhoto on macOS Catalina

After saying goodbye to my perpetual copy of Photoshop CS6, I took the plunge and updated my Mac to macOS Catalina this Wednesday. The…

on how to run Aperture under Catalina

Useful - thanks, I’ll check out the link.

One problem I had was that the built in anti-virus on the QNAP was incorrectly quarantining files from within the backup (sparse bundle) as it was checking them like normal files, whereas they are really binaries. Solution was to exclude the sparse bundle from the virus checker. I also set up separate shares for each mac (because we back up 2 macs backing up to one QNAP) rather than using any built in functions.

I had separate shares as well - but had not heard about the virus checker issue. I had a response from QNAP recently which suggested the problem might have been that there was a firmware upgrade that changed the Time Machine backup function in the NAS - where before everyone had to use a shared account for Time Machine, TMBackup… now users can use their own user accounts for it. The thought was that the ore powerful NAS’s had this update a while ago, the 131 possibly only recently, although that is not certain at resent. Anyway that could well have caused my problem I guess - since I reset everything and did a fresh backup TM has worked as normal - no doubt the next upgrade will confirm those ideas.

One thing that was mentioned is that although the 131 is fine for streaming it is underpowered for TM/backing up - and a better NAS should improve the backup speed. I may try that when funds allow as my backups take ages, overnight or more.

One thing that was mentioned is that although the 131 is fine for streaming it is underpowered for TM/backing up - and a better NAS should improve the backup speed. I may try that when funds allow as my backups take ages, overnight or more.

That depends very much on what and how much is getting backed up.

It’s “normal” for the first backup in a series to take overnight, even with a direct wired connection to the drive. That can be frustrating if it keeps on failing.

You might want to exclude email and other large database type folders that regularly change and force a large incremental back up in the time machine settings (especially if the data is really stored elsewhere like on an email server). My delta backups take about an hour or so for a macbook pro 2015 with 512Gb flash drive either over wired or wireless connections…