Any reason why I can’t stream ’A tribute to LED Zeppelin’ via Naim app to NDX2 but can stream it on Qobuz app. Can them BLUETOOTH it to NDX no problem! 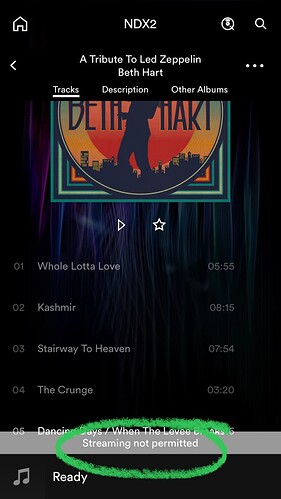 I can stream it via Qobuz using SBT.

One track was enough for me. You are not missing anything.

You are not missing anything.???
She`s amazing

I’m a big fan of Led Zeppelin and own the originals, but Beth Hart’s covers are fantastic too!

I’d also recommend that any Zeppelin fans listen to CC Coletti’s album “Bring it on Home - sings the American roots of Zeppelin”. A fantastic album, and her covers of “I can’t quit you Baby” and “When the Levee breaks” are just sublime!

It is not playing via Kazoo on my non-Naim streamer either.
It reports “Track not available”.
On Qobuz site all tracks are greyed out- only seen that when available to buy but not stream!
It worked a while back as I played part of it.
Have reported to Qobuz.
Obviously something strange/funny about this album.
UPDATE: It works on Qobuz App but not on their website!

How about Vanessa Fernandez? I have her album with Led ZEP songs. Prefer LZ without hesitation. But interesting however, not bad.

We’re huge fans of Beth’s. Her concert remains one of the best I’ve ever seen. I’ll give this one a listen.

Managed to stream it via the Qobuz app chrome cast to the NDX. Ok so it is not LZ but very good vocal voice!

In the Naim app there are two versions of this, a hi-res which you can stream and non hi-res where the numbers are greyed out. In the qobuz app I see only the hi-res versions !

In the Naim app when I go to Beth Hart in qobuz and expand the album list this is what I see. 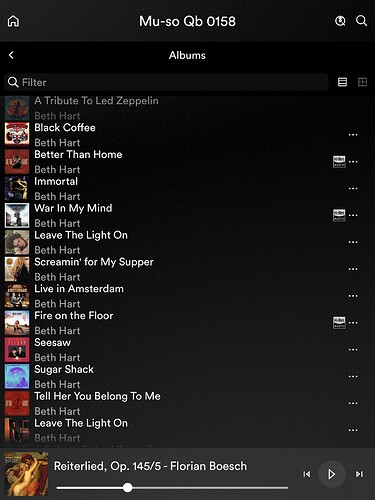 Top of the list is A Tribure to Led Zeppelin but this one won’t stream. Scroll down a bit and you see this 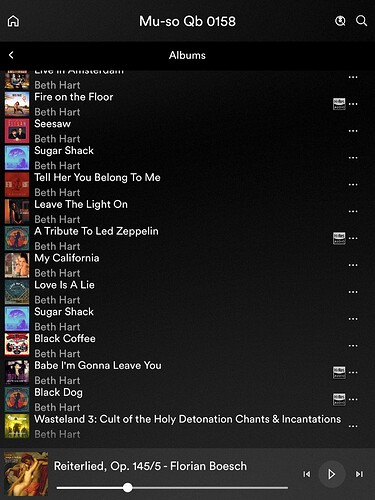 Note the hires label next to it and this one you can stream.

Have reported to Qobuz.
Obviously something strange/funny about this album.