Maybe I miss something obvious, but is it possible to get the albums from an artist in some sort of meaningful order when using Qobuz in the naim app? Spotify have this and it really makes it easier when you explore new music and artists.

As far as I know not when you go to the Qobuz input of the Naim app. The Albums view there only uses the order in which they were added, as far as I can tell.

But go instead to the Albums tab of the Naim app, below the inputs. At first this shows the recently added albums. Scroll down. At the bottom is hidden a button More… >. Tap it.
(I hate that this More button is hidden out of view, took me ages to find it)

Now it shows all albums. Top right is a little button A-Z, showing the current sort order. Tap it. Now you can choose what to show (Qobuz, Tidal, local) and in which order.

This assumes Android, I don’t think it is much different on iOS

It’s not even possible in the qobuz app itself. I’m not sure they hold or reference this data eg release date. 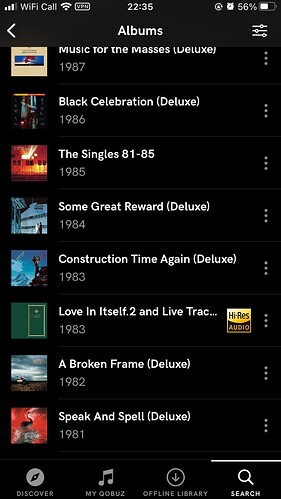 I always thought that if you are viewing all the available albums of a particular artist that they are in the order of frequency of play in Qobuz. That is the most frequently played album is first. Same goes for individual songs.
Not 100% sure though.

Release date can’t be used for sorting in the Naim app either. But the OP asked for “meaningful” in general and by Artist or alphabetically (by going through the Albums tab) is certainly more meaningful than purely the order added that is offered in the Qobuz input of the Naim app.

FWIW, Roon can sort either by original release date or the date of the particular release, forwards and backwards

I think he’s asking to see the discography for an artist in a sensible order. Roon does everything. Qobuz is better than it was (random order). If it’s an artist or band I don’t know, I might want to start with their first album, or most recent.

discography for an artist in a sensible order.

Ah yes, that’s true. I also do artist’s albums by release date. Well maybe the other sort options are helpful as well

Looking in qobuz via the Naim app, I can get to albums (that’s not easy!), but there’s no sort order available. 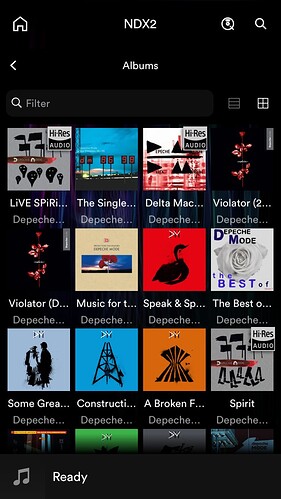 Thanks for the help and instructions! Looks like I need to use the Qobuz app to display albums for an artist with a release year. This is what I find most useful to explore a new artist with plenty of albums, but also for a well known artist to avoid scrolling through many sorts of releases.

Qobuz is an utter shambles, their so-called albums list is not even a list of albums, it usually contains a random mixture of albums, singles and EPs all muddled up.
Roon does a better job, even when it searches Qobuz content, but for me, by far the easiest way to find an artist’s discography is in Wikipedia, which nearly always has a proper chronological discography.

Agree. I wasnt sure if it were Qobuz or Naim’s version that was hard work; sounds like it’s both.
I want albums in order of release and albums. Not EPs, singles and other eandom tosh.
It can’t be that hard, nor unreasonable?

Spotify do this and you get albums, singles, EPs and collections sorted with their own heading and arranged with year of release. Should be standard for a streaming app/company to provide this. I guess Qobuz will improve as well.

quobuz do now sort recordings under album, single, live etc headings and in date sequence - latest first. there are some issues e.g. re-issues and the listings miss some albums (that are available if you select an album then look at ‘by the same artist’ but not grouped or sorted) work in progress i guess

Yes, that is good news. Hopefully this somehow translates to the Naim app as well in the future, when using it’s Qobuz interface.

I tried using the Qobuz app today and it sorts albums in relation to release year, which is nice. But now I feel a bit slow as I find no way to select the NDX2 as my device for audio output in the Qobuz app. The app has access to my local WiFi network. Shouldn’t the NDX2 Show up? Using the Spotify app the NDX2 is there to select.

Do I miss something obvious in settings, or is the Qobuz implementation with Naim different than Spotify?

Click the “rectangle with a rainbow in the corner” icon top right, and you should see your ndx2 appear. 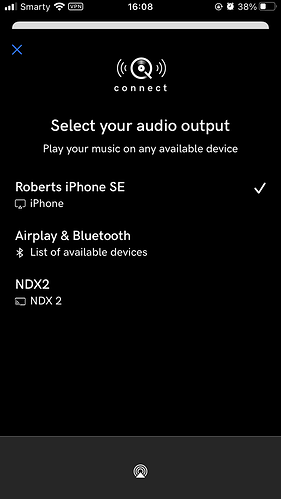 But the NDX2 is not there when I check this settning. Is it only available with Chromecast then, if using the Qobuz app?

As far as I am aware, yes, chromecast only from the qobuz app.

HI @LJS, When using Chromecast the stream is bit perfect and native upto 192kHz/24bit. The downside of Chromecast + Qobuz is that it’s not really designed to run at such high sample rates. The buffer sizes are far too small (hence prone to drop outs) and the Chromecast stack is very inefficient so uses nearly all the CPU time in the streamer. Not only is this bad for unit response times, but not also great for sound quality as the electric noise floor of the product increases as everythin…

You’ve probably disabled it in your ndx2, check the settings in the Naim app. 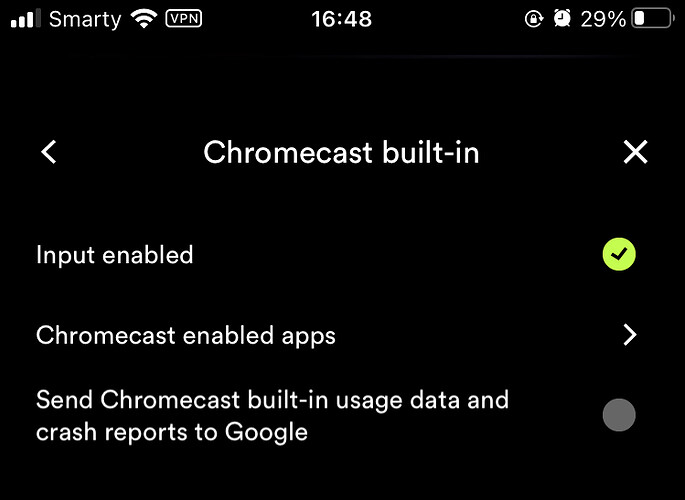 Fantastic, you are right of course. Many thanks for guiding me through this! Now my NDX2 shows up in Qobuz app and play The Doors.

I understand from the link that the Naim app is to prefer from an audio quality perspective and others, but now I also have this option when needed to get a better overview of the releases from an artist.