Hi, The Qobuz app does not see the Muso-2’s (I have two of them). So I have to use the Naim app to play Qobuz, which is just not as good an experience for finding music and navigating.

You need to select airplay or chromecast as output.
Heres the qobuz app on ipad, with option to send to qb gen 1. 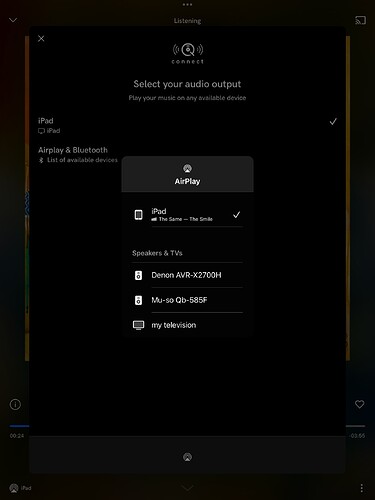 Thanks Robert, I tried to use Chromecast, but it doesn’t appear to be seeing the MUSO-2’s. Airplay can work, but for some reason, I thought it would be lower res…

airplay 2 can’t do hi-res currently so your right

You’ll get better sound quality using the Naim app. I sometimes use the Qobuz app to browse music, then save an album, track or playlist as a favourite. Then it’s easy to find it on the Naim app.
It’s not ideal flipping between the two apps, but actually it takes about 5 seconds so not such a big deal really.

Ok, so you’re saving it on Qobuz and then it shows up on the Naim app? That would be helpful, thanks! Maybe Naim could build their app to work like Qobuz at some time…

Why would it sound better through the Naim app than through Airplay 2? Do these work differently? I have been curious if Qobuz, AirPlay 2, Naim etc - some actually send the music from a device to the MUSO-2 and others just take instructions and stream the music from the internet? Any explanation appreciated. Thanks!

AirPlay sends the stream to and from the iPhone over WiFi whereas the Naim app iRadio input sends the stream directly to the streamer with the app just working as a remote control.
AirPlay also lacks hi-res support compared to most alternatives.

So Qobuz on MUSO-2 through the Naim app gets music directly from the internet, using the phone as a controller, but if you use the Qobuz app and have to use AirPlay 2 to send to the MUSO-2, then it is transmitting from the phone or iPad at lower resolution. Is this correct? Thanks!

Correct. You may, however, prefer the Qobuz app, in which case your options for playing from there to a Naim streamer are limited to Airplay, Chromecast or Bluetooth.
Tidal and Spotify both offer a ‘Connect’ option which allows you to cast from their app to the streamer without resorting to a lower res stream. Qobuz might eventually get around to offering this too, but don’t hold your breath.