I’ve only been using Qobuz for about three months now, for my Linn Klimax DS3 / Katalyst.

I get my weekly update on a Saturday morning. Having stated that Jazz was my preferred genre, I am really enjoying the Jazz Panoramas, that they send as part of the update.

I find these to be both interesting and informative. These are expanding my knowledge and understanding of the referenced artistes or labels.

This is allowing me expand my repertoire of albums and artistes, so is always giving me more Jazz to listen to during the forthcoming week.

I sold my Linn LP12 and Naim CD5 XS along with my records and CDs the same time as moving over to streaming. Having said that, I do not miss the deck and CD player, as I’m finding streaming easier to use and as mentioned, it is expanding the diversity of music that I’m listening to.

Some bonuses for me from using Qobuz are;

Well done Qobuz and keep it up.

You are getting more for less, while the artists simply get less.

Well let’s go back to good old copying then. The market has finally found an alternative but some don’t consider it ok apparently.

I mainly use Qobuz for browsing music. If I like it, I still buy it. I still curate my own music library - fully based on flac files - in case the service gets out of business. Besides qobuz I buy if possible from bandcamp, but back on topic: Qobuz is great for music discovery.

My guilty pleasure is the Digital Concert Hall subscription which allows me to watch the Berliner real-time. It’s also a way of supporting an important organization directly.

while the artists simply get less.

I listen to a wide variety of artists on Qobuz, those artists will receive payment.
If streaming didn’t exist I wouldn’t buy the music I listen to on Qobuz, the artist would therefore receive no payment.

Following on from what @anon4489532 commented, I did a bit of searching and it appears that Qobuz pay the artistes a lot more than some of the other streaming services. 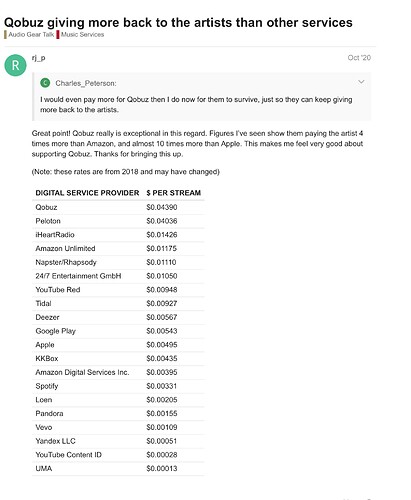 How does Qobuz support artists?*

Of all the streaming services out there, Qobuz pays artists the most/stream, though it still isn’t anything compared to directly supporting an artist through something like Bandcamp. Qobuz has a program that financially helps artists and it increased when all live music was suspended during the COVID-19 pandemic: in April to May of 2020, 100% of Qobuz revenues were forwarded to rights holders.

I thought that this was an interesting comparison. 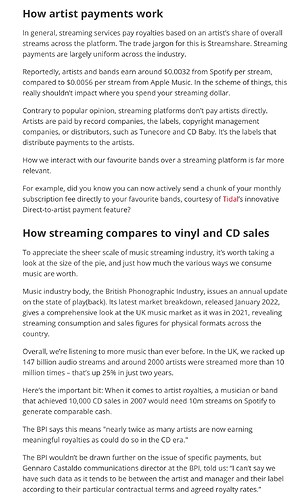 You are getting more for less, while the artists simply get less.

Whatever the right and wrongs I really can’t see the masses changing their ways.

Nothing to stop someone buying downloadable content from Bandcamp/band website etc or a CD/LP/cassette if one exists and you want to support a band you’ve discovered using a streaming service.

I didn’t really like Tidal’s system of giving 10% of your subscription to your most frequently played artist each month - these were often albums/artists I’ve loved for many years and had already purchased their content on one or more of vinyl/CD/cassette and had potentially purchased a digital download at some stage too. I would have preferred a system where I could have nominated where that 10% went each month, and that would have been to upcoming artists not highly successful ones who have probably had a decent slice of the cake over the years already.

It was actually quite interesting with Tidal to see how much I played old favourites rather than new music.

My Qobuz pays for itself to the extent that I don’t buy CDs out of curiosity anymore. If i like what I hear on the streamer, I will probably buy the CD, but I generally buy used CDs. Very little of the 50-60% that I save ever went to the artists, and they have already received one royalty for the original sale.

If CDs are for sale at a concert, I generally buy one or two and get them signed, if possible.