I have used Spotify for the past two & a half years since purchasing my Nova. For the amount I use it (only an hour or so per week), the SQ (OK) it provides is fine for £9.99pm. I am not prepared to pay any more for better sound.

My dealer advised me that, provided I pay for the whole year in advance, Qobuz is available for only about 45p more a month. This has proved true & I signed up for the free trial this past Friday.

The Nova was easy to set up for Qobuz & the SQ is noticeably better than Spotify so I will probably proceed with my subscription when the free trial expires.

However, even after quite a bit of time I find the Naim/Quobuz interface on my Android phone very clumsy to navigate both trying to find music I am looking for & looking for playlists ‘for me’, as per Spotify. It took me no longer than 10 minutes to work out the Spotify app. which seemed very logical & has worked well for me all the time I have been using it.

My question is therefore, are there any instructions for the Naim/Qobuz connection that I can read to see if there are features I am missing that would make using it any easier?

The stand alone apps on my PC , phone & android tablet are much more convenient to use & work in a similar way to Spotify. The Naim arrangement doesn’t seem to.

Any help will be much appreciated.

They way Spotify (and Tidal) work is via the ‘Connect’ feature which allows you to use their app to control your Naim streamer. Qobuz do not offer this option, although if you prefer to use their app instead of the Naim app you can do so by using AirPlay or Chromecast.
You could also consider a Tidal subscription as they offer a 16/44.1 lossless service and you can use their app. Personally I prefer Qobuz but you can always sign up for a free trial and see what you think.

Thanks for your help.

I want to keep thing as simple as possible & that is why I have stuck with Spotify for so long without trying alternatives.

SQ is better with Qobuz & I still have over 3 weeks of the free trial left to see if I can get better acquainted with its’ interface, which in my opinion, is nothing like as user friendly as Spotify. I want to use Quobuz direct from the Naim app as they obviously intended.

At this stage I will probably switch to Qobuz as I don’t actually use a streaming service long enough each week to bother about it & it’s nice to find a better sounding service for approximately the same price.

Presumably, you could use the Qobuz app or website to do your browsing, mark the track / album / playlist as a favourite then pick that up in the Naim app to actually play.

I’m not a Qobuz user, but this would work in Tidal (even though you don’t need to with the Connect feature).

I found casting from the Qobuz app a more user friendly interface. The Qobuz search engine seems better, and i really like the ‘my weeklyQ’ and listen with, and other content that you only seem to get in the app.

Also it will actually play your favourite tracks one after the other, whereas the Naim app will only play the one you select

Only down side, if you consider it a problem, is it takes a few seconds to ‘cast’ but only for the 1st track after that its fine

I have used Spotify for the past two & a half years since purchasing my Nova. For the amount I use it (only an hour or so per week), the SQ (OK) it provides is fine for £9.99pm. I am not prepared to pay any more for better sound.

I find that a little confusing - do you only use the Nova an hour or so a week or is streaming a minor usage compared to playing local files from a NAS or similar?

If you purchase music/downlods a lot the £15/month Sublime option is very good value IMHO due to the savings on hi-res purchases.

The basic Studio package is just over a tenner (presumably paid annually)*, provides hi-res and is far cheaper than CD quality Qobuz was a few years ago: 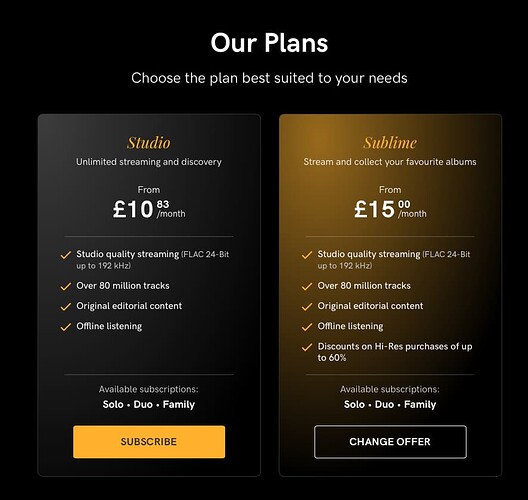 Provided Qobuz meets your musical tastes catalogue wise seems like a no-brainer to me.

Admittedly I’ve never tried Spotify which from all accounts probably excels in curation/searches.

Reading it back I see what you mean!

My Nova get rather more than an hours use a week. Vinyl & local streaming from my Core plus a bit of internet radio. Hence the limited Spotify use & loathing to increase subscription costs to more than I pay at present.

Spotify SQ is good for what it is & perfectly livable with but my dealer pointed me to the very similar cost (when payed annually) Qobuz which I made the mistake of trying & noting the improved SQ. I don’t purchase many downloads so would not pay the additional £5pm at present.

I am enjoying what I have heard of Qobuz since I began my trial last Friday so will likely stay signed up when the trial period expires & hope I have overcome some of my initial reservations over the less effective interface than I have become used to with Spotify.

To be honest, I was disappointed when Spotify abandoned their Hi-Res plans as I would have almost certainly gone down that route.

Thanks for your useful contributions.

If I continue with Qobuz & don’t adapt better to the direct connection in the Naim app, your suggestions may well enable me to maintain a similar level of functionality that I have with Spotify.

For the moment I just want to keep use as simple as possible without any extra complications.

It is £12 ish without the discount to buy downloads.

Is the £10.83 figure pictured above for an annual subscription but more like £12 paid monthly?

Is the £10.83 figure pictured above for an annual subscription but more like £12 paid monthly? 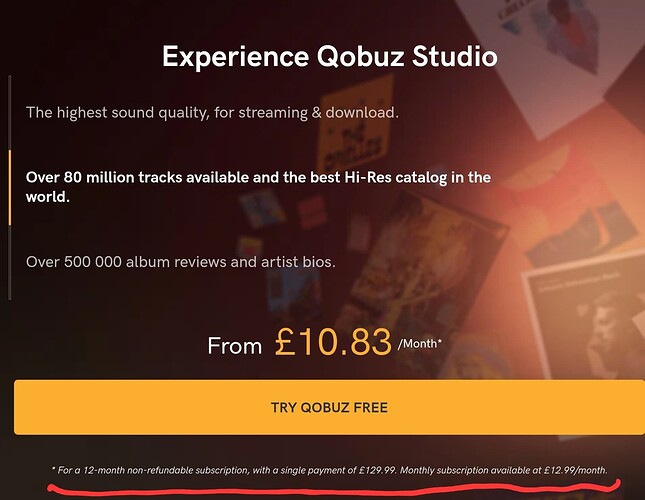 I do exactly as Gavin described.

I stream Qobuz from PC to QB Mk1 via optical. (The QB makes a very nice PC speaker). Anything I like gets marked as favourite, for playing on the main system later.

Sounds cumbersome, but I much prefer browsing on a PC than phone.