They did that for U.S. subscribers late last year. I’ve been paying $14.99 for maybe the last 6 billing cycles or so. I have TIDAL on the 90 day for $5 deal, but will drop it once that ends.

You’re never trapped! Just leave whenever you’re ready. Unless you know something we don’t, in which please enlighten us.

If you cancel your tidal subscription and then reignite it say a few months later does it remember all your albums, playlists etc?

Yes, Tidal remembers your favourites, I. Cancelled a couple of times when I was away for some time.

I didn’t get the offer, must be something specific to where you live.

I think your next monthly payment will automatically be reduced

Has anyone seen how much sublime is now?

Already posted I know, but my email this morning showed: 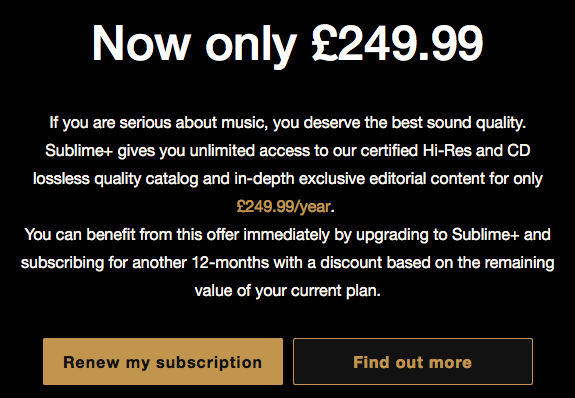 I’ve had the standard Sublime since it was released and seem to be on a ‘gransfathered plan’ of around £160. So I get CD quality streaming and the significant discounts off purchases.

The extra £140 for Sublime+ was tempting, but I;d lose my discounted Sublime rate. This price cut makes Sublime+ much more tempting to me.

I asked them ages ago, but would love it if they could offer a ‘Family’ subscription - in reality perhaps there’s less call for that due to the catalogue offering more classical/jazz than most standard competitors and my kids/wife are not likely to want much of that!

I’m very tempted to go for the upgrade to Sublime+ at this new price.

Yep pleasant reading this was. They must be feeling the pinch to drop by £10 a month. …

I truly hope that’s not the case - I do hope the labels offer reasonably similar terms to all providers, though you’d imagine the Spotify/Apple/Amazon setups might get cheaper pricing due to actual customer numbers compared to smaller outfits. It would be anti-competitive to say the least to charge a smaller service more for the same service, but probably happens and why we need to support the more bespoke outfits if they are to survive.

It was quite refreshing that Qobuz cut the cost for existing subscribers, too often cutting pice is only for those signing up. I had this argument with Sky in recent years, eventually they reduced my subscription after doing the cancellation ritual.

The only reason now for anyone with a second generation Naim streamer not to switch to Qobuz from Tidal is the slightly better catalogue for some genres with Tidal…or am I missing something?

No Nigel, that sums it up, I have run both in tandem for over six months, not much missing from Qobuz library for my taste in music.

It was quite refreshing that Qobuz cut the cost for existing subscribers, too often cutting pice is only for those signing up. I had this argument with Sky in recent years, eventually they reduced my subscription after doing the cancellation ritual.

I’m no real fan of Sky and got rid of it over a decade ago - too expensive but primarily because virtually all content was poor quality SD and when I was more into home cinema back then I just wanted to spend money on better quality movies on DVD and later BluRay/4k UHD.

When my father died in late 2019 I was dreading, based on my own experience trying to leave all those years ago, having to deal with Sky who provided his broadband/phone as well as a basic Sky package.

I really felt they would be awkward especially having searched online and seen threads on fora where people had had difficulty finding a relevant number.

Eventually I tried one of their numbers and the lady I spoke to could not have been more courteous, professional and understanding.

I called them as soon as the direct debit would have failed due to his accounts being frozen. I was told they would waive any unpaid charges after his death, and that I had the option of cancelling or taking over the account on a short/longer term basis - it was made clear that cheaper options might be available for longer term commitment which made sense.

I knew I did not want the Sky Package but was unsure whether or not to keep the landline/ADSL service. I vacillated for many weeks, and have still not called them back.

The other day two letters arrived at his house - the first seemed automated saying as the direct debit had failed they would terminate the service within so many days and if he was happy with that to do nothing, or otherwise call to recommence a subscription. The other letter from their customer services to me noted a recent bereavement and was incredibly polite just asking me to contact them when I knew what I wanted to do.

Contrast that with TV Licensing sending an accusatory letter advising the ‘case’ would be passed to the local ‘enforcement team’ as ‘something has changed at the property’. Happy to pay my licence or subscription just get rid of the TV Licensing Authority!!!

Yes got the price reduction email today… happy days… My Studio Pemier 14.99 now… quite a reduction.

I wonder if they are just simplifying their subscriptin tiers.

They used to have a CD quality classical only plan which I think was ditched, though was cheap.

I could never see any sense in their MP3 quality subscription if their raison d’être was better quality streaming audio.

They got rid of my standard Sublime subscription a few years ago though I remain on it.

From what I see, have they simplified it to hi-res monthly/annual vs Annual Sublime+?

Sorry for the long screengrabs but for the UK: 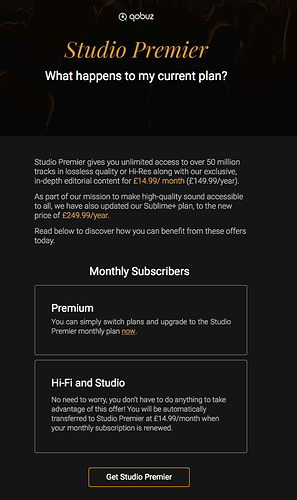 Yes got the price reduction email today… happy days… My Studio Pemier 14.99 now… quite a reduction.

While I appreciate many simply stream, the Sublime discounts on hi-res purchases are very significant if you regularly buy music from them.

It was called Qobuz Studio previously and was 24.99 a month, the premium for upto 192/24 streamed media.
Nice to see not everything in Hi-Fi has regular price rises…

This may all just be a preemptive stike against Amazon HD.

This may all just be a preemptive stike against Amazon HD.

They’re never going to usurp Amazon’s position, but I’m always amazed that people are happy to spend thousands on boxes for playback, but are unhappy paying a bit more every month for a better quality streaming service. There are just too many compromises with Amazon 's offering currently.