Can anybody confirm what is the pricing discount between normal Qobuz Hi-Res purchases vs if you have a Studio Sublime subscription? Any country will do, but I am in NZ.

I am trying to decide if Hi-Res purchases are worth it all or should I just keep streaming.

Also did you notice any difference in quality both good or bad between purchased files vs streaming direct from Qobuz?

I am trying to decide if Hi-Res purchases are worth it all or should I just keep streaming.

That pretty much depends on who you are. If you have some special interests, are a collector or curate your own metadata then having your own local music server is very much nicer, you will probably be picking up music from wherever you can find it.

I have also found the sound quality from a local UPnP-server like Twonky or Minim is better than the alternatives like streaming from the internet. But I’m sure there are others who dont agree on this.

I use Sublime and buy downloads from Qobuz. But I buy from other stores to, including CD:s that I rip.

@jan I am only asking in relation to Qobuz not other sources.

So when you say that the for you SQ is better from local server are you talking in general or specific to my question…purchased Qobuz file vs same files streamed direct from Qobuz?

Thanks @jmtennapel, I see now. Album I checked didn’t give me sublime pricing, only cd quality. But I kept searching different albums and some had the price.

Do you with your system hear the difference between purchased Qobuz album Vs streaming from Qobuz? And if yes is better SQ?

Do you with your system hear the difference between purchased Qobuz album Vs streaming from Qobuz? And if yes is better SQ?

Thanks for taking the time to respond @jmtennapel , good information that others will also appreciate. I do use NDX2 and so far I have only streamed, never felt the need to purchase, it was something I have been wondering about. I think it’s made my decision easier. I think I will stick to Premier for now.

Yeah, the difference with the older streamers is well-known. The established hypothesis is that uncompressing the flac adds (a little) computing effort, whose effect of making the streamer more busy is apparently noticeable on the older streamers, which have less power to begin with. Hence letting the UPnP server do the work for local content, by transcoding to WAV before sending to the streamer. (I guess with online content this might be possible by using BubblePnp Server to transcode between online service and streamer. Which people with old streamers use anyway for Qobuz)

With the new streamers like NDX2, which have more power, the large majority of people seem to report no difference between FLAC and WAV, and hence usually online vs. local. However, some people still say they hear one, though probably smaller. I don’t.

I was just checking settings on both (prior to reading this thread) , and switched the Qobuz app settings (highest) to hi res. Afterward this popped up: 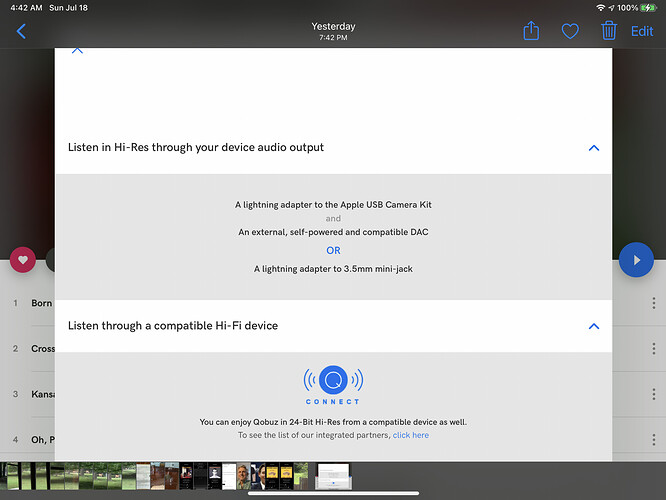 image2048×1536 217 KB
Which is saying to do the same thing we need do for Apple Music to listen to Lossless Apple Masters.

The lightening adapter to 3.5mm jack is limited I believe correct, and won’t stream hi(est) res?

Also, does an external self-powered DAC affect sound quality and thus one is better than another? Is consensus here the Toppin D10 the best?

Also have you not noticed that with the streamed services tracks offered can suddenly disappear. One week, you have them in your selected listing and maybe even a playlist, and the following week gone.
If I like something and want to “play it again, Sam”, a local copy is sourced, so I have it and it can’t disappear on me.

Also have you not noticed that with the streamed services tracks offered can suddenly disappear.

It happens, but in most cases it’s only that for some reason the album ID changed or something, so if you search for it again, it reappears and you can re-add the track to the playlist. It’s more rare that an album disappears completely - but yes, can happen, and I also buy what is really important to me, usually on vinyl though

That is my confusion. So what I do, access Qobuz through the Naim app, gives me the encoded sound quality (hi res when that’s the track?) Why did I see that page (above) I wonder?

So, when I stream from the Naim app, basically the iPad or iPhone isn’t involved and hence the high res capability correct? It’s the Naim accessing Qobuz via the router. Which also explains the hassle with Apple Music. As it’s not-native I guess is the word-as is Qobuz and Tidal et al, Apple music does run through the device and thus the DAC is needed. So the Topping D10…good?

So, when I stream from the Naim app, basically the iPad or iPhone isn’t involved and hence the high res capability correct? It’s the Naim accessing Qobuz via the router.

Exactly, when using the Naim app you are not really streaming “from” the app. The app only tells the streamer which album to play, the playing is done directly by streamer. (You can turn the phone off and the streamer will continue)

I have had it for about a week, had the normal subscription before
It gives you around 33% discount on the normal hi res price.
Take daft punk, random access, hi res 88.2 kHz, normal price is £11.99, studio sublime £7.99.

I decided to get it after melco added qobuz to its direct download, so easy and great sounding

I’ve got a legacy Sublime account with unlimited CD quality streaming but discounts off hi-res for much of the catalogue.

They used to quote discounts of 40-60% off much of the catalogue a few years ago. Discounts are not available on CD quality which is a shame for titles not available in hi-res as physical CDs are generally cheaper so they miss out on sales. Discounts seem to vary a bit by label, it’s not uniform.

For me the Sublime benefits are worthwhile especially with new releases which can often be purchased in hi-res for less than CD quality.

Does hi-res make a difference? For some things yes, others not so sure, and I’ve certainly purchased things in hi-res that have underwhelmed me.