I am sure many of us have done it. It is a temporary case of Shuffled Brains, don’t worry about it.

FWIW - There are time I have found albums, especially new releases that may only have limited tracks available until after the release date. May not have been the culprit here but have had that occur in the past.

I think Qobuz is the issue, i regularly download offline content, albums are working fine but any playlists just does nothing, this is all via mobile, not noticed issues via Innuos

Regarding this issue, I’ve heard from Naim as follows;

We are aware of an issue some Naim users are having when streaming selected 24bit/192kHz high-resolution files from Qobuz, where the stream becomes interrupted, or ‘stutters’.

This issue did not arise in pre-release testing and is not affecting all users or indeed all 192kHz format files. We’re currently investigating its causes and developing a fix.

We hope to have a patch release out with our Beta Testing team by next week, and as soon the fix is verified to work we’ll roll it out in a firmware upgrade.

In the meantime, if you encounter the issue, you can stop it occurring by limiting the input settings of Qobuz to 96kHz. You can easily make this change in the Naim App, by going to:

Richard, I followed your advice but tracks still skip about all over the place.

John, any particularly bad albums…i have a couple of rolling stones, sound garden etc. If you let us know , when a beta firmware is released, happy to try a few other albums to see if the fix works?

Thanks Gaza, I’m in the middle of changing my Qobuz trial to another account which may have interfered with my current set up.
I’ll wait till I’m set up on the new account before I try again.

@Gazza, I found the constant 2 sec dropouts on the Qobuz 192kHz stream of Ben Harper’s Welcome To The Cruel World album. Maybe you can beta test this when the FW fix arrives.

Thanks Nigel, will do.

Richard - the advice does need updating as it is affecting some tracks on 96/24 as well. Will should be aware. 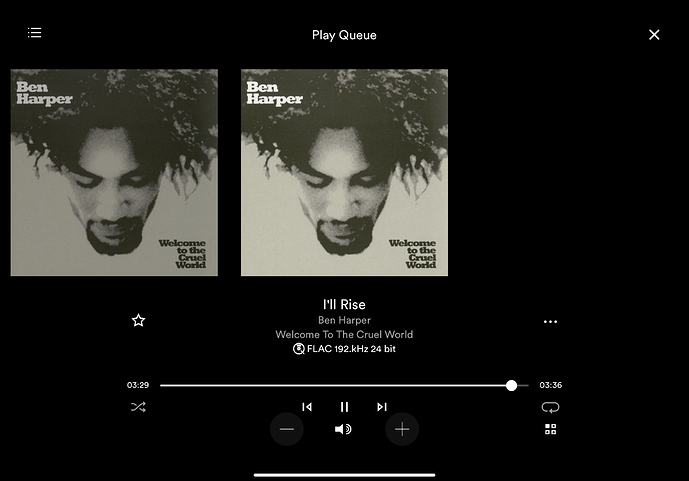 Nigel, if this is the album all played OK quite a nice album in fact.

It is a nice album, but apparently the stuttering/dropout problems with hi res Qobuz streams does not affect all.

Yes I’ve only had it on a couple of albums most play fine rather strange indeed.

hello, stuttering/dropout was here for two days, Naim Atom and Qobuz, did not change anything in the settings, problem has gone alone… strange

I have a question Guys…lI’m streaming music from quboz into my n555 First day…I also have a Melco n10 as a server to my files,is there any any influence in terms of sound through my Melco?

Why don’t you tell us!

I think the issue is at the Qobuz end as around the same time if it try and download anything offline it refuses to do so.

Playing around I think it is Qobuz change subscription settings, just a theory, finding this on Android only though.