Looks like the subscription price war is heating up …

Qobuz says No to MP3 in Move to All Music, One Price Plan, Studio Premier

Qobuz, the Hi-Res music service that launched in the US this February, is completely eliminating its MP3 (lossy) streaming

No MP3 will make the planet a better place!

Good riddance. MP3 is Steve Job’s contribution to the destruction of hifi.

Good riddance. MP3 is Steve Job’s contribution to the destruction of hifi.

I didn’t think it was developed by Apple, only that they used it in their mp3 players (to good effect the iPod generation will say), also used very widely by other brands, mobile phones, car players, etc, with devices still in use today. I think the format therefore does still have a place, though with the greatly improved memory density and cost today, and power of processors able to handle bigger files, it is becoming obsolete even for small portable self-contained music players.

But certainly it is not hifi, while those still wanting it for use in portable devices it is easy to convert file format to create an mp3 collection, including batch convert.

Apple use ISO/IEC AAC. Not much better perhaps.

MP3 was developed by Fraunhofer in Germany a long time ago (started in the 70’s I think) and was optimized for delivering german schlagers to muzak subscribers for elevators etc. (one dominating singer/soloist in the center) over the 128kbps ISDN-network. It was certainly never intended as a HiFi-medium and it is unsuitable for more complex music.

If you need high levels of compression, for 192kbps and faster MP2 (MPEG-1 Layer 2) is preferable, not so steep psychoacoustic filtering and handles all types of music better.

Ditching this will kill the mobile app. I’m in London and even I cant stream lossless on Qobuz for any decent length of time, same goes for Tidal unless at home. On the move it’s just hopeless too many blackspots. Bold move I suppose to make them stand out from the crowd. The will need to improve their buffering system to have any chance of it working effectively as currently it sucks.

In my world, even the lowest res streaming from the web is unreliable, other than at home, where I can just get away with streaming 16/44 consistently. If it matters, I play from local storage, especially when travelling, so mp3 and AAC have no place for me.

These days when mobile I play music uploaded onto my iPhone. It does have enough memory to be able to do that direct in flac, so I have no need for mp3. However, I know people using mobile phones with insufficient memory and so still use mp3 - but as I indicated in previous post, it is easy to convert to mp3 (or alac or anything else)

I don’t stream online for anything, but even if I did, I don’t think it would be workable for travel use, as trains in some countries (notably Britain!) often don’t have WiFi and phone connections are too intermittent, London Underground has neither (at least still not on the lines I have travelled on), and no good on planes.

Whilst it is probably an unnecessary provision these days, it is unclear exactly why Qobuz is dropping it, though as someone suggested maybe they want to make a distinction between themselves as the pure HiFi source and Tidal as one more populist oriented with its MQA and Sony360 offerings - or it may simply be that they simply don’t sell enough to justify it, especially if perhaps they find it a nuisance to curate the doubled content.

I didn’t say Jobs invented MP3, nor did I intend to imply it. But he made it the benchmark, a standard that everyone accepted, and it mostly killed hifi off with iTunes and its lackluster, lifeless, compressed playback format. I listen to classical and jazz and never could enjoy hearing it.

I was never a fan, and I’m not convinced all the mobile devices did any good. Now everyone is plugged in and disconnected from the world & everybody else. I’m a cyclist and especially notice how true that is. I can no longer cycle safety on shared paths because everyone is so plugged in they no situational awareness, making themselves a safety risk to others. I don’t even bother greeting neighbors anymore while walking my dog. They won’t hear me anyway over their ear buds.

I’m a cyclist and especially notice how true that is. I can no longer cycle safety on shared paths because everyone is so plugged in they no situational awareness, making themselves a safety risk to others. 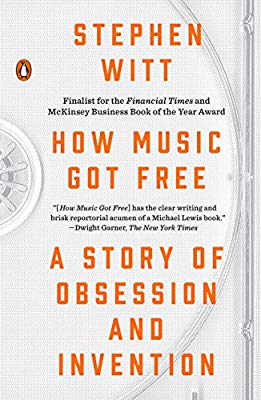 How Music Got Free: A Story of Obsession and Invention

Steve Jobs and Apple had nothing to do with MP3.

Slightly off topic, but referred to by others in several earlier posts. Apple consistently disregards even the existence of higher res music, continuing to cater for the lowest common denominator. It’s high time Apple introduced better sound to its products. For a company which prides itself on quality, this area is sadly lacking and largely ignored by the press.

Ok, this is Steve in his house with his 90s system Magnepans and all.

Apple actually hired well-known audio designers for the audio electronics in many products but you have to understand a macbook that require a 555DR would be a difficult sell on todays market. Apple also built Core Audio into the kernel of its OS, it just works. 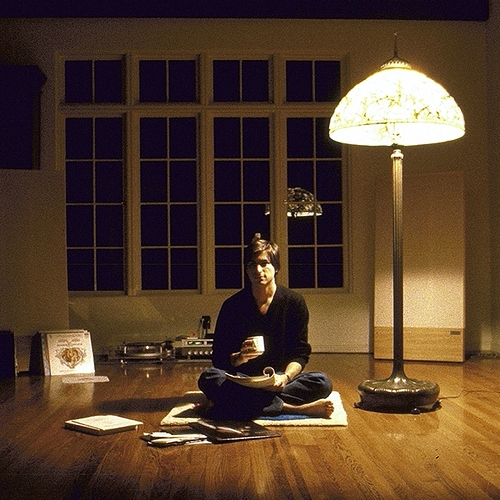 None of this changes the fact that with iTunes Apple dumbed down hifi to make lowfi the standard accepted by most consumers. Apple still shows no interest in hifi audio, nor for supporting FLAC as a standard audio file format. But like I said I’m not really much of a fan of mobile audio anyway.

I get that Apple did better with their desktop and laptop computers, but while I have Macs for my work and personal use, I never use any of their audio capabilities (nor do I have a need to).

None of this changes the fact that with iTunes Apple dumbed down hifi to make lowfi the standard accepted by most consumers.

Move yourself 20 years back in time. The download stores at the time - they all used Microsoft DRM which did not work with Apple products. iTunes was originally created to support Apple customers. The bandwidth of the average user at that time didnt support any redbook streaming.

And most HiFi-manufacturers were many years from this market.

Sorry, I’m not doing a very good job articulating my perspective, but it all doesn’t matter anyway, so I’ll just drop it.

I raised a question about Qobuz dropping MP3 in the ROON Labs community.

Apparently Qobuz are only dropping the MP3 subscription plan, but MP3 is still available under all subscriptions.

Before realising this, I thought that was a bad move as this would eat into data plans when out and about, but it doesn’t appear to be the case.

I hope this is true.