OK, not specifically NAIM content except it plays through a NAIM system but couldn’t think of anywhere else to ask the question. This FM4 has a low level hum/ticking when in use and it’s not mains frequency. It’s not very loud on some stations as on others but I know it’s there and I listen for it all the time and so it’s annoying. I could send it off to Quad for service/repair but that will cost about 4 times the second hand value of it. Repairing and re-aligning tuners isn’t a straightforward job and may need specialist equipment. Does anybody know of anyone who could have a look at it in the NW England area? I want to keep this one because it has the battery mod and the chipset to allow 16 stations on it.

Quad service is very cheap actually. Much cheaper than Naim. Quad charge a fixed sum to repair a unit plus parts. I think for an FM4 it’s about £75. They repair rather than service units, so change broken bits rather than bits that might be ageing, which is no doubt part of why Naim service costs more.

Anyway the fault sounds like the power supply capacitors need replacing. There are three of them and they are inside the metal box that is revealed when you take the tuner out of its outer case.

When my FM4 started to hum behind the programme material, I changed those capacitors and it fixed the problem. I think any TV or radio repair place could do that in half an hour or so.

Incidentally a working clean FM4 with that mod is probably worth £200 or thereabouts on eBay, so even sending it to Quad for a service wouldn’t be three times the second-hand cost!

Thanks David. That’s useful to know. I could change the caps myself. Is there a recommended cap upgrade I should consider? That won’t be difficult. If that doesn’t fix it then I’ll pack it off to Quad and let them have a look at it. Can you send direct to Quad or does it have to go through a dealer, like you have to do with Naim stuff?

It’s easy to do yourself. As you know it’s two screws to take the cover off and then it’s two or three screws to loosen so as to be able to take the metal top off the power box. There are two remarkably small capacitors immediately obviously in view and a third smaller one in the same compartment. All of them are coaxial (ie a lead at each end) but I could only easily get ones that have both leads at the same end, but it’s trivial to bend the leads to fit. You just turn the unit over to get to the other side where they are soldered.

I used a solder sucker to be able to take the old caps out, but you could use solder wick or you could cut the old leads off and then use the old component lead to clear the hole as you remove them. You have to get the polarity right of course, but if you are contemplating doing this yourself you will already know that! I took a photo before I started unsoldering things because Quad has occasionally been known to mislabel their pcb, so I suggest don’t rely on memory aided by the pcb labelling!

I forget the capacitor values off hand. I could probably find my eBay order if you can’t read the values easily. I bought capacitors with a higher working voltage as I thought the ones they had used were a bit marginal. Modern caps are smaller anyway. I didn’t look for audiophile caps or anything like that. This is all small beer in terms of power supply technology!

I can’t guarantee that this will fix it, but if it’s a new problem rather than something you encountered from the get go, then I think it’s almost certain to be these caps. One of mine was visibly domed and another had a hint of a deposit around the wire at one end. So their time had come. And mine is a quite late FM4.

You should take the usual ESD precautions obviously.

Oh and yes you send to Quad yourself. Ring first to check price and whether they can do it reasonably quickly. They send you an email when it’s done, you pay through their platform and they mail/courier it back to you. Pre-Covid they were taking 4-6 weeks to turn things round. I don’t know how it is now.

Ah yes. I always take pictures before pulling anything apart and draw diagrams of which screw came out of which hole etc. to make sure it all goes back correctly. If you could find your ebay order that would be good but if not then I should be able to find what I’m after I suppose. Thanks again. Good advice. I love the sound of my FM4 when it works properly and had many tuners (some much more expensive) in the past and none have bested it.

Just had a look. The two larger coaxial caps are 25v 1000mF rated to 85degC. The other smaller cap isn’t coaxial and I can’t see what it is so I’d have to de-solder it to find out its capacitance is.

Ok I have also been looking! I fitted 1000 uF 63 volts for the two bigger capacitors. And the smaller capacitor is 470 uF and I fitted 35 V. It runs very cool so I don’t think temp is an issue. The circuit diagram shows a fourth capacitor the other side of the regulator chip which is 220 uF. I bought one of those too, also 35 v. But in the event I didn’t look for that.

And here is that bit of the circuit diagram: 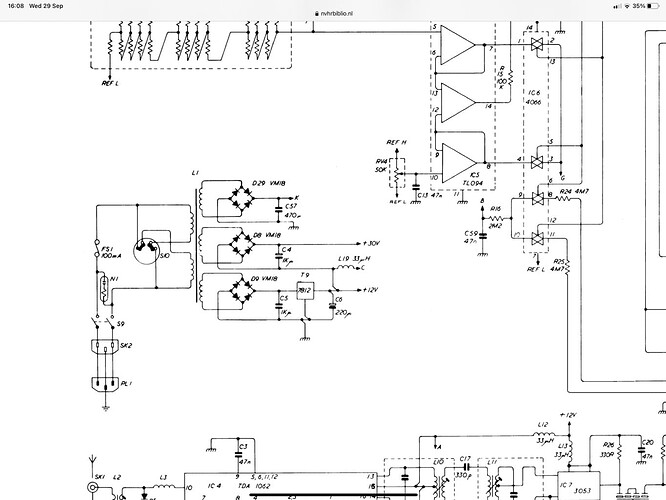 That’s great. C4, C5 and C6 then. I can only find radial caps and I like to keep the leads short to avoid increasing the capacitance but I’m sure they’ll be OK. I’m assuming I can just replace them with bog standard dry foil caps rather than going for something more exotic. It’s in the power supply do probably no need.

Exactly and additional lead capacitance isn’t really an issue with a 1000 microfarad capacitor!

I think they are not critical so just buy what you can get. I see I paid about £5 for the four…

Well it’ll only take half an hour to fit them at most so I’ll see how it is when they are swapped out. Thanks for your help. Much appreciated.

Good luck! Please do let me know how it goes.

I will mate. I’ve ordered the caps so I’ll have a crack at it on Saturday morning.