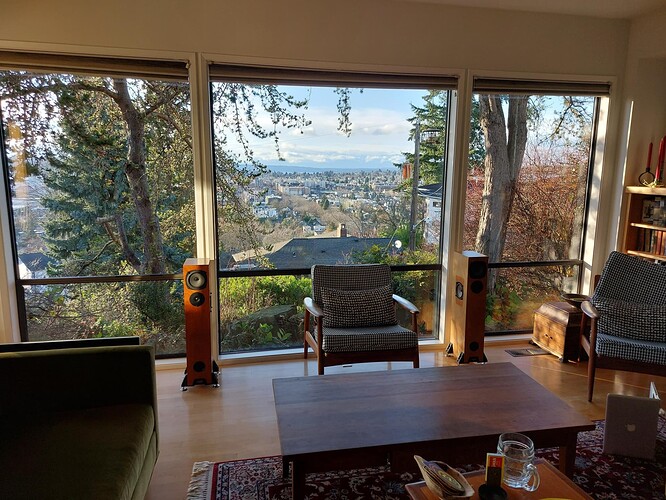 I don’t think glass itself is a problem, as much as the way it is mounted. If there is any play in the frames that could cause them to vibrate it’s going to cause problems. If they are solid I think they’ll be fine.

Your current speakers don’t look huge. Large drivers that move a lot of air at low frequencies might be more likely to cause problems.

As far as being rear-ported is concerned, I guess it depends how close to the wall the speaker ports will be. aside from the possibility of resonance of glass panels, which would colour the sound, a significant problem is the large acoustically reflective wall - it would apply whether or not glass, the more so the more reflective, and glass is more reflective at high frequencies than many constructions, behind the speakers. The result will be comb filtering of higher frequencies. Placing something absorbent or diffusing behind the speakers when playing music would likely be desirable and beneficial.

I do have blinds which I drop for serious listening - it does sound better. Wondering though if that will be more an issue with rear ports. We have a great view though and lowering blinds for music sessions is not optimal.

It greatly depends on the port. I have some Omegas which are rear ported and are stated as being suitable 15cm from a rear boundary. In their case the port is very large and fluted with a nylon diffuser. It’s not like the wall is hit with high energy.

I suspect from the pictures, you are probably okay. They don’t seem to be hugging the wall and glass doesn’t reinforce low frequency energy that well. You can experiment.

I have Spendor D7.2s in front very large window. They are rear ported and have no issues. Very easy to place and have an incredibly fast response for a ported design. Note that the A series has a different port design.

You also have to factor in sunlight causing changes to the wood veneers on your loudspeakers
Should see what @ChrisBell has to say. He has very similar layout.
Both of you have beautiful rooms and views btw
David

lowering blinds for music sessions is not optimal.

You could get a some acoustic absorbent panels, perhaps about a foot wider than the speakers each side and a foot taller, the thicker the better but even just a couple of inches would be far better than nothing, keep them elsewhere but when listening other than casually pop them against the pillars/window behind each speaker. ( For practicality each could be composed of a couple of smaller panels stacked.) That is what I’d do.

A glass wall is like any wall in that it will reflect bass from a rear ported speaker as it gets closer. Many British speakers are designed to be placed closer to a back wall (Naim, Rega, Kudos, ProAc). My ProAc K6’s work well about 16" from my glass wall as they are bottom ported. You may find you need to move a DeVore Fidelity speaker further away.

I would reach out to John DeVore and send him a photo of your room. I’m sure he’d be delighted to help.

Sunlight can damage (dark or fade) wood veneers. I had a custom set of covers made by a California company called Studio Slips. ProAc was kind enough to supply the dimensional drawings for the K6 Sigs.

OP: do you live in Seattle? Your view looks like Phinney Ridge.

If you have to site rear-ported speakers meant for open space too near a rear wall (of any kind) you might be better off putting foam plugs in the ports. I have Dynaudio speakers, all rear ported. Dynaudio provides foam plugs for that very reason but recommends siting them 1+ m (optimally) from front/side walls (.5 m minimum). Any closer and it’s probably better to insert the plugs.

Hey Chris, yes I do! Straight down below the zoo, about halfway down.

I know what you mean about fade - you can see the suntan line on the right RS3 left by the grill that I used to leave on. It honestly doesn’t bother me though.

I definitely don’t want to pull these out much from the wall - six inches ok, eighteen no - esp considering the depth of the Devores.

It’s interesting, Steve Gutenberg says not to worry about rear ports being too close to rear - essentially at least the diameter of the port, but more not necessary.

I’m honestly all over the place in terms of new speakers. Chris, Dominic’s been tantalizing me with SBLs, the ATC 19s seem interesting, Devore’s…I’m all over the place. In the meantime, the RS3s are great and have ridden all the upgrades very well - it’s starting to be a somewhat high spec system - but I can’t help but wonder if it’s time…these were part of my startup system 15 years ago (42.5 and 90 with Marantz CD63…)…they’ve done very well. I do remember Robert at H loving the Gibbons, and he was such a source first guy…

Chris you beat me to it. I was going to say the Seattle/Greenlake area.

I am running rear ported Devore O/96 on front of a large window wall - one of the best sounding rooms I have had and much better than many square or solid wall rooms.

The window wall is reflective for high frequencies - that is not as much a problem as tweeter highs are a lot more directional so not as much reflection from behind the speaker. Make sure the wall behind you is diffusive and not reflective!

Windows/glass transmit/leak low frequencies - this means there is almost no chance for room resonances or standing waves below 100Hz avoiding the need for bass traps - the windows take care of that. I have some of the cleanest measured bass in this room. My asymmetric room and slight asymmetric placement (as what John does at shows) helps avoid resonances even more.

It does depend on the Devores you run - the O/96 and 93 have a lot of bass - tightening that is not bad. The Super 8 and Nines are leaner and the bass absorption together with high reflection can be a problem making the speakers even leaner. The O/96 do need another 18-24 inches from the wall though - luckily they are not deep! 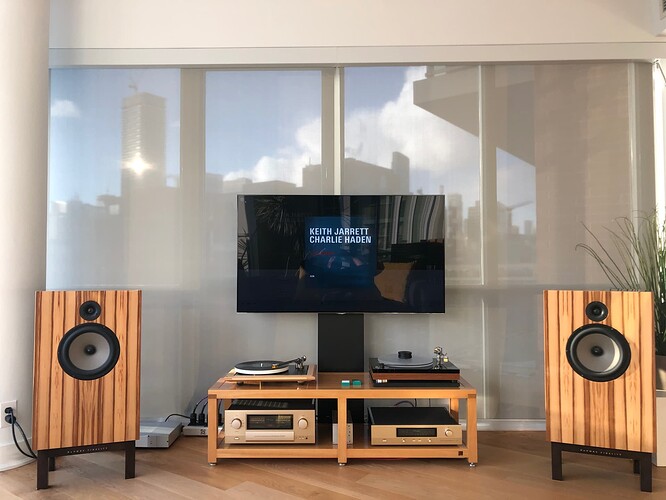 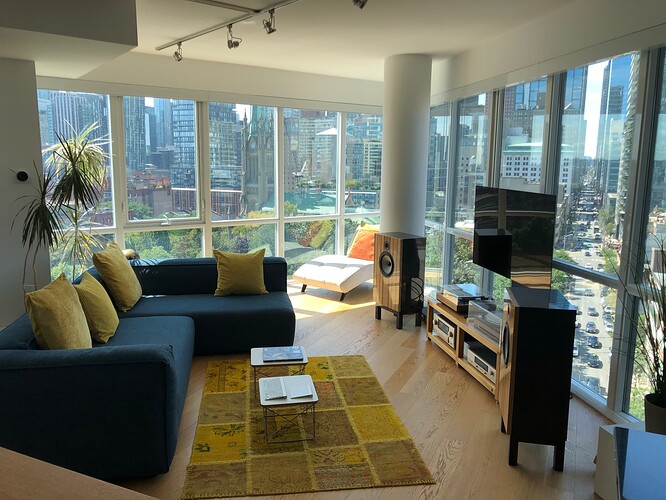 If the distance from the port to the boundary (glass) is the diameter of the port (rule of thumb) or more, the port location becomes irrelevant.

Others have commented enough on general issues of having a speaker in front of so much glass.

I’m a country person, but a view like that could easily persuade me to change. Fantastic apartment in a great city.

My rear ported Emit M10s are on wall brackets against the wall. I’ve tried both bunged and unbunged ports. They sound perfect unbunged. I think as long as the speakers are further away from the wall than the diameter of the port then the ports should perform fine. Of course bigger speakers may perform differently.

Several facts to consider for you:

My own situation is somewhat similar to yours, but my speaker set up is at a much bigger distance from front wall (glass) to favour both points above ( 1.6 metres distance) Also my rear wall behind the listening position is quite heavily treated for 1st reflections and reverb throughout the frequency range: 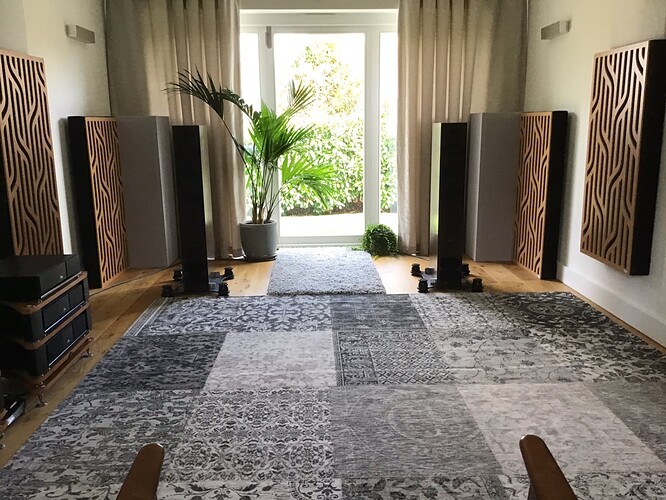 I managed to ‘hide’ frequency tuned membrane absorbers behind the curtains. Good luck with it

PS. Allow me to add that unequal speaker distance to side walls and glass exposed to 1st reflections should be avoided as far as at all possible. 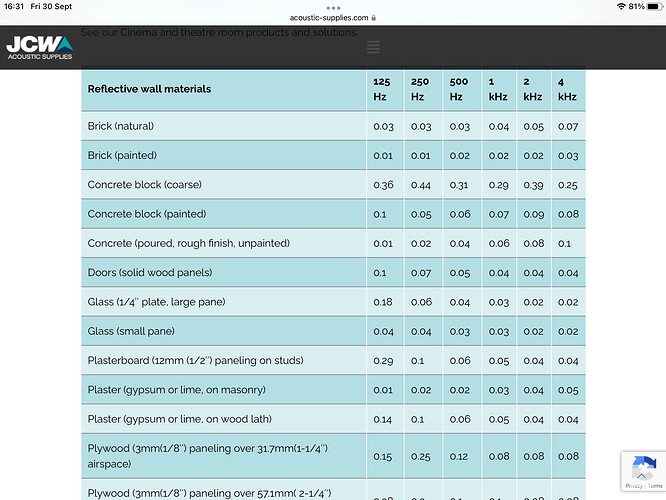