what could I do? I was also considering the idea of ​​cutting the Aria and buying a stageline S (the head is Ania).

any suggestions are welcome …

Is it sited too close to a transformer or digital source?

Any noise when no phono leads connected? 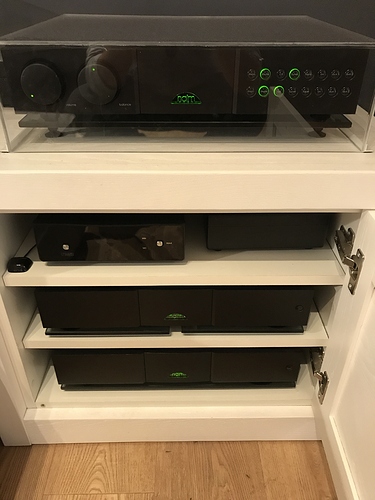 That looks worryingly close to some serious transformers for an MC stage. I would pull it out from where it is and position it as far away from the Supercap and amp as possible. If the noise is reduced or disappears you’ve found the problem. If not, back to the drawing board…,

Are there any concerns over thermals/heat dissipation here as well?
Everything seems to be quite enclosed as well as the fact sensitive items are far to close to each other of course as already pointed out.

No worries, just an observation!
Moving the phono stage away from the other equipment should help anyway, all the best.

small update … I moved the phono stage away as much as I could from the transformers (the maximum that allowed the length of the cables) … the noise decreased … then I set the gain to 63db instead of 69db (as suggested in the manual of the phono stage in these cases) … the noise has further decreased … unfortunately, however, at 10 o’clock you can still hear it … definitely not as before but there is … I think I can’t do anything else. … or I accept his presence or I test with a Stegeline (at the moment I cannot face higher expenses) … does it make sense to take a Stageline S ?? maybe more in the powered by a hicap? doing so then I would also be ready to switch to a Superline …

The MC Stageline is also sensitive, the Superline, especially so. It comes with the territory with most MC stages and slugging them always comes with a performance price.

One possibility might be to try to get hold of some mu-metal sheet and shielding the phono stage by putting it on the shelf above and below. That may help.

It comes with the territory with most MC stages and slugging them always comes with a performance price.

If anything, the Naim ones are more susceptible on this than average. I had a Stageline S once that had radio better reception than most tuners. You could hear the DNA linking it to the NAT01.

I too had hum issues with a Rega Aria (using an LP12 with Krystal cartridge into 202/200). Even when placed as far away as the interconnect would allow I still had audible hum, so ultimately gave up (though, tbh, the hum was not audible when the music was playing). Ultimately went with a Trichord Dino Mk. 3 with separate PSU and despite being placed much closer to the amps (including Naim’s NAPSC) I have zero hum issues. So this worked better for me, in my setup.