Removing lid on Naim Nait 5i-2

I have tried removing the lid with little success. After taking out the bolts, the lid pulls up but seems fixed inside towards the front of the amp. Anyone know how, without damaging it.

Yes, there’s a front hex bolt accessible via a small hole. Be careful as easily damaged.
@Richard.Dane will advise more accurately im sure.

Yes, the lid is bolted onto a cast flange coming off the fascia. You need to be careful here. The socket type changed at some point (@NeilS can advise here on which was used with the NAIT 5i italic). Be very careful as the zinc magnesium alloy is quite soft and it’s easy to break or punch a dimple if you overtighten. It does the beg the question, why are you trying to remove the cover?

No need to remove the cover - taken from the tinternet 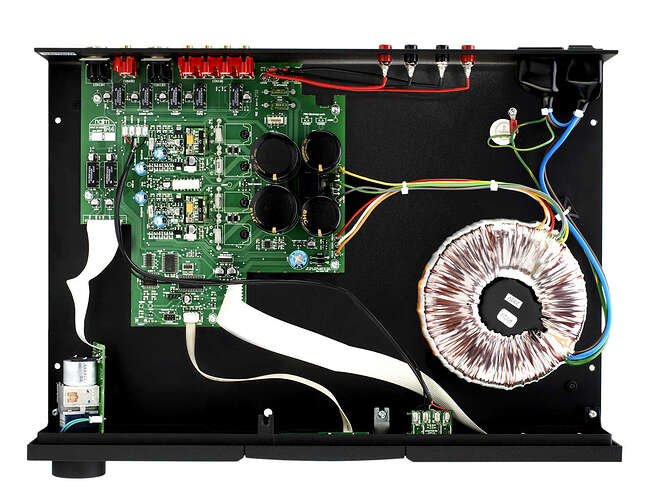 They were originally no.1 Pozi drive & changed to T10 Torx.
I can’t recall when the change was, but if the screws between the RCA sockets are Torx then the one inside will definitely be the same, as the machine thread screws were changed first.

Can I possibly ask what sort of reasons might you change a screw head? Is it just down to screw availability, or some other engineering reason?

I can’t vouch for Naim’s reasoning for changing them, but they have a far better interface between the screw & the driver, meaning that they are less susceptible to cam-out.

Good to know, many thanks

Thanks all. very helpful.

On a slightly different subject can i ask NeilS if it’s a tricky job to replace the laser mechanism in a cd5i-2. Wondered if there was any soldering involved & maybe where to get hold of one.

Back to the subject in hand, my reasoning for asking about removing the lid was, the logo has gone quite dim (on the cd too) but when i owned a cd3.5, same issue with the logo, but when i removed the lid & pressed slightly with the end of a screw driver against where the logo attaches, it lit back up & wondered if it could work with these. Probably not but thought it may worth a go.

The laser is of more importance really because i do get error sometimes when playing certain discs & is probably on it’s way out.

The most likely cause of the crescent style logo dimming is due to the “bleed” issue. Replacement is really the only fix for that.
Re: the CD5i, I can’t really help too much without breaking forum rules, but yes - soldering is required. And an oscilloscope!

Looks like a service then when the time comes.

The laser is of more importance really because i do get error sometimes when playing certain discs & is probably on it’s way out.

Do they play in other players? Car, a friend’s, etc?

My CD5i.2 went to Salisbury to have its mech replaced late last year and the logo was replaced at the same time (even though I hadn’t noticed an issue with it) along with some caps.

Since your amp is probably reaching an age where it needs a recap why not send both amp and CD player to Naim and let them sort everything?