I’ve just heard the terribly sad news that Koady Chaisson, banjo player and guitarist with the East Pointers, from Prince Edward Island, has passed away aged 37.

We had the pleasure of hosting the band in November. Koady was a superb musician and an absolutely delightful man. We see a lot of big stars dying, but when it’s someone you’ve met and had dinner with it’s just awful.

Rest in peace Koady. (He’s the one in the centre of the photo, which I took at the concert in Chidham Village Hall on 26 November). 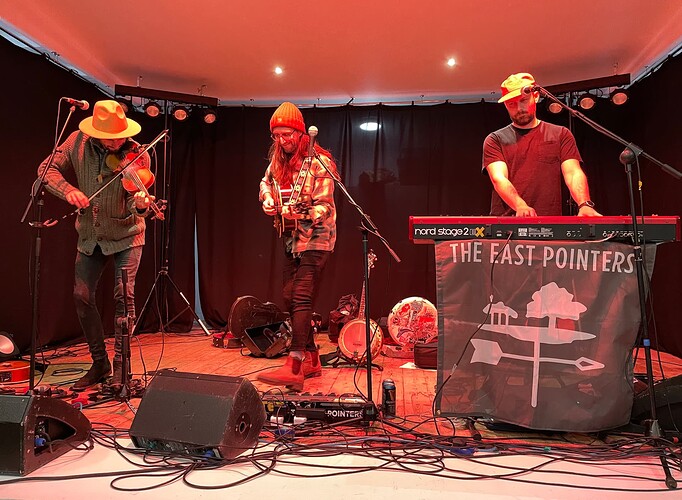 That’s devastating news! Such a nice bunch of guys. We last saw them live in 2018 and hoped to visit Prince Edward Island off the back of their UK tour. COVID prevented us from doing so, but we still hope to get there one day. After the gig, the band spent a considerable amount of time meeting fans and signing autographs, and were incredibly approachable and down to earth. I play at least one of their albums every month as the music is so uplifting. RIP Koady!

As you say, they are lovely people. We had a pre-show curry with them, all sitting chatting round a big table, and introducing them to the joys of Langham Brewery ales. I just can’t believe he’s gone, as I only met him six weeks ago and we were joking about how his name is the same as our sound tech’s dog’s!

Difficult to get your mind around any death at such a young age……and in your wemfest role, must be hard……so sorry😥

Mark, the founder of WemsFest and the other director, is round for dinner tonight so we will raise a glass or six. Koady’s brother is also in the band and he must be devasted, along with his family, friends and fans everywhere.

Sorry to read this Nigel. It just sucks. Difficult times.