Just a basic question for you Roon users. Will it work seamlessly with a Uniti Core and Atom? I currently use the Core to stream locally to my Atom (as well as using Tidal, and Internet Radio) with the Naim app without any problems. Consequently, I have music files in both the Music folder and the Downloads folder on the Core. Could I continue to rip/download files as I do now, and then get all the extra metadata on top via Roon, but go back to the Naim app (sans extra metadata) if I decided to ditch Roon?

Also, I find that when I use a third party streamer like BlueNode 3, it can see the Downloads files metadata (such as it is) on the Core, and can see the files in the Music folder, but can’t get any of the associated metadata or artwork. The Core seems to treat the Music folder as proprietary in some way. I would like to be able to access the Core from different streamers, and get at all the metadata (and more). Any answers would be much appreciated.

I was at a recent Dynaudio demo day, playing both their new active speakers, and their top end via an ND555. They specifically used Roon as their source. There was certainly no hit in SQ.

It might be better to start a new thread about this as people with a Naim uniti core and Roon may not necessarily be logging into this old thread very frequently.

I seem to remember that the unity core uses a bespoke tagging format and rips to WAV if I remember correctly, there is an option to convert the files to flac files which I think roon then would probably be able to see, but as I say a new thread might be the best way forward, If you don’t get any replies here as I’m pretty sure this has come up before.

I took your advice and started a new thread. (The Uniti Core rips to FLAC, (or WAV if you prefer) so that should not present a problem.)

They presumably used a non-Roon source as well, or how would you make the comparison?

I was using RAAT from the Mac to the ND5XS2. I had volume fixed and no DSP. I already cancelled my Roon and I didn’t take a screen shot. But I do remember only seeing three steps: Qobuz FLAC to RAAT to ND5XS2. I wasn’t streaming Roon to any other device.

This is what I get. I am running a Roon server on an Intel NUC with Roon ROCK. 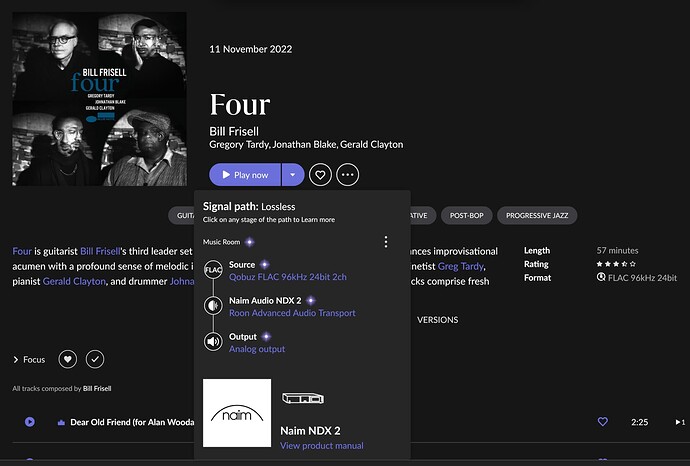 Have a look at this discussion:

Thanks David and @Pete_the_painter. I’ve downloaded Metadatics and have managed renaming tracks (to remove track numbers) easy enough. After a few fails, I’ve managed to correct the track order on the problem file - I had to use the Music Brain lock up feature to rename all the files and this worked. Anyway, I’m really pleased with this, as I can comfortably move away from Room now and be able to fix the random metadata issues that crop up with downloads. So thank again to you both for the help…

Ah, that’s what I saw. Thanks for sharing. My memory did not serve me well on that one.

All I can say is my Fiio M11 Plus works and sounds phenomenal with Roon and is now my most used audio device hardly touch the Atom or others and it’s replaced all my dedicated headphone setups. Love it.

my Fiio M11 Plus works and sounds phenomenal with Roon and is now my most used audio device hardly touch the Atom or others and it’s replaced all my dedicated headphone setups.

Are you saying that with headphones this £600 device sounds better than the Naim Atom? (Is that the Atom HE?)

I dont have a HE but to me I am enjoying far more than my Atom via speakers and all of my other headphone dac/amp setups which cost more. Its a little marvel. It just became Roon Ready so for me its perfect. I dont need multiple headphone setups any more just the one as it can move about from room to room with me, takes up no space and has enough juice to power most headphones I would be using and sounds superb with them.

You cant run Roon core on android nor would a DAP have the grunt to do it if it could. The M11 Plus is a full Roon Ready endpoint. I have been a user for 5 years and it doesnt sound any different to any other streaming protocol on any system I have had or still have including my Naim.

I run Roon server on a Intel NUC running Roon ROCK. That’s your best option for highest quality. You essentially have a hardware appliance dedicated to the Roon server and nothing else, and the OS is optimized for running the Roon server. The whole thing sits under a record cabinet, connected to an ethernet network switch.

I built mine for about $700 with an Intel i9, 16GBs RAM, a 256 Gb SSD for the OS and database, and 1 TB SSD for audio files (ripped CDs and hi-res FLAC). You can spend four times as much and get Roon’s Nucleus+ appliance. It’s ready to go, but that’s a lot to pay for not building your own (which isn’t hard).

The Roon controller runs separately on my M1 iPad Pro 12.9 (it doesn’t actually need that much horsepower, but I use the iPad for other stuff too).

Thanks! I did quit the Finder, etc to decrease the Mac mini’s impact on the performance of Roon Core. Seems the NUC should reduce all that background computer noise. And I have classic spinning HD. All kinds of nasties.