Roon - tidying up the display

Trialing Roon at the moment. One of my issues is the display just has too much junk on it

Is there anyway to stop it showing Lyrics as a search tag? any way to turn off images search? Anyway to turn off ‘Featured Artist’? There is just so much on there

I struggled with that as well, it also combined and double some of my library making it difficult (me anyway) to navigate it without me losing any more hair. I gave up and deleted it all. I still get emails asking me to rejoin but I can’t be bothered.

Just spent another hour on it and I’ve come away with much the same conclusion. At the moment I’m thinking I’ll wait for the warning email that the trial is about to end and then probably cancel it.

I also don’t really see why I have to pay someone to manage my music. I still struggle with the whole concept. But that’s me, I’m sure others will respond completely different and swear it’s the best thing since sliced bread. Different folks different strokes.

I never discovered so much new music in such a short time, not enough hours in the days of my trial. It integrates my own Flac stock and Qobuz very nicely including the cover art. The interface on PC , Android and Ipad Pro is generally a joy . I greatly value the credits tab to learn who plays what. My experience is heavily biased by listening to ECM records , however. The pdfs are beautifully scanned , too . The reviews are of variable quality and tend to be by very few authors probably organised by genre. The language of the reviews seems repetitive and it seems particular investment went into the ECM portfolio. Manfred Eicher deserves a monument.

I am on course for lifetime subscription but wonder if there are reasons why I should not. I do not generally approve of Silicon value machinery which often extracts value from others’ creative work but often adds little original value or reward for the creators. .

What I like about Roon is how it is able to manage classical music. It’s not perfect, but pretty close.

Organising classical music by : composition, movement, etc. and being able to identify the many interpretations of that same composition is a nightmare with most music library managers (if not impossible! I tried that with JRiver… not cool…).

Paying $499 (lifetime) for such a nice library management is pretty “cheap”. 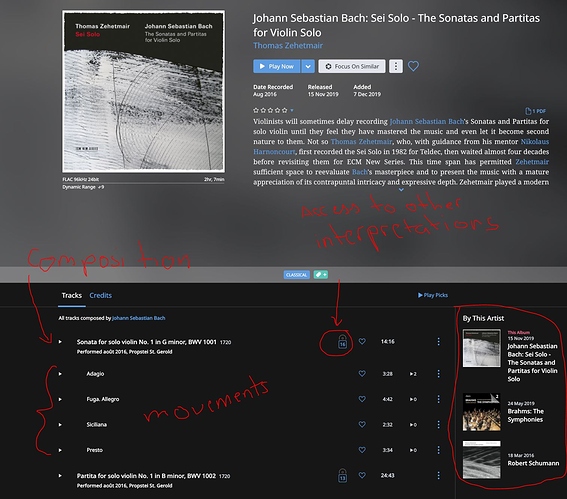 I’m sure it works but to be honest after trailing it I wasn’t overly impressed, I don’t stream from 3rd party services just my local files. However what it did do was include my old iTunes library (used only for my cars), my files where I store my hi res files and my backup(s). It was just total chaos and extremely frustrating. Also I’m generally working in the studio while I’m listening so all the extra info is not really what interests me. As for new music apart from the obvious sources there’s a wonderful thread called WAYLTAY that keeps me informed and my bank account empty.

I was very sceptical at the start, but have definitely grown to like it, after 2 trials. It reminds me of music I own while
Integrating very nicely with Tidal and Qobuz.

However what it did do was include my old iTunes library (used only for my cars), my files where I store my hi res files and my backup(s). It was just total chaos and extremely frustrating.

I understand that. It happened to me too. The reason was pretty : wrong basic tagging. Roon was unable to identify the albums, or did it wrongly.

are wrong then the “guessing” process goes wrong too.

Room works great for me👍
I just went through the options enabling or disabling as appropriate. The search works fine and it finds anything I want really; searching Qobuz and Tidal at the same time rathe than two separate searches in different Apps.

Duplicates and album grouping is easy to do if say you have a Hires version as well as a CD rip and they are showing as separate albums. Only ever come across this occasionally.

All albums are in the same place with no “do I look at Tidal or Qobuz”?

I use to, but I have now ~3400 classical “albums”.
Managing every composition with precision is a full time job

Think you’re right re classical music. I don’t have a huge collection of classical albums but I do know it’s damn hard to find the one you’re after sometimes.

I found Roon didn’t manage with my (poor) metadata very well, not recognising a good chunk of my collection. And much of what some people see as “added value” I felt was junk: the most useful thing any software could do is show the original album artwork, but that seemed to be the one thing it couldn’t show (not that the library and rendering software I use, Audirvana, can do that either).

The first time I trialled it I hated it, for the annoying “social media”-like way it kept propting me to inform friends what I was listening to, and also its appearance was reminiscent of SM. However some time later when other people said it no longer did that I had another trial - indeed improved, so I no longer hated it, but it didn’t bring anything of added value for me - certainly nothing to justify its steep cost. (It still had some hateful things, the worst of which was “Roon Radio” that suddenly started playing a random track after the end of an album, when I was just reorienting my mind from the moving music I’d just been listening to. However, I was advised (through this forum) that that annoyance, enabled by default, was called Toon Radio and could be turned off. I did, and found I could turn off other irritations, so the interface was OK - but that was it: and still not finding all my music.

Of significance to others, I don’t stream online from any subscription service like Tidal, where I think it comes into its own more, and also I am not interested in having pop-ups telling me things about the musicians or their other work or connections: I can find such things in other ways if I want.

I’ve not seen any Social Media style messages nor any pop ups of any sort. Roon Radio can be disabled although I use it sometimes for new music suggestions - the algorithm it uses is based on what you have just listened to and works well in my limited experience.

the display just has too much junk on it

I certainly agree with you on this, it’s cluttered up with loads of stuff. I think a lot of it could be put in dropdown lists so that they are available should you need them. There are some really dumb things, like “Added by Chris” next to every single track in the queue, including tracks that were added by Roon, not me.

What I would say, though, is that the last thing I want to do when listening to music is stare at a computer screen. I find that using an iPad or iPhone for control gives a progressively simpler layout as the screen size is reduced, so maybe this would be a better way to control it for you?

Overall, I think Roon does what it does very well, and I find it very stable and reliable. It will never be perfect for everyone, but I still think it’s pretty good package overall.

As I said, the repeated “tell your friends” pop-up had disappeared by the time I trialled a second time, though the cluttered interface to my mind was still somewhat reminiscent of the abominable Facebook. As for Roon Radio, it might pick something it thinks I would like - but it has no idea of my mood when a piece of music ends. And to me much music needs is contextual, and I like to hear in its place as part of an album, not randomly played on its own. But again, once i learnt what it was and that it could be disabled it wasn’t a problem: though it would have been better off by defaulty.

I just use Roon Radio when I want to listen to something in the same vein and it’s been successful with some of its suggestions providing a new album to listen to.
Mostly its off though as my listening genre may change wildly from album to album.