Running An Ethernet Cable Between Rooms

I’m thinking of adding a Naim streamer to my main system which is in a different room to my router and would ideally like to hard-wire with an Ethernet cable rather than use WiFi. The rooms are adjacent but have solid floors so there isn’t the option to run an Ethernet cable under floorboards. The two options that spring to mind are to run a cable under the carpet in the room where I have my router and then through the internal wall into the next room, or secondly to run a cable from my router to the outside of the house and along the external wall and back into the other room where the main system is housed.

I would be interested if anyone else has used either of these methods when connecting a streamer and any advice on what cable to use would be helpful. I would need a cable run of about 8 metres in length and if going the internal route under the carpet then this would be passing around a fireplace hearth.

Would it suffice to use a “standard” Ethernet cable unterminated to have a neat job going through the internal wall and then terminate the ends after feeding the cable through, or better to use a pre-terminated “audiophile” cable passing through a brush plate or something similar (I have no idea what’s available for this sort of thing).

The guy who installed our alarm system ran an ethernet cable from one end of the house to the other side, running around the exterior of the house. He had a sort of crimping tool to fit the connectors, so it can be done.

Any hole needs to be relatively big, eg 8mm drill bit is plenty for a decent utp cable but you won’t get the plugs going through that.

The crimping tools, at least the decent ones, are fairly pricey. It’s far easier to terminate in a wall face plate and then use bought Ethernet cables.

This is one of mine; the cable comes down from the ceiling hidden in profiled conduit, through a hole I drilled and to the back of that face plate. Depends on your wall construction, this was plasterboard over timber and I had to discover where the timber was. 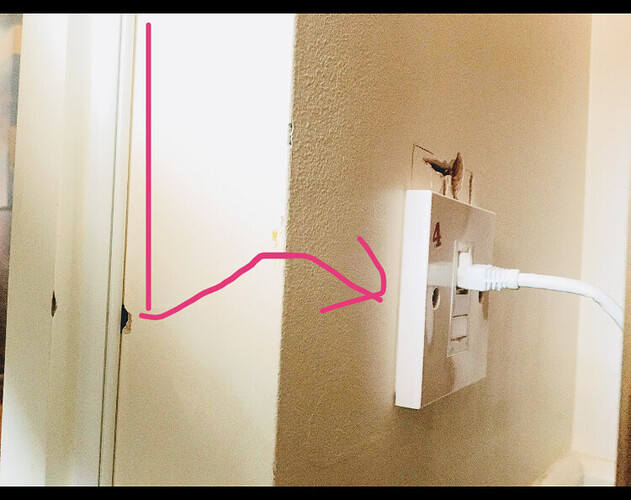 I was faced with a similar situation to you as my router is in my office and my listening room is on the opposite side of the house with a hallway in between with fitted carpet throughout. Like you I did not want to use wifi and wanted a hard wired solution. My cable run is about 15 metres from memory so I bought some Cat6a from Designacable which I ran around the edges of the rooms between the skirting boards and the gripper rods for the carpets passing under the metal door strips between the rooms so as to avoid making holes in the walls. Once the carpet was firmed back down the cable is undetectable. This is a job you only want to do once ideally!
This is a very open topic and I expect you will receive lots of replies on how people have done this and whether to use expensive cables etc… it is a can of worms. I opted for a well regarded fairly inexpensive cable and it works for me. Let us know how you get on.

Thanks guys so far. Should just also mention that the room with the main system in has a wooden floor over a solid base, no carpet in there.

I have run Ethernet cable externally to my streamer…you need external Ethernet cable and then the ends need terminating appropriately. Running internal will be easier I suspect

Can you go upwards and then down again?
Or go around the skirting board neatly?

…Like you I did not want to use wifi and wanted a hard wired solution. My cable run is about 15 metres from memory so I bought some Cat6a from Designacable which I ran around the edges of the rooms between the skirting boards and the gripper rods for the carpets passing under the metal door strips between the rooms so as to avoid making holes in the walls. Once the carpet was firmed back down the cable is undetectable. This is a job you only want to do once ideally!
…

In many ways we could almost consider this akin to running wired telephone extension cables of yesteryear, perfectly feasible without drilling walls if you can hide the cable undernaeth carpet etc or don’t mind nailing sympathetically coloured cable to skirting board etc.

A few years ago we had some work done and I had ethernet sockets installed in every room, but made the mistake of only installing 2 sockets in alcoves at one end (either side of a hearth where a TV/multimedia box might have gone) of a knocked through room. Currently typing on a Mac Mini on teh opposite end of that room working via wi-fi - it works well but I’d far prefer a wired solution for large file transfers across the network - could probably easily though untidily lay a 10m ethernet cable from a switch on the other side but have no carpet so would need those nailes clips to attach to the skirting and under the lip of a step down to the kitchen.

Mini D line trunking is what you need. Though the junctions in corners can be fiddly.

This kind of thing; 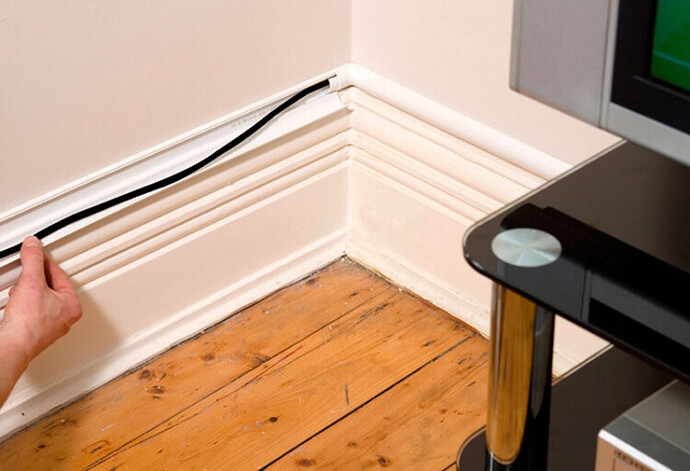 First option - well, anything is possible but this would involve a lot of work.
Second option - the route will have to circumnavigate a fireplace so not as easy as running along the skirting boards of a straight wall.

I have heard of external Ethernet cable that is more resistant to the elements. Is yours run through any form of trunking?

Running outside is certainly feasible, you might consider using trunking to protect the cable from the elements.

I’m lucky we are in a bungalow so single storey. I pulled Ethernet cable through existing vertical runs where coax tv aerial cable went and also surface mounted using D line trunking mentioned above. Crawling around in the loft space wasn’t fun. Currently there are 6 wall plate sockets in different rooms that all terminate in the same up in the loft. There’s a 16 way switch that keeps everything connected to the router.

…
Second option - the route will have to circumnavigate a fireplace so not as easy as running along the skirting boards of a straight wall.

When I get my system back in the front room I would love to have the equipment away from the speakers but these blinking firplaces/hearths would be in the way! Once had a long powered HDMI cable running from the AV amp at one end to a projector across the hearth at the other end but in those days I didn’t have a log burner in the hearth and had some carpet I could hide cables with o some extent.

No it’s clipped to the brickwork…out of reach or potential damage. I actually had to go from one side of the house to the other (also have solid floors)…went up and through loft space then down other side of house.

I had an engineer do mine for me. Faceplate in study with cat 6 running along top of skirting to outside wall then through wall, round outside of house and back in to lounge to another faceplate. He used external cable ie it was sun/rain proof and also tested to full 1Gb. Cost £150. Mini switches at either end to provide connectivity to multiple devices eg tv, hifi, sky, sound bar in lounge and nas (x 2) computers printers etc in study. No boutique cables used - sounds very good to my ears.

The AV chap who did my network/aerial/satellite distribution for 8 areas was an utter star and extremely cheap too compared to the costs the builder charged for tidying things up afterwards.

Many imperfections with the building work to my view, perhaps I’m too fussy, but I fell out with the builder and he never came back. Several things unfinished.

In many ways we could almost consider this akin to running wired telephone extension cables of yesteryear, perfectly feasible without drilling walls if you can hide the cable undernaeth carpet etc or don’t mind nailing sympathetically coloured cable to skirting board etc.

I also use flat Ethernet cabling, designed to put along the floor under carpet/underlay.

Funny perhaps that many of us are happy to re-wire mains plugs or otherwise fiddle with mains sockets but ethernet is considered a bit techy! The former is the dangerous one naturally.

Quite… I thing perhaps it’s because the plugs are a bit fiddly, and you need a specific crimping tool… but no more demanding than successfully soldering up speaker cables or interconnects really.

I have a friend who is competent in making up the connections and has the crimping tool to do the job. I’m not sure about the cable checker though.

Does it matter if the cable is Cat5 or 6 or 7 or whatever the latest spec is?

He has suggested the use of faceplates rather than running a cable direct from the router to the streamer. Are there any advantages/disadvantages to this method?