Well about a month ago, i took my russ Andrews 6 way multi blook apart, as wanted to see if i could mount into the stud wall, rather than sit on the floor. This would bring a nice benefit, as the cables would be better dressed, plus the block would be off the floor.
Anyway i managed to do this, and while at it, i removed the inline power silencer, or what ever it is from inside it, so now it was just 6 plugs, but i also noticed that the plugs are just wired in and out off each, as they go down the line, not liking that much, i decided to sort it.
Well today was the day, i removed all the existing cables and started again, only this time, using better quality cable and running each plug separately from the incoming 10mm, so now the live, natural and earth, are soldered using silver solder, and each one is separate.
The reason behind all this, is i was rather underwhelmed by the standard quality, plus as i said, i wanted it in the wall, i also can now plug all my gear in, what ever socket works best for dressing, rather than have say pre first and power supply last, as now each is exactly the same, so i can dress them better, better quality cable used now, better wiring lay out.

Results, well to start off my 552dr power supply is not humming like it was, now that could be a coincidence or not, time will tell, as for sound, well being honest so far, i wouldn’t get excited lol, but the system was off for almost 3 hours, and only been back on for an hour, but it all still works and sounds fabulous, but hopefully i might get some extra detail come through, once warmed back up, as its got to be slightly quieter now than before. But if the 552 is now quite, that in itself will make it all worth while.

But for anyone also using a Russ Andrews power block, you might want to look inside it, and get it re wired, especially the earth if nothing else

I used to use a power block. Then went over to double sockets fitted in trunking as this was much neater. 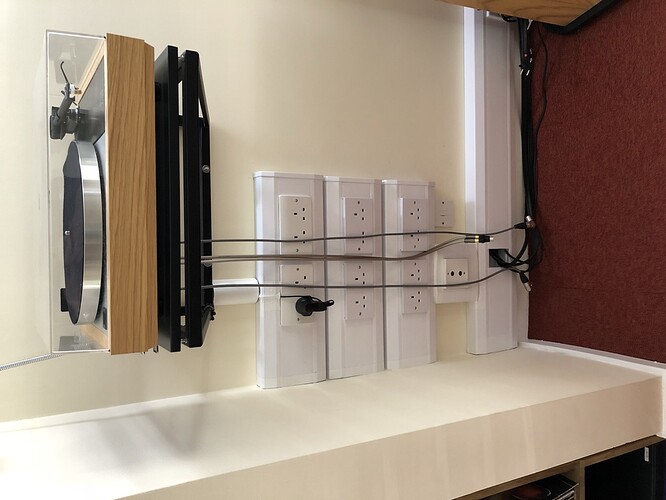 This worked well until I got too many boxes, now I had it re-wired with three new radial circuits from a new consumer unit. 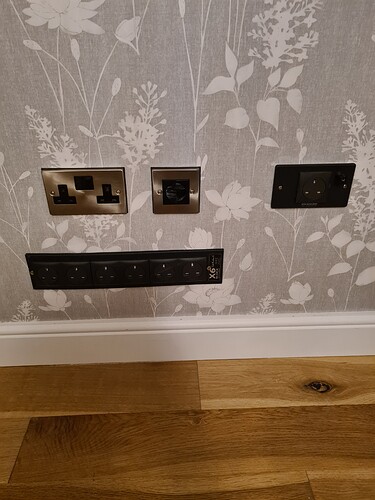 I have an olsen hospital grade 8 way pdu and am gonna do the exact same thing as you but using the earth radially as i just dont know how to reassemble the live and neutral wires to seperate points. I’ll also be using a furutec ncf iec and hopefully this should increase SQ to all the 8 points. Most of these pdu use low grade copper and nothing special for the earth so there should be room for improvement esp with quite backgrounds and less noise/hum.

I’m impressed by the way you get those horizontal wires lying nice and straight, rather than hanging down in a loop.

Thanks. Took ages to do…

Can’t seem to work out how to get uploaded photos in the correct orientation. Some are correct, some aren’t when I post. Any help greatly accepted… 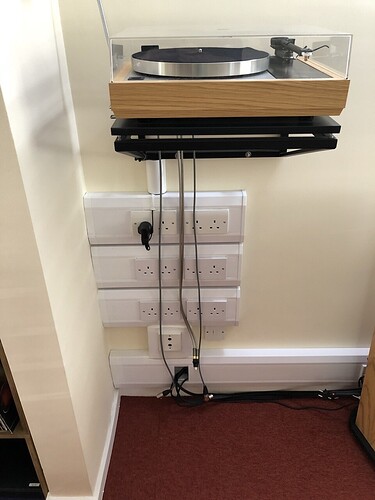 Please let me know hue you did it, thanks

I’m guessing that you use iOS. Do a google search for iOS camera image orientation. I just rotated your picture in the Android photo viewer and uploaded it again.

This is current Signature Power Block 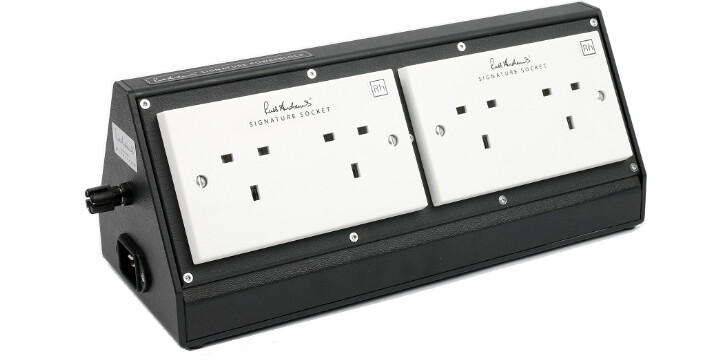 I have been inside (I had to replace one of the double sockets) and the internal wiring of these blocks is good quality and the construction was solid.

Try putting this in the wall!!

I’m more impressed by how well the cartridge on that LP12 must track.

I used to use a power block. Then went over to double sockets fitted in trunking as this was much neater.

That does look nice and neat. I must say, though, that in my experience effective cable dressing is often very different from neat cable dressing. Keeping the very sensitive line level signals in those interconnects well away from mains cables is key, and I’m not sure if you’ll achieve that with those high wall sockets.
Possibly worse is that wall wart power supply in the highest socket. That’s almost certainly going to be radiating some nasty interference, and it’s quite close to the interconnect from your turntable, which, once connected, will also be hanging in a loop very close to a number of 240V AC and other cables.
It’s generally best to keep non-hifi and SMPS stuff away from dedicated hifi mains supplies and put them on a nearby (but not too near) regular domestic circuit.

Apologies for raining on your parade, but I find these things do make a significant difference to performance.

The plug-transformers (3No.) are in the top row. The standard plugs are in the bottom two rows.

Each row is on its on separate radial circuit, (3No. in total), so there is some form of isolation.

As with anything, it is a compromise to get the best with what you have.

Sure, we always have to work out the best compromise. Still, I wouldn’t be happy about having a plugtop power supply that close to a turntable and preamp, less still 3 of them.

If you want to see what sort of level of RFI they are churning out, try this:
Get a little portable radio, maybe one with SW or MW. Turn it on, and tune it so that no station is audible, just a bit of background hiss.
Then put the aerial near the SMPS (or any other live electrical appliance or cable). What can you hear now? That will give you a good idea of the electrical environment in which your source signals are operating.

Thanks for the info.

The wall warts are now on an extension lead on the carpet which is fed by a socket on the original house wiring.

They are now some distance from the source components as well.

Well the power supply is still quite, so thats a big bonus and it was the main pain i had with it all, and part off the reason i went looking elsewhere.
Sound wise, its sounding great, not going to say its changed, but its certainly quite lol.
So happy i re wired it now, its been well worth the 2 hours it took.

Or maybe buy something good from a company who specializes in power AudioQuest, Shunyata, PS Audio. Just my opinion, I could be wrong.