just looking to tidy up my cabling and would like to upgrade my power strip. I have checked other posts and I see that the Wireworld Matrix 2 is recommended but I see no comparison/comments on the Russ Andrews Powerbar S . I have a double wall socket (unswitched) with two cheepo unswitched power strips from IKEA (no neon etc). One is used for my tv, NUC running Roon core and my Rega p8 power supply. The other I use for my Aria, SN2 and ND5SX2. It is this one I want to change. I only need 3 or 4 sockets so the Powerbar 4 socket is a bit cheaper than the Matrix. Do any of you have any recommendations between the two at this price point (~£120) or are there any others I should consider? Also, is the RA Yello mains lead any good for connecting the strip to the wall?

I have the RA Powerbar S and Yello cable for the Atom, Arcam AV amp and my LPSU for Roon core. Works well and was uplift over the cheap one before. Can’t compare to WW as never tried one.

Either would be an upgrade over el cheapo blocks.
I spent some time looking around at this price point for others, all had some additional filtering/conditioning or protection (probably from a cheap component that would hinder performance).
I chose the RA 4 outlet one for my av setup. Emmerdale has never looked and sounded better.

I needed an extra couple of outlets on my dedicated lines (I have two) in order to use some AC iPurifiers, but just couldn’t bring myself to pull the trigger on what some of these ‘audiophile’ power strips cost, and also wanted to retain that Naim signature sound. So I did a rummage in the spare bin, and decided to mod a Wiremold L10320 I’ve had kicking around. I took an AV Options cryo’d Tibia plus (with the Wattgate plug) also being underused, cut off the iec end, replaced the Wiremold cable with it, cut the clip connectors inside, and soldered the cable directly to the internal wires of the Wiremold (finished off with twist nuts of course). Cut an old piece of leftover ipe railing, sanded it down, and attached it to the bottom, with Herbie’s db material as feet.

I played with the plug in order, and the best to me was the NAP 160 direct into the wall, and DAC V1 into the power strip with the AQ AC iPurifers before and after it (the other dedicated line is for the opticalrendu and also has an AQ Purifier in it) Sounds super detailed and clean, perhaps a bit on the lean side, but retains all that Naim PRAT and energy (not so when I recently tried a Shunyata cable on the V1). The weak point is probably the actual plug on the Wiremold - I may be able to replace the first of those if I get out the Dremel and rework the openings. Another lazy Sunday down the road perhaps… 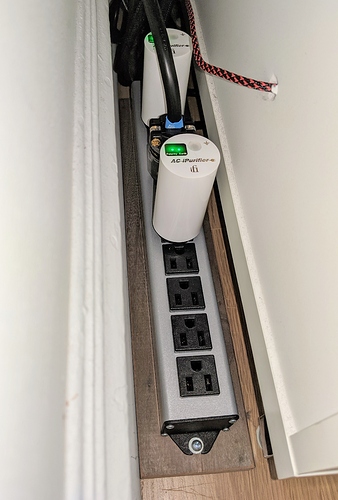 Well, I went ahead and bought the Russ Andrews. I got the 6 way in the end. It looked ok but I took it apart. It was really nothing special, with all sockets wired in series, including the ground. No star configuration. I felt the £147 for this was well over the top so it was returned for refund. I now use the Wireworld. Not sure if it makes much difference to the sound but cheaper and fits a bit better behind the rack!!!

olsen hospital grade pdu are excellent with very good build quality and very neat internal wiring. It is also double earth bonded for safety, however i’ve no idea if this casework earthing does anything for SQ. They also do a model called sound organization which is more hi-fi related while still possessing the superb build quality. I could use my AV system without one nowadays!

The AC ipurifier looks like the Furutech NCF Clearline which my dealer is pushing. I am not using any power strip to connect the components in my system as they all go direct to the wall, hence there isn’t any need for these NCF Clearlines. 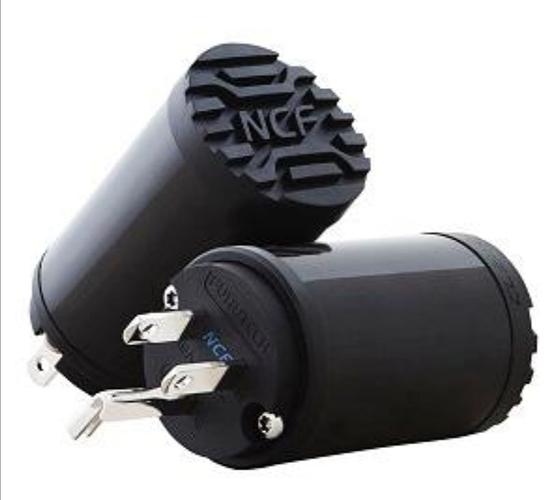 I bought a Russ Andrews PowerBlock about 15 years ago when it was considerably cheaper than it is now (and on offer). I’ve never had any complaints and even Mrs Ebor - who freely admits she had a strong financial vested interest in not perceiving any difference - voluntarily said she saw and heard distinct improvements over the cheapo strip it replaced.

Russ has built a whole business based on selling very little. Except whetting appetits. And letting you sell his stuff to yourself.
20 years ago I bought some " feet" for my Rega p25. Absolutely sapped the bass out of the machine, so they went back.

Um, I plug directly into the wall with dedicated circuits (US) and the Ac iPurifiers still made a big difference (of course you’d need to have an open outlet or use a power strip - the other dedicated circuit has the streamer PSU plugged directly and the iPurifier in the spare outlet). What I like most about them though, unlike some of these other pricier audiophile options, is the AC surge protection they give without affecting the sound quality.

I can only assume you’re using the phrase ‘selling very little’ rather figuratively, since the website contains a large variety of kit.

The company/he certainly does seem to split opinion, with very few agnostics in the middle. I find it difficult to understand how so many think he’s a reprehensible charlatan when you can return anything 60 days after purchase for a refund. I don’t know many dodgy used car salesmen who would say that and stick to it. By all means return the kit if you don’t hear a difference but don’t then claim he’s trying to pull the wool.

That said, anyone who doesn’t hear a difference and then keeps the kit out of embarrassment, confirmation bias or laziness also deserves no sympathy.

I certainly sent a few things back that I tried and didn’t hear a difference. The special 3 feet for my Rega were a clear night and day.
But I can guess there are lots that do not send stuff back. Which would suggest to RA they are happy. He is clearly doing well and running a successful business.