I have some files from SACD (DSF) which my SuperUniti or 272 cannot play natively obviously.

Both seem to work fine. 192 is the max the legacy streamers support, and 176.4 is a half multiple of the bitrate reported from the DSF file (352.8kHz).

Is there a best practice here, or is it all academic since human hearing can’t detect any difference, and I should back off to 24bit/88.2khz in a feeble attempt to keep the flacs “hi res”…

Perhaps @johnnymax could help. From what I could read from him on the CD player thread, he knows how extract files from SACD.

First time I’ve come across a problem with my legacy streamers, but reading the manuals naim only supported DSD64 and I believe my extracted files are DSD128 as reported by ffprobe (5600kbps).

Think I’ve managed to come to a conclusion after various Googles.

Whilst naim players support 192kHz playback of PCM, SACD is built on multiples of 44.1kHz.
So the “best” conversion here (and certainly what Linux tools like dsd2flac output) is 176.4kHz, so that’s what I’ve gone with.

IainO – The most important thing is that you are happy with your outcome/sound. However, I don’t know why your 272 would not read your DSF files. It certainly has that capability. Also, although I am not an engineer, I don’t think the 272’s spec with regard to PCM has anything to do with DSD, since DSD is not PCM. The “64” in “DSD64” refers to the native DSD format having 64 times the sampling rate of the Red Book CD PCM spec (albeit at 1-bit resolution vs 16). If you look at my attached photos, you will see my 272 handles DSF files. The last shot is especially telling (it is from the “Open Booklet” function in the Naim iOS app). Lastly, unless I’m missing some information or misunderstanding, converting DSD to FLAC is unnecessary for your system, which leads me to ponder whether your “native” DSD/DSF files are what you think they are. (With all due respect.) 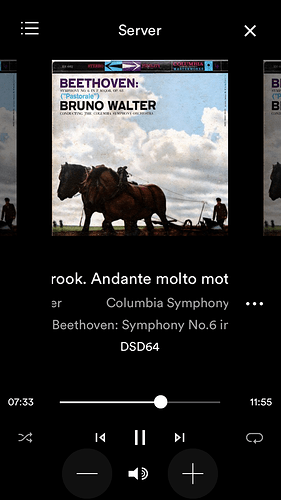 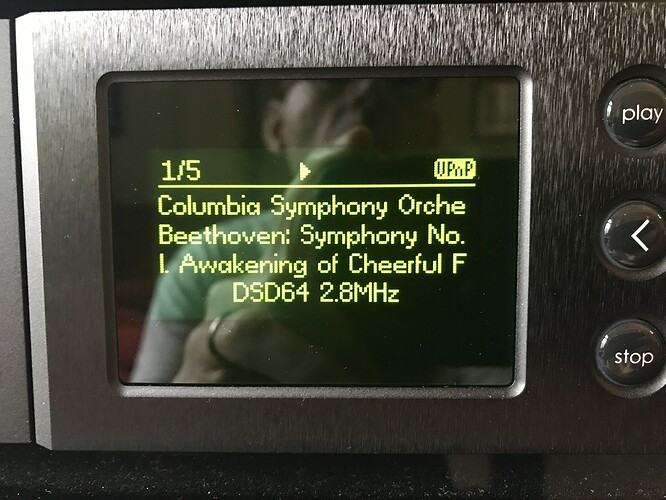 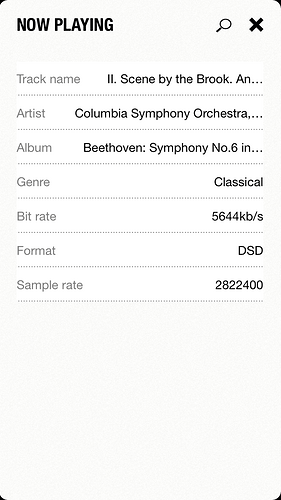 Many thanks for the screenshots, made me revisit my thought process.

So don’t you just love technology. The whole reason I started down the conversion rabbit hole was that yesterday I dropped the DSF files onto my NAS, fired up the naim app and my SuperUniti displayed “unrecognised media” or similar. Read 272 manual, saw DSD64 mentioned, and hence thought my files must be DSD128 or some other unsupported format.

Today dropped same files onto NAS and WAITED… This might be the difference from yesterday. Selected album on app, and it plays no problem! Wondering if Asset was doing something in the background and these are large files so perhaps a wait was needed.

The conversion investigation wasn’t wasted effort though. I like to have all my cloud music available to phones etc. for trips to gym and the like. Obviously for this nothing beyond a basic 16/44.1 FLAC is required so I’ll store these albums on my NAS twice, in HIRES and FLAC so all devices can play.

Thinking I need to restructure my music folders as I could then have an Asset endpoint which excluded HIRES and an endpoint which didn’t include the folder for downsampled albums. Then on every device we could pick the music source which is compatible. Saves on a Roon subscription…

I use Asset also, but I rip my SACDs directly to my NAS using a crazy (but reliable) process referenced on the “CD player in 2021” thread elsewhere on this forum.

I totally agree on a FLAC directory for music taken outside the home system. I do that too. However, unless an SACD is single-layer, you would likely just rip the Red Book layer and convert that to FLAC for the car, etc.

By the way, were your system stat readouts when playing DSD64 like my screenshots, or did you see something different? Just curious.

Android app on my phone doesn’t show anything other than DSD64 (like your first screenshot). Can’t see an open booklet function…

Has anyone used this software to convert DSD to_PCM because DSD in my opinion does not sound good enough on NAIM streamers…sounds lifeless…so I used lately AuI ConverteR 48x44 and converted all DSD i have to HD PCM and it sounds great…as a test right now I used the free option … but considering purchasing it … has anyone here tried,if so what’s the impression?

I use standard freeware linux tools running on a Ubuntu Virtual Machine on my Synology NAS to convert.

There’s an FFMPEG build for Windows at ffmpeg.org but I haven’t used it.

Do you like it?did you felt any improvement to Flac

Do you like it?did you felt any improvement to Flac

I did not. Mind you, the conversion is for streamers/DACs that can’t handle DSD. I don’t generally listen to both versions through DSD capable setups.

Naim NDX 2 has a poor DSD sound, the same file converted on the fly to PCM on roon plays a lot better, so for Naim users of streamers the conversion makes a lot of sense. DSD 64 to 24bit 172khz and DSD 128 to 24bit 354khz.

In the respect of DSD the NDX 2 is a disappointment for me. I also have two other capable DSD dac’s that play dsd much better than the NDX 2 without the softness and no life that the format has on the NDX 2. What’s the point of offering DSD and obtaining a poor result on a 6000 euro streamer that is not on the same level of an half priced dac.

When the files are converted to PCM by roon or other app, the converted PCM from DSD file on the NDX 2 plays like a champ, I think that Naim could do better than what it does with native DSD on the NDX 2.

It’s frustrating because the support for roon and DSD was one of the reasons I brought this streamer because I have a lot of albums in dsd. Other than that it plays PCM very well and has a solid roon server integration.

If you have large DSD collection,this software might help you to convert them to any bitrate PCM you want, you can test it free before you buy