We have a couple of Rapsberry Pi units in the house which have mainly been for the kids.

I got a new RPi4 4GB this week (wanted the 8GB but that will come).

I have a few microSD cards with SD adapters , virtually all Sandisk Ultras or similar.

The cards are pretty cheap these days so I perused Amazon the other day and found to my mind an odd statement from a supposed Sandisk customer services person: 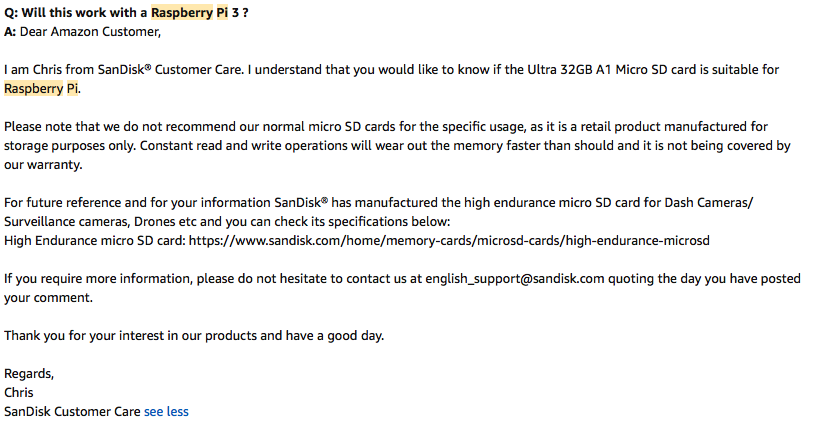 I therefore ordered a few High Endurance cards but they seem to max at 20MB/s read/write (maybe irrelevant for RPi) and wonder if this information is wrong or related to vague warranty disclaimers.

There seem in addition to read/write speeds to be specs relating to number of read/write operations per second.

I’ve seen some info on wear leveling too, but do these cards actually ‘wear out’ in normal usage or are things corrected by reformatting.

They may be cheap but they’re horrible little things!

I’ve used “basic” sandisk cards for a long time with a pair of pi both on 24/7 and I’ve never experienced a card failure.
I do have a 32gb endurance sandisk card for my dash cam but that is constantly writing/overwriting files and I suspect is a different use case from a pi just sat there running roonbridge on raspbian.

Thanks robert_h - can’t say I’ve ever had issues with any of the different Sandisk cards either.

Just can’t say I’d ever given the longevity of these cards much consideation before seeing this.

Same as SSDs, I assume.

For music storage at least, the basic ones are unlikely to be an issue as mostly it is write one, read an infinite number of times, with very little rewriting. I presume the RPi function you’re referring to is different?

Same as SSDs, I assume.

For music storage at least, the basic ones are unlikely to be an issue as mostly it is write one, read an infinite number of times, with very little rewriting. I presume the RPi function you’re referring to is different?

Yes IB, suspect like SSDs. The RPis currently boot from SD/microSD - while you’d expect the majority of files in the OS to be potentially static with few changes, updates will change/move them, and temporary system files/caches will likely change more often.

I’m just wondering if this is a ‘real usage’ concern or more theoretical with heavy re-writes/changes to various files rather than infrequent changes we might see in practice.

I know you are trying out Gentooplayer. Have a look at System Config Advanced -> Ramsystem. Run it all in ram, will remove the sd card from much use.
If you use the ram system any changes will not be saved on reboot, so go back to the Ramsystem screen to save any changes before reboot.

Thanks, good thought - it’s actually more of a general question in the sense that if we have a few Pis around the house which may be being used for more general purposes it makes it more imperative to backup the cards or store any potentially important files - not neccessarily important value wise, simply in terms of time invested in creating them.

I’ve had two SD card failures. Both of them in cameras.

The first was in a Nikon D80 SLR camera (replaced quite a few years ago). I was on holiday taking a sequence of shots in quick succession (saving as both JPEG & RAW) and didn’t notice that there was a problem until I had filled the card.

Whilst reviewing my photos a few days later, I discovered that all my photos (from that time onwards) on the card were corrupt. I attempted to use a number of file recovery utilities, but never did manage to recover the corrupt files.

I had a similar issue with a micro SD card in my mobile phone whilst on a motorbike tour around Ireland. Because of the inconvenience of opening my bike’s top box whenever I stopped to take a photo, I used my phone camera quite a bit on that trip. Virtually all of the photos on that card were corrupt and not recoverable. Luckily, I did also take some photos on my SLR so didn’t lose everything.

I certainly wouldn’t rely on SD cards for permanent backups, or for anything more permanent that storing photos in a camera until they can be backed up.

I guess I could have formatted the cards and re-used them. However, I didn’t see the point in taking a risk and so binned them straight away.

Can’t say I’ve had major issues but once or twice a few corrupt images.

I put it down to an iffy USB port but may have been the card or reader.