I have my 3 Naim boxes,ndx2,252,250dr plugged into a Chord Powerhaus situated behind my Fraim. The mains cables only need to be about 50cm long to connect to the chord block.If I shortened them would it affect the sound?

Just fold the excess cable back onto itself and secure with black insulation tape.

There just seems a lot of unnecessary cable behind there.At the moment I have coiled them and loosely cable tied them.

Naim did think about this…

Or… look at a Grahams Hydra.

I fold & wrap my Lites with Velcro tape (less sticky than insulating tape).
Shortening any Naim cable affects resale value.
I doubt very much that shortening will affect SQ, but as IanRobertM says, why risk it. 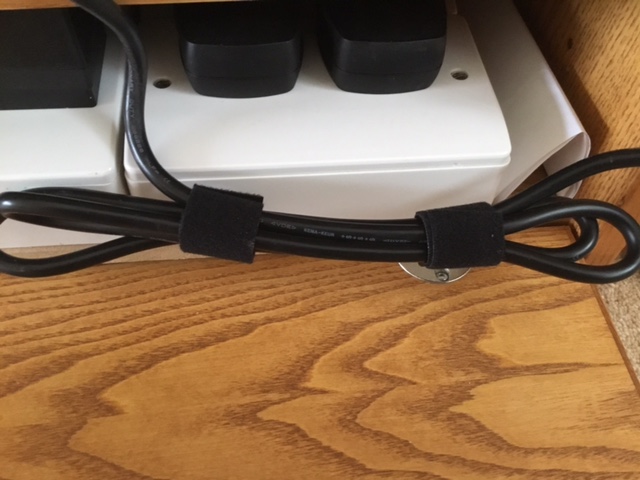 I seem to remember some reference to this many years ago here, before the days of Powerline Lites. The point was that Naim had chosen the specific length of mains lead for optimum musical performance and shortening it would lead to a degradation. Given that the Powerline Lite is but a standard mains lead with a different plug presumably the same would apply. By how much and whether you would notice it who knows - but as others have said, why risk it? Also you are butchering a perfectly good cable and rendering it in effect worthless. If necessary fold them using velcro as Mike suggested above.

It’s the case for PowerLine at least:

The Powerlines were found to be optimum at 2m length. Naim don’t mess about with stuff like this. Leave them be. That way, no regrets.

With PL Light, not so much is lost

I shortened the Powerline lite that came with my Atom because it allowed it to hang free, and it’s much neater, but I only needed to cut a little bit off. Reducing it to 50cm is a bit more drastic, although it may well have little or no effect on the sound.
Virtually all Naim cables are supplied in a fixed length, and they do make some claims about having chosen an optimum lengths although when I pressed them on this during a factoy visit I was left with the inpression that they just didn’t want the hassle of having to make and distribute different lengths. Maybe this is a job for Chord and other specialist cable suppliers.

I have often read elsewhere that the minimum length advised for a power cable is 1,5 m. I wanted at that time to buy only 1m, but finally went for 1,5 m, because of a lot of members recommending that minimal length on different forums.

I have often read elsewhere that the minimum length advised for a power cable is 1,5 m.

I’ve read that too. Given that Chord and most other manufacturers have the option to buy their cables at 1m it doesn’t really make sense. Also an extra 50cm of cable that’s not required, especially if it’s very stiff, can be a real challenge to deal with. Also why 1.5m, it seems a very convenient figure, I mean why not 1.2m or 1.95m?

There is a lot of this sort of hi-fi folklore floating around and I’m not sure anyone really knows how or where it originated or how valid it is. Often in the fullness of time these things are simply forgotten about, with no ill-effect. Much like having a TV in the room with your hi-fi kills the music, as was widely put about by Linn and Naim in the 70’s / 80’s. If it were true then judging by the System Pics thread there are so many people with top systems that are simply ruining them!

While I agree with what you wrote about folklore in general, current LED, etc., TVs are not comparable to the cathode ray TVs of old, and what might have applied to those does not necessarily apply now.

My understanding is that it was the speakers in the TV’s that were supposed to cause the problem so display technology is irrelevant. I was even told by my dealer, apparently on good authority from Linn, that wearing a digital watch was fatal to the music as the alarm sound generator in the watch completely destroyed the pitch integrity of the music!

I don’t know what is true or what is folklore, but one thing is true, no manufacturer sells 0.5 m power cable for audio.
Personally I would not shorten the power lites.

I see. I suppose it was the days of single speaker demos, which nobody is doing anymore either

Luckily the speakers in modern TVs are tiny

The watch thing is funny. There is a current snake oil merchant saying that having a smartphone in the same room destroys the music, which of course can be fixed by their snake oil.

Hello all,
My first post,but been a Naim user 40 years.
I would have thought the shorter the better,since they are not screened.
Its just an ordinary lead with a fancy plug,isnt it?

Its just an ordinary lead

No such thing in hi-fi!

There are plenty of snake oil products still around if you care to look for them. Some of these verge on being witchcraft. Ringmat sell a small piece of clear polythene marked with what appears to be circuit board tracks. It is claimed that even having this in the same house as your hi-fi can alter its sound drastically and that even after removing it from the house the effect may still persist for several days! If this were true then I would destroy the device by burning it as it is clearly invoking some sort of unknown force of unknown potential that could possibly be a danger to human health!