Hi Phil,
My post 527 on this thread refers. We were more fortunate in that UK Power Networks (our DNO) allowed the 8kW PV array and the Powerwall.

It’s a good idea to use some battery storage to make best use of these Octopus tariffs, though the best combination varies on a case by case basis. We are delighted with our Powerwall, though an alternative may work equally well for you.

Pretty much what I’m using the battery for. With my, small, battery currently about 80% of our consumption is at off-peak rates. Will be interesting to see how this develops as the days shorten.

I guess car-charging off-peak helps and since we don’t really do much mileage it’s rare to need to charge in peak times. Sometimes it takes 2 or so nights to fully recharge due to the limited Go off peak period of 00:30-04:30 (also because I can’t quite figure out why the charger isn’t operating at 7.2kW rather than 3.6kW); note there wasn’t any car-charging in the image above, just home-battery charging and water heating.

The only downside I can see to Octopus Go is that it limits the export tariff to Octopus’s ‘Smart Export Guarantee’ at 4.1p/kWh rather than ‘Outgoing Octopus’ which can offer 15p/kWh. I don’t think ‘Agile Octopus’ has the same restrictions but is a little more complicated in terms of the dynamic pricing.

Of course… you could always sell your excess to someone else, I think SSE was the most competitive at 5.5p/kWh when I looked.

i read there is only about 4 million smart meters fitted,

Not sure where you got that from Gazza, unless I am misunderstanding the discussion. There were about 26 million smart meters (gas and electricity counted separately) fitted in domestic homes as at June 2022. That’s about 45% of all homes.

That would make more sense……it was a newspaper quote😬

There’s a lot of anti-smart meter stuff in the press!

This link is to the official Government statistics for June 2022.

Interesting……i wonder if they will eventually force people to have one installed…….or give a stick and carrot approach with incentives.

Until very recently I was involved in that programme at a senior level. I would say there is no appetite to make smart meters compulsory, but in the end I think most people will choose to have them because of what possibilities it opens up for them, especially as all the old meters will eventually be changed out as they get to end of life. The arrangement currently is that people can choose to have their smart meter dumb if they want to. You can see that mentioned in that report.

Of course some older people won’t ever be persuaded, but the number of those will reduce naturally!

But the decision on making them compulsory or not is going to be a purely political one. Who knows where the energy cost crisis will lead us?

I think there are only about 28 million homes in total in the uk. That would suggest that about 93% of all uk homes are on a smart meter. Is that right?? If it is, I’m in the 7%!

So it’s just under half of all domestic premises that have smart meters currently. And it’s 28M domestic homes currently.

I have edited my first post to correct this error.

Of course some older people won’t ever be persuaded

I heard it wilts your celery

The system has been installed and working away happily. I recently added a solar diverter to prioritise using the immersion heater over exporting electricity to the grid.

On reflection I should have probably bought the ‘MiEnergy’ Eddi but went with the Marlec iBoost because of availability. The MiEnergy Eddi would have probably offered better integration with their Zappi car charger which I suspect is on the shopping list for summer months when I expect to be exporting quite a lot of power.

Something happened this week that I wish I’d considered before installing the system. Normally the battery is charged to about 70% overnight with the remaining power coming from solar during the day, the battery is then used to power the house once the sun goes down. One morning the battery was only charged to 25% and digging into the details this was because it only charged at 500W-1kW during the charging period rather than the normal 3kW.

Further investigation showed that the battery temperature had dropped to 12degrees prior to charging and this had not happened previously. Switching on charging I watched the battery and it started charging at a higher rate again once it warmed up above 15 degrees.

I guess I’m going to have to better insulate the area of the loft that the battery is in. Had I known I’d have done this when I prepared the area for the battery/inverter.

12degrees doesn’t sound that cold to me - a little surprising.

My Eddi arrives the week after next so I am mulling over how to set the hot water. I suspect this will vary depending on the time of year. An ex colleague of mine has found during the summer months they didn’t need to use their boiler at all and this is on a similar 3kw system.

Initially I think I will do as @GadgetMan has done although we find 50c normally OK.

I’m wondering about how good the Willis heaters are. These are external immersion heaters that draw cold water from the bottom of the tank, heat it and put the heated water in the top. The length of time the heater is on will determine how much of the tank is heated.

Apparently they are very popular in Ireland, being fitted to most homes.

We had a 210l cylinder fitted with the ASHP, which has a number of places for the sensor to be fitted. We put it 550mm down from the top. The large cylinder is in case we want a bath. However, the fast hot water mode has kept up with the grandson’s bath recently!

We only heat to 48C with the pump. We can heat the water whenever it has dropped 10C, but it’s scheduled for an hour from 4am. Sometimes we go 2 days. Each heat takes 2kWh in winter and 1.5 in summer. There is an immersion for Legionella on a timer to meet MCS requirements!

I don’t spend much time in the shower. My wife does if it’s piping hot! We don’t use as much hot water now. I’m not sure about the Eddi, but the Zappi comes with the PV and battery at the end of January.

The eves of the roof are the weak point in the insulation of our chalet bungalow. Without reroofing it’s difficult to add PIR board. We are going to do the the eve’s cupboards with mineral wool on walls and floor (will loose the storage for hoarding!).

Isn’t having the immersion coil at the bottom of the tank correct? Surely hot water rises to the top displacing the cold water to the bottom? Inlets and outlets then have to be positioned accordingly.

Thus when he immersion is used only the top half of the tank is heated.

The Willis heater I was referring to is external and draws colder water from the bottom of the tank, heats it and replaces the cold water at the top of the tank. As the tank heats you get a fuller tank of hot water. 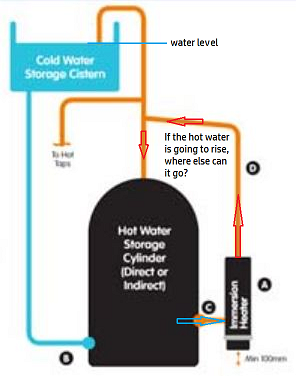 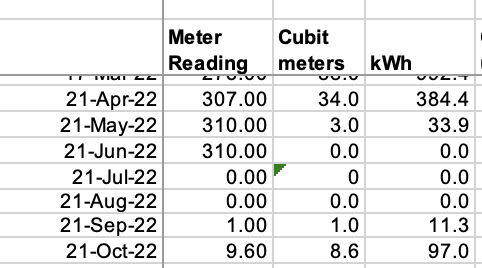 Yes, absolutely, as my element is at the top, whereas the coil from the heating is at the bottom. I have a thermometer at the top and another half way. When the top is 65, the middle is showing about 34-40. Another reason to set to 65. And of course you need to get the water to 60+ every now and then to ensure legionnaires disease don’t get hold.

I often wish I could stick a stirrer in to mix it up. However as there are only two in the house, that is plenty, as it will get topped up again after a bit of use.

Below is following central heating being on. The extra sockets around allows me to manually switch the current going to the Element to go to an electric fire in the hall, which ensures I use every bit of energy I’m generating. 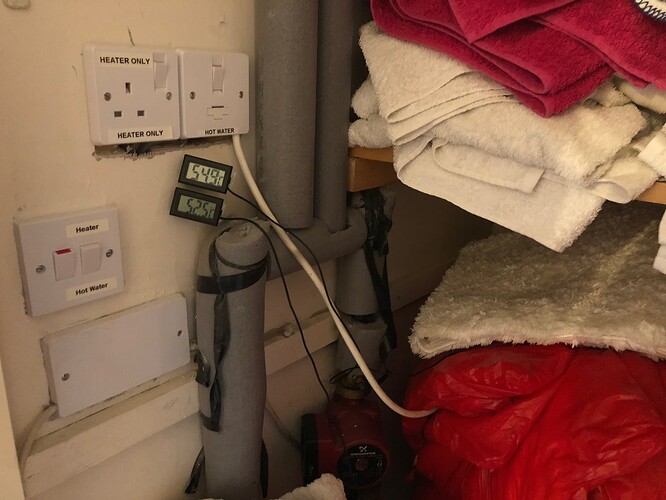 You can actually stir it up by using a de-stratification pump. This is connected between the inlet and outlet of the tank, thus mixing the water up. You need some non return valves too.

Apparently it shouldn’t run for too long otherwise you can end up with tank full of warm water rather than half a tank of hot water.

The Eddi has an add-on relay board that can be set to run the pump for a short period of time once the top of the tank is up to temperature.

This seems an expensive solution to me. The pumps are quite expensive as they have to be corrosion proof. This is why the Willis immersion is appealing as they are cheap to buy and quite simple to install. I suspect a plumber will take up to 2 hours to fit one.

That’s a good idea to run a heater once the tank is up to temperature. I suspect with our 3kw system we won’t have surplus for much of the winter as production is quite low now. This isn’t helped due to the angle of the panels which will hughly benefit output in the summer but not winter!

In your case, you probably wont need to divert to a heater. But for me the extra heat that comes out often takes the chill off the house, and then I may move it to the living room for a bit which means we often don’t need the heating on at all

Very interesting. I had noticed that heading towards winter 2020 my batteries wouldn’t charge at a rate beyond 1kw and were diverting any surplus to water heating or the grid. I brought the issue up with the supplier but they said it was probably because one of the batteries (2 x 2.4kw) needed to be reset. I didn’t want to try that myself, and they couldn’t visit me because of Covid restrictions.
But lo and behold, come springtime the charging rate went back to the normal 3kw +. I’m now into the 3rd cycle of the same phenomenon.
Mystery resolved, it appears.