Songs not grouped in an album

I have some songs not being grouped or show as one single album in the app. The all have the same album in the album attribute. They are all listed out as one album with the same name with only one song in it. For CD ripped, the songs are showed under one album. This makes the Album view unusable.

Anyone know a solution? I see a thread suggest that I can do a search by album name. I think it is a work around. If possible, I would like to see the albums in the album view. It is much easier to browse and choose what album I want to play.

There must be a problem with the metadata. Which upnp server are you using. If you select all the tracks on your server using dbpoweramp or similar, are they all showing as the same album and artist?

My NAS is a West Digital ShareSpace. There is no UPNP server in it. I think the UnitiServe access it using NFS?

How to check the meta data? In Browse Music, as shown in the picture below, there are songs listed as separate, all with same Album “Acoustic Audiophile Voices”. But the albums (Acoustic.Magic, Andrea Bocelli - Passione … etc) below are grouped correctly.

One more information, for those not displayed correctly, I use CUESplitter to split it. They are originally one FLAC file with CUE sheets. But CUE is not supported by UnitiServe, so I have to split them.

I will try another splitter, or split it into WAV … 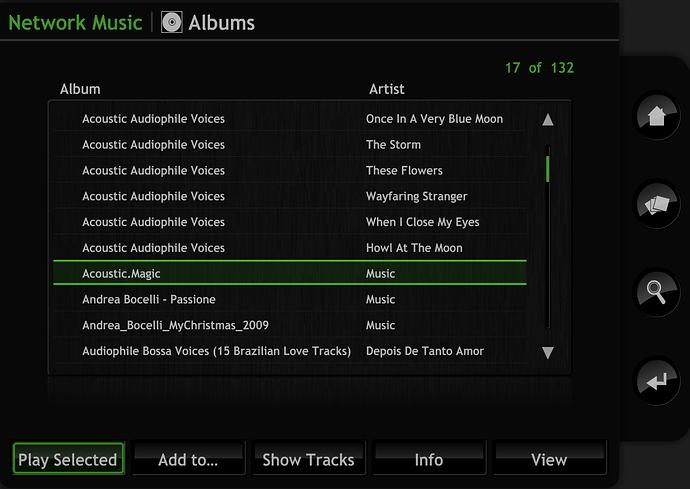 ok, I tried the following, and both failed. The songs still not grouped in one album.

I don’t know what cue splitter is, but the artist shows song titles for some reason.

If the CD is ripped on a UnitiServe it should only be edited using nServe. If in the downloads folder you edit via your computer.

These songs are not ripped from CD by UnitiServe.

Yes, the artist field has the title, which is a different problem. But my bigger problem is the grouping of songs by album. If the album field has the same name, what is the reason that UnitiServe or the app doesn’t recognize it as the same album?

If these are in the downloads folder of the US, you should use something like dbpoweramp to check the metadata. The app only sees what the server sends to it, so the issue is with the metadata.

I’ve sometimes had the odd album where this would happen. I’d swear the album is the same for all the tracks but the server would see them as different. Selecting them all and block renaming the album would fix it. I’m guessing some random space char or whatever was the issue. I’ve also had the same effect with AlbumArtist.

How or what tool do you use to rename them?
Thanks.

I use MediaMonkey 4. Been using it for years now… I have the paid for version but I believe there is a free version.

If you have a Windows computer mp3tag is free and good, and despite the name it will handle a wide variety of audio formats

Thanks, I will try that. But Foobar is able to see those songs having same album and group them as such … I am really confused why can’t the UnitiServe do that.

If the two fields Album and Album Artist are the same most UPnP servers will consider them as a single album. If you have not got Album Artist set then the server will assume it is the same as the Artist.

This seems to be what is happening. I would set the Album Artist for Acoustic Audiophile Voices to “Various Voices”. Alternatively you could leave Album Artist unset and set Compilation to 1 instead of 0 (or On instead of Off is some systems).

I’m unfamiliar with the UnitiServe, but this would definitely work with JRiver and MinimServer so may help.

I think Foobar is clever enough to assume if the music files are in the same folder then they are part of the same album. JRiver would simply complain if this were not the case. Other players may not be as clever or informative,

Indeed. Once set up like you describe, it will work. The AlbumArtist tag is the key here

Thank you very much.