I got into streaming believing bits are bits and none of the CD or Vinyl tweakery.

So having gone through Spotify (Native), Tidal (Native), USB HiRes rips, Tidal / Qobuz (Raspi UPnP) to media servers, it is clear the transport really shines with a better input, i keep coming back to the GIGO (Garbage in Garbage out) principle.

Each of the aforementioned steps brought nice gains, but the media server by far (suppose given the cost it should) was/is the biggest improvement.

So the question is should the input to the transport really be our focus, in terms of a source first ?

Very possibly, yes. @Simon-in-Suffolk replaced his NDX with an NDX2 as ‘transport’ into a Hugo DAC.

It’s crossed my mind to replace my ND5XS, used as ‘transport’ into my nDAC/XPS, with an NDX given how prices are falling.

Some on the forum have mentioned the benefit of a Melco source directly connected to the ND555, not via a switch …gets the best out of the streamer. I tend to agree from what i have heard, but need a serious demo at some point.

Not in my opinion, the DSP/DAC and what follows makes the difference. I’ve heard Melco and Inuous with my kit and preferred my Mac mini running JRiver Media Centre because I could apply room correction. With a Linn DSM it made no difference as I could apply Space Optimisation. I also prefer a tweak and gadget free server and signal path and I avoid audiophile cables. The only concession I’ve made is not to have my Mac mini on my hifi rack.

Sound quality is subjective and if it sounds better to you then it is better, but I found moving from Naim DAC with 555PS to a Chord DAC worked for me. I enjoyed the Naim DAC for a good few years and lost very little when I sold it so I would always regard it an excellent purchase. When I had it I used an April Music Stello U3 as transport.

If curious try to find out if you can hear a difference between a boutique music server and laptop computer without knowing which one is in use. Without room correction/SO I couldn’t, but others have found they can, which surprises me, but we hear what we hear. I admit I prefer the build quality of specialist music servers and their domestic acceptability, but my hifi is fairly well concealed.

I can easily hear the difference between Naim & Chord & Linn DACs and different amps and speakers, but not between music servers. If you can you can & if you can’t you can’t I guess.

I have a Linn KDSM fed from a Sonictransporter via Ethernet and feeding active speakers via Exakt, so the signal is digital all the way to the speakers. I am also using sound optimization.
At the weekend I was able to home-demo an Innuos Zenith MK3. I was expecting to hear no difference, even if it has a linear PS and my ST does not.
Guess what I heard?
No difference.
A couple of years ago, however, I tested a Melco server feeding an NDX and was amazed by the improvement in SQ.
So, IMO, with Naim equipment feeding passive speakers, the server and its PS can make a difference but with a Linn system using sound optimization and active speakers there doesn‘t seem to be much scope for enhancement using audiophile server/PS and expensive cables.

Perhaps that is why I can’t hear it as my sources are Linn & Chord Electronics.

I wasn’t intended to be a must buy a server, my point was WHATEVER is used as the input into the chain, is that THE most critical block in the chain, as regardless how good the DAC or Transport is, it cannot recovery what was NOT provided in the first place.

I would say it is early days yet. Personally I am currently evaluating servers abilities metadata/tagging as I like to curate and make my own associations through the recordings. I am a bit surprised this area is not better developed.

I think of the DAC as the equivalent of a cartridge. Not that important if you base your judgement on musical performance. I know others hold on to their DAC:s as their prize possession and they may be right - personally I just dont see the case for that position right now.

The less job the streamer has to do the better job it seems to do. Go as low as possible on sample-rates, bit-depths and complicated file formats, this allow the streamer and its DAC to be more accurate. Higher numbers dont always equate better musical performance.

They are all as important as each other in the chain… a weak link will compromise the other components in the chain; the AES library had an interesting article on limitations of Hidef as determined by all the components in the chain, from record through to speaker reconstruction.
The transport in real world engineering is crucial, as it is in most setups quite or very closely coupled to the DAC (comprising of filter reconstruction, converter, current to voltage converter and analogue output stage). Traditional system engineering is quite useful for defining the coupling errors, and non linear artefacts created through the system coupling.

Now Naim have focussed on a high degree of decoupling at the Ethernet level in terms of data noise and common mode noise with the new streamers, but like most things can’t be 100% effective. Interesting a Melco or a quality switch can mitigate common mode noise and serial clock sidebands, however data noise has to be managed sepereaty by creating a new seperate routed subnet along with helpers and multicast routing and IGMP snooping.

So the question is should the input to the transport really be our focus,

Could you be more specific, as the term transport is sometimes used in different ways?

Of course, the real source is the music file, the recording as purchased or paid for by subscription. And that is paramount - yeu so dependent upon the quality of te mastering, with some hi res not sounding as good as some 16-44 …and then there was the diabolical ‘loudness war’ that seemed to affect digital not vinyl, simply serving to make vinyl have a better dynamic range than some digital, which is nonsensical.

But with any given file, I think of the source as being the DAC, rather than the UPnP server, if one is used rather than playing the file direct, or the renderer, creating the digital music stream ready for the DAC. My reasoning is that that is where the analog signal is created, and because in my experience the DAC makes the biggest audible difference in that whole process.

Otherwise, if not the file, the source would be the first step that might possibly affect the sound, which would be either the streaming across a network (uPnP server and network), or streaming across the internet (provider’s streaming software and internet effects, or renderer (playing direct from a file stored in the computer).

So the question is should the input to the transport really be our focus, in terms of a source first ?

It depends on the transport source. If asynchronous and highly decoupled, like TCP traffic from a media server, then no not that important… though inter frame timing consistency can be audible, especially with legacy streamers, as I measured.

The degree of unfiltered Multicast and Broadcast traffic on a users network will also have a bearing due to additional processing load put on the streamer network stack. This has nothing to do with the physical serial links. (switches, Melco, fibre, etc)

You can see why Naim took network decoupling so seriously on its new streamer platforms, to minimise the variations and influences that could affect SQ which were quite evident on the legacy platforms.

Your not going to go all MQA are you

Whatever and however is serving to the transport/dac

Whatever and however is serving to the transport/dac

Nothing in what I said suggests that!

Your not going to go all MQA are you

Hmm, as I indicated, in my opinion the DAC is most significant step in the digital path in terms of the sound one hears, though I agree that anything messing up before that is a problem. But overall it is rather like considering analog source, where TT, arm and cartridge all have an effect, and it is hard to say which is the most or least significant because if any one messes up the rest have had it.

it seems to me dacs and streamer plat forms are at the end point , dealers seem to be say their sales is falling with the biggest increase in sales is for all in one units. new hifi customers are surely selecting using tidal etc.

That’s a good point, they are called END POINT for a reason.

Thanks to Robert Kaplan on Facebook for this reminder, if you apply these thoughts to believing what you hear … 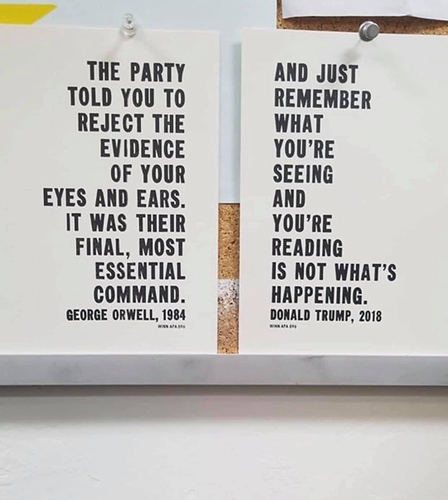 I’m just amazed at how good CD music can sound and love the convenience of ‘streaming’ now I have sorted out what works for me (nDAC + 555DR is sublime for me). Not saying I would not have gone down another route if I knew what I know now.

The problem is that you can’t just put boxes together and get instant sublime results (perhaps allowing for time for things to burn in). It shouldn’t be asking too much particularly if one spends quite large sums of money. Anyone who can crack this problem should make a fortune! But it’s a fun hobby if you get a solution that works…

Not sure what the point of this thread is. You need a DAC worthy of the rest of your system whether it is in a streamer or not (as in my case) and there are technically challenging problems getting the music to the DSP/DAC.