Speaker dilemma – a long ramble (you have been warned!)

This is a ramble as I am sort of thinking out loud.

After years saying “I must sort out my hifi”, having accumulated various bits over the years largely sitting in a room where it was never listened to, I finally had a big change at the end of last year. Sold off virtually everything and acquired a Nova and Core and had my LP12 properly serviced. All good so far.

I had 3 lots of speakers around in the house. I sold the Ruark Talisman III (never did like them) and some Monitor Audio speakers. And, just for a laugh, connected up my B&W DM4 speakers which I have had for the last 40 odd years and which were being used as bedside tables (oh the ignominy). What a revelation; they were finally being properly driven and sounded great.

But the grand plan is to aim for good enough and then stop. I am determined to avoid the upgrade treadmill as that route leads to permanent dissatisfaction and anyway I simply don’t have the budget.

And speakers and stands are the last part of the jigsaw.

The listening room is appalling. It is small (roughly 12’ by 12’ but with some bits cut out by a stairwell and chimney) with a low (<7’) ceiling, it is cluttered as it also doubles as my office although that does have the advantage that I can listen a lot. I have tall speakers stands as they have to lift the speakers above the desk level. My listening is primarily classical with some jazz and 70s rock.

So to the speaker conundrum. They have to be stand mounts, there is simply nowhere floor-standers could go.

I read this forum and the old forum and generated a short list of possible speakers. The only ones that my dealer had were the Dynaudio S40 which I borrowed for a few days last week. I used my own playlist plus some from the “What’s your top reference track” thread.

I was impressed by the S40s especially the bass from such a small speaker (the DM4s are considerably bigger). With a bit of playing around with the positioning, I avoided any boomy bass and got a good soundstage. By Saturday night, I was all ready to ring the dealer and place the order. Unfortunately this is where I made a big, although inevitable, mistake. I packed up the S40s to return them and connected up the DM4s again. Yes they didn’t have the heft of the S40s or the bass but, and it is a very big but, they sounded better to me with more attack and just more musical. The killer tracks for me were Richard Dane’s suggestion of Zaide and the Drum Processional from the Music for the Funeral of Queen Mary (Academy of Ancient Music); the former was more coherent and better balanced on the B&W and the drums were far more impressive in the latter with the cathedral reverberation only slightly less than the S40. I have to say I was surprised. There were certain tracks where the S40 clearly outshone the B&Ws so it is not entirely clear cut (Benny Goodman Sing Sing Sing – not sure of which release but the track is timed at 5:02 – a really good test track). The DM4s had a better soundstage as well but that was probably down to not finding the ideal positioning for the S40s.

I’ve given it two days and I realise that I do not miss the S40s apart from the bass.

So where do I go from here? The DM4s are good, much better than I realised but they are not quite there overall. My dealer has suggested that I try the B&W 705 S2 which he should have in shortly; they also have an ex demo pair of B&W 805 D3s which might be a possibility if there is any room for manoeuvre on the clearance price.

Unfortunately the other speakers on my shortlist which are currently Neat Momentum SX3i and the Proac Response D2R (when available) don’t seem to be available for demo reasonably locally. PMC and ATC an outside possibility but, from reading, they don’t seem to be quite what I am looking for.

Thank you to anybody who has waded through this far. A bit of a stream of consciousness I’m afraid.

Any thoughts as to what I should try out or any other thoughts for that matter?

This forum now makes it easy to upload a picture of the room. It may help to see the room so we know what we’re dealing with.

As a fellow DM4 owner, I agree that they can still sometimes be surprisingly enjoyable and quite refined for such an old speaker. However, if compared to say my regular Naim SL2s, they are then shown up as being a fair way off the pace. The old DM4 was a sort of B&W take on the classic BBC monitor - a style of speaker that still exists today in modern form from the likes of Harbeth, and also the classic Spendor SP2/3. So if the DM4 appeals, but you want something rather better all-round, then you might want to investigate those to get a better idea of where you want to be. And if they’re too much then, with your music tastes biased towards classical, you might want to consider demoing some Proacs, or if you want a bit of a bargain then I would look at something like a secondhand pair of Spendor SP2/2s on open frame stands, but do check condition very carefully.

Be prepared to have a laugh.

The stands will be changed once I have decided on speakers but they can only come down by a max of 10".

To be honest, there is little that can be done with layout. Too many competing demands. (Another reason to avoid the upgrade path - it would be wasted in this room) 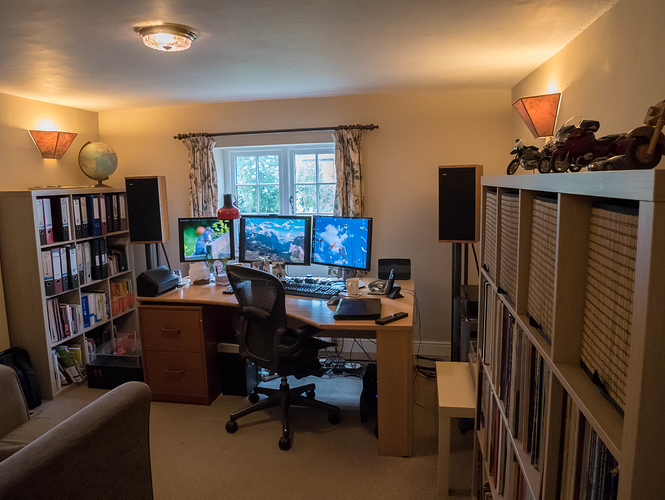 Many thanks Richard. A great summary of the DM4s and the point I had reached. Much better than I remembered but not up there now.

The Spendors were something I had not considered and I will look into those.

Currently my dealer has got a pair of ex demo B&W 805D3 at a very attractive price. Even though they are still rather above my budget, I’m going to give them a try. And then I will see if I can find somewhere to demo the Spendors and also pursue the Proac idea.

Looking at your picture, I wonder if small speakers potentially wobbling on tall stands are always going to present a problem. Have you considered wall mounting? ATC have (fairly) recently introduced wall-mounted versions of some of their most popular consumer models. I have not heard them, but I have heard several of their standmount equivalents and very much enjoyed what I heard. ATC are very “honest” speakers which IMHO particularly suits classical. They seem reasonably priced too.

I’m inclined to agree - if I wanted my N-Sats that high, I’d be using the dedicated wall brackets rather than very tall stands, I think.

All good points above and thanks for your ideas.

The Compass are outside my budget so I am afraid I will have to discount those.

The stands will be shorter when I make a speaker change although still fairly tall (prob. 700mm). I take the point re wall mounting but I think I will live with tallish stands despite their deficiencies; after all the DM4s,which are not small, sound pretty good even on the scaffolding I currently have. I do have headphones but I have never liked wearing them (any - not just the ones I’ve got) and they are not very practical anyway when I am working.

Maybe I was too hasty discounting the ATC and I should put them back on the list.

I have a similar sized media room/home office and use Totem Hawk floorstanders and that works great. Currently run through a Uniti2, but the Nova is moving down there soon. Which, I guess I’m saying, floorstanders could well be the solution.

I own Dynaudios and can testify to their bass bias and also to their finnicky positioning. They like a lot of room to breathe and little or no toe-in. A house move last year forced me to audition alternatives due to less than optimum siting options. I found PMC Twenty25’s to be a good compromise - unfussy on position, good bass response and their size meant aesthetically they didn’t dominate the room. I didn’t buy them as for my tastes in music, they were a little too polite. Might be an option though and plenty around ex-demo at dealers.

PMCs back on the list then. Once I’ve tried the B&Ws that my dealer is getting in, unless I am comletely bowled over, I will start looking at all these ideas - although time and distance may be a challenge, still there is no hurry if I am honest.

I just can’t see where I can put floorstanders without at least one of them being hidden behind furniture.

The retail price of the Compass is similar to the B&Ws, so a used pair might be a comparable price. I think they might be a good option given the unusual way the angled drivers throw sound into the room.

That room is a challenge, the next bit maybe wrong as I’m going by your picture, can you move your desk slightly to the right ? if so you maybe can accommodate a small pair of bookshelf speakers on stands that don’t make your eyes hurt. The speakers should be sealed box or front ported and be comfortable in the corners, already you have a few on your list, Proac, Spendor, PMC, I’m sure there are more.
Good luck will be interested in where you end up.

Yes - there is a little bit of movement available although very little to the right. I would still need stands that take the speakers to at least desk level (29") but they would be signifcantly lower than the current monsters.

I must say that I am tempted by the Spendors at the moment. When time permits, I need to go on a Google search for a dealer not too far away that makes a home demo practical. It makes such a difference where you hear speakers that a home demo is essential in my view.

You should have no difficulty in getting stands to fit that criteria. Spendor make good speakers and are a good match with the Nova, I tried Spendor, Proac, Kudos and ended up with PMC Twenty5 23 in my Nova set up.

I will have a closer look at them - they do seem unusual.

KEF LS50 Could be an excellent choice. Play well above their price point (and size)