I’ve recently bought a pair of Neat Orkestra’s and have them toed in towards where I sit and they’re at ear level, they’re also set about a 1m from the wall. I’ve been impressed with the SQ overall but was wondering if they need to be toed in or should they be set flush.

I’m interested to know if most people toe their speakers in or not and why they prefer one option over the other.

It greatly depends on speaker design and room.

Some speakers (quite a few actually) are designed to fire straight ahead. Others not so much.

Does the Neat manual provide any positioning guide?

One thing I often do is try simple vocals firing straight, then heavily toed. This tends to give me the indication of whether the off-axis respinse relies on toeing or not. Then I try with more complex music to determine the amount of toe in. Often there is a sweet spot between focus and width of soundstage.

I often use slidey spike shoes for this step like Linn Skeet. Then swap in the desired shoes once done. Some people spend ages on this task but I tend to get it done in 30-60 mins.

Well of course the obvious answer would be to try it with varying degrees of toe in. I personally have minimal if any toe in with the Sopra-3s. The beryllium tweeter can be a bit bright with full toe in to listening position.

I wasn’t really looking for an obvious answer, I was interested in what others are thinking.

The sliders are a good idea, my speakers have down firing bass drivers and sit on rather sharp spikes that rest in little discs (supplied by manufacturer). They aren’t that easy to move without the risk of injury. Cheers.

Also I read a review and he thought they needed to be toed in.

My speakers are heavily toed-in until center image is in focus and wide soundstage, speaker disappears.

If that’s carpet, Skeet won’t work. You’ll need to get some dedicated speaker sliders and temporariliy remove the spikes. Then mark out the position in masking tape before putting spikes back on.

I do have some skates that are designed for carpet, I just have to find them.

I have my Totem speakers facing straight ahead, which is what they recommend as a starting point, and to only try toe-in if you don’t have good imaging. For the main system, I’ve worked on getting the speakers forward of the rear wall and clear of the nearest side wall, both by about a 1m or so. Then having listening spot on an equilateral triangle from the two speakers. It might take a bit of fannying around to get it right. Do Neat publish a guide on speaker set-up?

This is all they say.

I have mine toe’d in quite heavily.
They are on a long wall & fire across the room; I arrived at this after a long time trying different set ups, living with it for a long period before trying something else. I found this gives a wider stereo listening stage so both of us get to get the best out of it.

You need to use your ears.
P.S. Mine are significantly toed in
(speakers that is not my ears!).

How far apart are your speakers at present…? And how close are you…?

The further apart they are and the closer you are, the more they may need to be toed in.

Kudos say - “Place your speakers in the position that would work best visually. Make sure they’re not too far apart, we recommend around 2m and at least 2m away from the main listening position for optimum sound quality.” 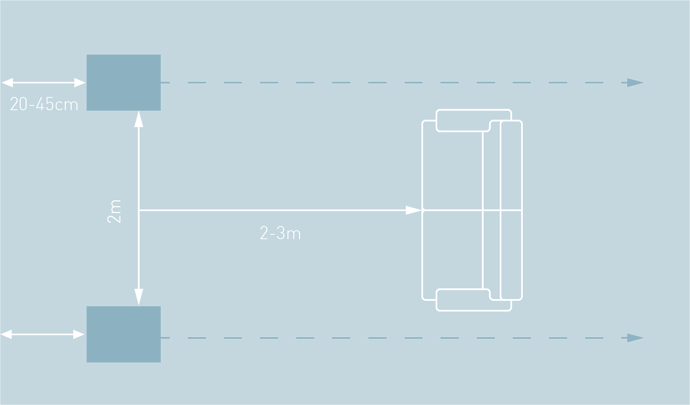 I use Neat SX3s. I have them toed in about 20°, and I sit close, as far from the speakers as they are from each other, so their axes “cross” quite a way behind me, I can still see quite a bit of the inner speaker face in other words. I occasionally try them firing straight, and occasionally entirely on-axis, but seem to return to what’s half way between those extremes - 45° would be on axis for my listening position.

I find it useful to try the extremes, as I’m not sure of my own ability to hear the difference. By being “silly” I’m happier that I can actually tell, and then go from there to find what seems right.

The (terribly blurred it seems!) pic below, looking straight at the left speaker, shows how much toe-in currently. 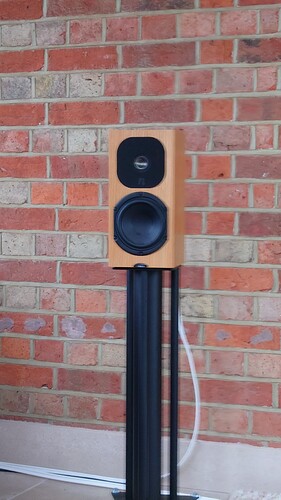 It ought to be very room dependent. I have used Cardas golden ratio to start and then adjusted by ear. But in my room putting the speakers in the room boundaries really messes up the sound and makes it sound like a stereo instead of music just hanging in the air, if you know what I mean. Speakers also need to be a bit tied in to get a balanced and airy sound. My front baffles are approximately 180cm from front wall and 113 cm from side walls any closer than that and no fun.

When I set up my Thiels back in the UK I started from the Sumiko Masterset method but kept them pointing straight ahead until I had them both positioned to my satisfaction. Then experimented with toe in, which turned out to be just a few degrees. They came with cones rather than spikes and were quite easy to move on carpet.
I replaced them with NBLs which went nearly as close to the wall as the Naim speaker plugs would allow. This was from the dealer setup but he suggested I experiment with lateral placement and that resulted in their centres on the same line as the Thiels had been and confirming his distance to the wall, they were a bugger to move once the spikes were in.
The two rooms I’ve set up in France, one initially with the Thiels were both much larger than the 4.1 by 3.7m living room in the UK. Distances to side walls could be much greater, close to a metre on the nearest side, but the room shapes meant that the speakers couldn’t be symmetrical to the side walls. I used Herbie’s small spike shoe gliders with the idea of limiting impact on the flat below but they also made position adjustment very easy, in fact I had to remove the Thiel’s out riggers as I kept moving the speakers by accident with my foot. Here the Theils took slightly more toe in, 10mm rather than 5mm difference at the corners, they’re 20cm or so wide. The NBLs again required the same distance to the back wall as in my UK room and no toe in.
The last room has plasterboard walls. The Thiels are now with my sister in law so I’ve not tried them here but started out with the allaes as I didn’t expect the NBLs to work without solid walls. I didn’t like toe in on the allaes here but did find some bass quite a bit further in to the room than I’m used to with those. I’ve now got the NBLs working here and the front’s are where the allaes ended up. I tried some toe in but reverted to straight ahead again fairly quickly.
I’ve played with the distance between the speakers may interact with toe in to some extent when trying to get the impression of scale right, there’s a definite sweet spot with the NBLs but I only did that experiment with them pointing straight ahead. I did play around a bit with both on the Thiels but didn’t reach any firm conclusion before I’d repaired the NBLs following their move.

My ATC SCM40 have no toe in as they can sound a little on the bright side. My listening position is too far from the speakers for an equilateral triangle.

I have linn isobariks and for many years used them ‘straight’. However recently after reading a few posts about room acoustics I had a play around and found they were better just a couple of degrees toed in. I think it is more down to avoiding exciting room modes than anything regarding the speaker design itself

Generalisations (esp mine) need a big pinch of salt and can’t replace trying it yourself, but…