I am thinking of replacing or at least demoing some new( or second hand) speakers to replace my B&W DM4s. Obviously they have to be wife friendly so they need to be roughly around 750mm high and placed against the wall.
I would like a pair where I don’t need to add a sub woofer.
Look forward to you recommendations.

Neat iota alpha, or if they can be a bit bigger s/h Sbls.

Depends on budget, but if you like the B&W sound, look at the new ranges. I really like the new continuum mids.

There aren’t many speakers that were really designed to up against a wall, so many will have the bass booming into the room if you do this. The exception, of course, is Naim speakers, so if you fancy something vintage, maybe SBLs.
The Iota Alpha suggestion is a good call too, and they are certainly well under your 750mm limit. Maybe the larger Iota Explorer would also be worth a look.
Many of the ‘tower’ style floorstanders that are so common these days will be too tall. You might condider Kudos X2s, which are quite unfussy about room positioning, or maybe the Neat Motive SX2.

Neat Xplorers, very compact and engaging with plenty of bass,Mine are about 15cm from wall and sound good with my Star

Last year when I went speaker hunting I auditioned a pair of SBL’s, Larsen 4’s, and Neat Alpha’s (all used) because I needed a speaker that would work against the wall and was in this price range. In the end I ended up with a pair of Bookselfs that I thin are extraordinary, and make all of these good but too ‘present’ for the lack of a better descriptor. The Larsen were not bad, but then did this incredibly weird thing on my favorite Cat Power audition track. It made it sound like an entirely different recording! Between the Neats and the SBL’s I would have settled for the SBL’s no question. A year later my wife would still be making cracks about how ugly the speakers are.

I ended up with a pair of white glasses clad Audio Physic Classic Compacts. I’ll try and post a picture later, but I have them toed in and about 11 feet apart and six feet to the listener in the center. Sound fantastic and really disappear nd not that reliant on sweet spot. I do a lot of yoga while listening (see the gray mat) so I make sure when auditioning at the dealers I get down on the floor! The Compacts don’t have a rear port, and port through the seams of the glass panels. A really underrated line I think. I got my first generation demos for half price but they’re on a second now.

Here’s a pic. 25’ of Chord Rumor 2 going up and around the doors and behind the painting (not the 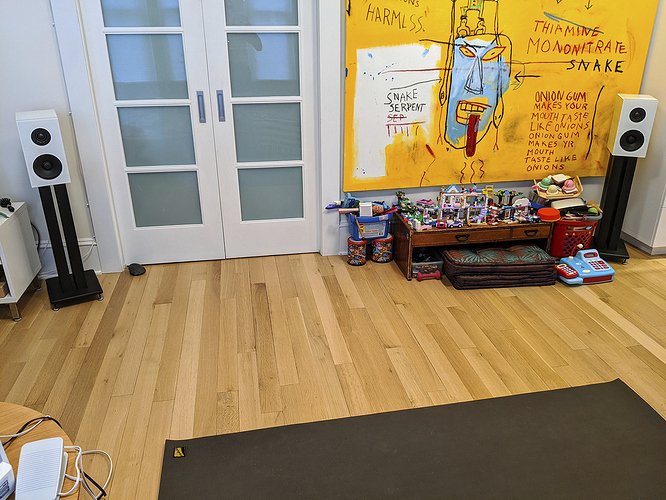 A year later my wife would still be making cracks about how ugly the speakers are.

Ahhhh, you need to lightly marinade her in a pool of ‘in room’ speakers. When you then introduce the SBLs, and have them up against a wall, she thinks they are superb …at least that was my experience, and the marinading only took twenty five years.

Naim Allaes. You will have to get over the the fact that they are slightly taller than you would have liked at 960mm tall and mine have 150mm behind them. They are single wired so you will be able to chop in one of your NAP150s too. Great speakers. Everyone who has them here loves them.

Amazing how often Naim speakers are recommended for near wall placement even now. So few boundary designs are made these days and yet British rooms remain stereotypically quite small. Anyway, SL2s have not been mentioned yet which are nearly as good as SBLs

I would have recommended SBLs had the OP’s source been good enough. I have a similar source to his. That’s why I have Allaes.

A year later my wife would still be making cracks about how ugly the speakers are.

Ahhhh, you need to lightly marinade her in a pool of ‘in room’ speakers. When you then introduce the SBLs, and have them up against a wall, she thinks they are superb …at least that was my experience, and the marinading only took twenty five years.

As great as she is, she has just about zero interest in the sound of the hifi. If I could just narrow down to a Sonos that would be fine with her! So, yeah, things like ad dedicated rack and SBL’s will never be in the cards. Plus I thought these Audio Physics sounded better than the SBL’s so it’s all good.

Can you go a bit taller? I changed my very compact Neat floorstanders for a pair of Graham LS6f’s, thought my wife would freak out at the size but she likes ‘em. They produce a very natural, uncoloured sound, great bass response (especially since I upgraded to a 282) Graham handbuild their speakers in a Devon backwater to the BBC ‘thin wall’ spec’…well worth a look (depending on your budget.