And that’s basically the issue. Years of grilles on while the kids are little has left some ugly tan lines on the veneers of my speakers even though they were never once in direct sunlight.

Once they move to a kid-free zone and they can go naked, I’m wondering if there is a proven way get the tan lines out.

Anyone had success with this?

Different wood may make have different effects. When I got my Cherry Credo’s 22 years ago, after a year there was a tan line. For the next couple of summers when light was strong, I took the covers off and they did catch up, with now just a faint line

Are you referring to your Pmc 23, I have the 20.23 since 2015 no sign of tan lines I think you have the newer version, surprising since grill covers the front

If the wood has darkened there’s not much you can do about it other than let time take its course, but it will likely take a few years to even out.
The only possible fix would be to take off the finish completely and sand back the wood underneath, as the darkening doesn’t go very deep, but that would be pretty drastic.
(Or just paint them!)

Thanks guys. I guess time will have to take its course. @Terry no it’s the Omegas in the other system. The walnut has a light O an inch around the single drive unit from the circular grille.

I was hoping ghere might be a furniture maker’s trick or something but patience seems to be the answer.

Leave the grills on ?

Years of grilles on while the kids are little has left some ugly tan lines on the veneers of my speakers even though they were never once in direct sunlight.

Does the tan line look something like this? Pardon the poor quality photos as I can’t log on to the forum to download to full file. 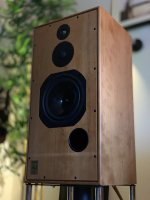 The faded cross line on the speaker caused by the horizontal metal grille brace. 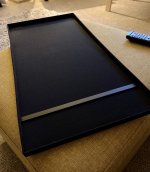 The funny thing is my speakers (the same as above) do not show this faded cross line although they get some sunlight too, and the grilles are on most of the time for more than 3 years. It’s not direct sunlight though. There are some theories that there might be a chemical reaction between the grille and cabinet but that’s unlikely since the grille is metal and not wood with glue on it.

As the saying goes, time is a healer

Tan lines as you call them, or bleaching, is a common & easy’ish job for a furniture restorer. You will need to strip them down so they work on the bare cabinet, it’ll be OK in most cases to leave the internals, damping etc.

Let’s see how a couple exposed years do before going nuclear with refinishing.

Is it bleaching, though, or darkening? I took it to be the latter given use of the term ‘tan lines’.
Some darker woods such as mahogany can be bleached (lightened) by strong sunlight, whereas other woods, notably cherry and most softwoods, darken (or tan) in even moderate sunlight.
I would say that there’s a much higher chance of evening out tan lines than bleaching, although it will still take quite a while.

What wood are your veneers?

I’ve worked with wood all my life on & off, with all the woods I’ve worked with, light always bleaches it, age without light changes colour tone to both light or darker. Whatever it’s a natural change that all wood goes through.
To bring it back to how it was before, the surface has to be removed back to a lower layer. That might prove difficult with some veneers because they’re too thin, solid woods, which speaker cabs do not have, is easy. Whatever a professional furniture restorer will have a solution to do this, some solutions are a compromise.

It is bleaching of natural walnut. So the ring where the grille is looks like the lighter walnut when the speakers were new. And the rest of the speaker has darkened evenly over time.

The frame of the grille is circular and fits flush against the bezel of the single drive unit. So I suppose it could be worse. Maybe less tan line and more like 80s bleach tone eye shadow. The veneers are very thick though so resurfacing is probably technically possible. Whether I want to go that far is another matter.

Bleaching? I thought you said it was getting darker, not lighter. Walnut doesn’t generally darken with age though. It’s possible that other factors are at play with either a change of colour to the finish, which can happen to some lacquers and varnishes, or posibly some chemicals leaching through from the MDF underneath which can sometimes cause darkening through oxidation. Hard to say without seeing it, there are many variables.

My explanation has probbaly been a bit rubbish. Bleaching is not the right word as that implies something got lighter. The more accurate description is, there is an unchanged light ring where the grille was that matches how the walnut looked when the speakers were new. The rest of the speaker has darkened (tanned) despite being positioned in the shade.

The speakers came direct from the production line so the oil and polish on the veneer applied there wouldn’t have settled more than a few days before they were shipped to me, if that makes any difference.

But I think the message I am getting from everyone is pretty consistent. Give them a few seasons exposed to see if it evens out. And if not, sand down and retreat the veneer. Or stop being a big baby and live with it.

Yeah, I would probably just live with it! The trouble with refinishing is that if you do the front, you’d need to do the sides and top or they wouldn’t match so it’s quite a lot of work. I’m sure a pro could do it though.
I am a little suspicious about what exactly is going on though. Walnut doesn’t really darken in sunlight so there’s a small chance that the discolouration is caused by something that’s going on beneath the surface. In that case sanding it back might not work, or the darkening may return quite quickly.
White paint is quite a popular speaker finish these days!

Usually UV light darkens both the finish and or the oils in the wood. In my experience. I have only seen fading or lightening of timber when it is not treated or coated. Like your garden fence.

Yeah. Though I know what @ChrisSU means. Compared to cherry, walnut’s change is very subtle. Cherry just totally goes from from an extremely light colour to dark orange over five years. Walnut is more like lessening of contrast over time rather than a full on character change.

I think based on the good advice on the forum, after they move to their next resting place, I will just give them a thorough going over with linseed oil and then a final buff of Milsek and see how it goes and stop my whining regardless of the outcome.

If you’re going to oil them I’d give them a light sand first. Just a soft 240 grit sanding pad going with the grain. That will give you a better finish and also get you closer to hiding the tan lines.