I’ve always liked Steely Dan. I bought all the albums back in the day, but like many was excited to hear about the 180 gram and 200 gram reissues. It also helped that the first one was Can’t Buy A Thrill, one of the best in my opinion.
The UHQR prices seemed ridiculous so my plan was to buy the 180 gram as I thought that would be a great sounding press at a fraction of the UHQR press. When it arrived and I played it, I thought it was good but not startling, a bit “ harsh” and I felt there were sounds there that were buried in the mix.
Eventually I convinced myself that I would have to try the UHQR pressing, to satisfy my curiosity based on what I had read about them, and also to say that I owned one of those pressings. Surely they couldn’t be THAT good?
Wrong.
From the first few bars I knew I had made a wise investment.
There was so much detail that I had not heard before, with smooth top end, tight deep bass and clear midrange in total balance. It felt like I was in the Recording studio, as I could turn it up to really high volume without any distortion or harshness at all.
The only problem is if this is how all the UHQR’s are , then I will have to get more, somehow. 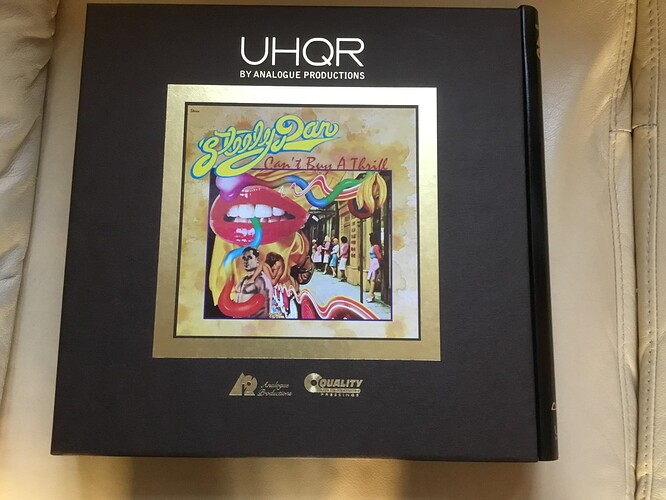 I’m sure they’re fine pressings—they always are from AP. But $150 a pop is a bit steep for albums that you can buy secondhand for $5. Even remastered, Steely Dan’s whole thing is the quality of their production, so I can’t imagine it’s night and day improvement from the originals.

All that said, I’ve pre-ordered all the SACDs for this series, because I’m a sucker for this stuff. But I’ll keep the original pressings for now. And, of course, if I hear thag the Countdown pressing is the bomb, I may lose this battle with myself after all.

The ‘MCLD’ CD pressings of all the classic albums are really excellent. Folks often sell them on ebay thinking they are ‘old’, and hence quite cheap.

I honestly don’t think it can be £200 worth of better than my “Original” 1st pressing, but it is very tempting

Do you have a copy and opinion yet @Richard.Dane?

No, much as I love Steely Dan, I resisted. I tried the regular UMe reissue and hated it - it just totally failed to engage me in the same way that the UK Probe or early ABC did. I may spring for the regular AP 45rpm release in the future (if it ever happens), but at £200 per LP, I’m out.

Not really into A-B comparisons but did just have a listen to track 1 on both re-issues and the uhqr is obviously more detailed and smoother in the treble. This is one of my 2 favourite albums of theirs so happy to pay the crazy price. Probably won’t get them all though.

I think I mentioned before, but am a big SD collector from the first album. Even though I’m tempted, in my case, by Aja primarily and Gaucho, 230 euros here in Germany is just a bit ridiculous, at least for me. Still, ill mull it over in my head.

I have a hunch that that if you have the US firsts of both Aja (AB1006 in the heavy card glossy gatefold) and Gaucho (RL Masterdisk) in minty condition then that may just be all you’ll ever need. I’m ready and willing to be proved wrong though…

Most of my original pressings are no longer enjoyable due to wear and tear over the years and before I knew better about looking after vinyl! I’ve got the Cisco Aja which is very good and in NM condition. Decided I would give the CBAT UHQR a go and have to say the mastering is excellent mostly as Zoomcap described above. Also it seems to be better the louder you play it. With regards the quality of the vinyl and pressing, well not overly impressed for the money. My second disc has a slight warp and there’s a whoosing sound between a couple of tracks, so much for the QC…I’ve asked for a replacement.

Is it worth £200 absolutely not…but I could say that about a lot of things Hi-Fi related. Will I be buying any more…probably, will see how the reviews go.

Hmm, Perhaps I was lucky with my copy then, both discs are totally flat and silent.

As I mentioned the sound quality is so good ( in my opinion of course) that I turned the volume way up without any unwanted noise or distortion of any type.

There’s a new shop in Germany with a direct link to Chad Kassem. Search for Michael 45. 188 Euro each UHQR.

I purchased the Analogue Productions version a few weeks after I bought the latest reissue, and I have to say the latter is poor in my opinion. It’s too bright and there’s too much bass.

The AP version is superb in every way. So well balanced and one feels very close to the band especially DF’s piano playing which is the first things I noticed on first playback.

My only issue is the ‘clarity’ vinyl is not very quiet. There’s two loud clicks between track 2 & 3 on side D and more crackles on the runout same side so it’s gone back to the seller.

The seller has said,( even though I’ve cleaned it on my Project VCE and told him ) he would clean it himself !! , but I think it’s a defect and hopefully I’ll get a replacement.

I think this version is the best out there right now even though it’s overpriced I’ve never heard it sounding this good, and I have a Probe copy and ABC first pressing.

Maybe it’s time to just have on copy of this great album?