I have resisted a subwoofer over the years. I was reading about the Vandersteen 2WQ and model 3, which connect differently than most. It does not insert a conventional crossover between the pre and power amp. It puts a HP filter inline which is a hi quality cap. It then connects to the main speaker terminals to “get the signature sound of our main amps” thru a hi impedance connection, so it does not sap significant power from the main amp, but uses this signal to drive an amp in the sub. It uses 3 - 8 inch drivers, equivalent to a 14 inch unit–to keep the speed of the sub in line with the main speakers. More details on the Vandersteen web site.

Any one try one or two of these? How did it work out? Other happy owners of other subs?

I wouldn’t want to be putting anything at all between the preamp and power amp. I use a Quad L sub-woofer which has a variable low pass filter built in and I set that for 30 Hz. You can feed it from the loudspeaker terminals of the power amp or from a sub output on the preamp.

I agree with you that I would not want anything between pre and power amp, but a single Mundorf or V Cap is probably about as benign as possible. I will check out the Quad L subwoofer and see how it connects.

If I connect to the loudspeaker terminals, then the main amp is not relieved of producing the base frequencies. I have read that this is one of the main advantages of a sub, being that it takes load off of the main amp as well as the main speakers. Feeding from a sub output on the preamp has the same issue. I guess it comes down to which sounds best.

I think you are worrying unnecessarily about the power amp handling the bass. This is what they are designed to do. And using the sub output on a preamp certainly doesn’t make the preamp handle anything that your filter between the preamp and power amp wouldn’t also do.

The point about a sub-woofer isn’t that it takes the load off the power amp and loudspeakers but rather that it produces deep bass that the loudspeakers won’t produce well on their own.

Anyway as you say, listening is the thing to do, but there is a reason why most people don’t have sub-woofers: generally they are completely unnecessary.

With the power amp handling the entire bandwidth, is that you have to compromise between great sounding on top, and lots of power on the bottom bass where its needed. Some do better at one end and some at the other. By spliting the load, it brings better options to the forefront. I am sure there are problems doing this also such as blending the two sounds together, so that they play well together. Looking for experience of others who have been successful at doing this. I do notice that there is not much mention of subs on the forums–maybe most setups do not have them. I also rarely see them in the system pics.

This is the how the REL subs work. Except REL’s been doing it longer.

Within amplifiers, the bass frequencies have very little effect on the reproduction of higher frequencies, in fact in a properly designed amp any effect from interaction of such widely spaced frequencies will be so small as to be undetectable. This can be shown both in practice and theoretically. The power amp will be perfectly happy operating on the full bandwidth signal.

That’s not how REL subs work; unlike the Vandersteens; they don’t intercept the signal between the pre-amp and the power amp and filter it.

REL subs only have one low level input as they are primarily intended for home theatre use rather than for stereo music. This is how their amplifier boards are designed. Even their high level inputs are severely compromised for stereo use as they have only a single 3 terminal connection rather than using entirely separate connection for each speaker (if you think this isn’t so bad, think of a bridge mode power amp like the NAP500 or one of many others!).

Then I wonder if the perceived uplift is from relieving the main speakers from reducing the bottom octaves? Of course, the perceived improvement may be marketing speak. It does seem like if there was a good subwoofer solution and implementation and result, that it would be talked about on this Forum, and I am not seeing it. Perhaps members have tried it and found it to not be satifactory. Based on that experience, I was hoping to avoid the expense and hassle. That would open up funds for some other direction.

The reason I have not pursued this in the past is also I don’t want to corrupt the pre to amp signal in any way, having worked so long and hard to get it like I want it. The Vandersteen approach seems to be the least invasive way to accomplish this. What I was looking for was the experience on this forum to verify that its worth the time and effort, having not seen much discussion of subs–makes we wonder?

I’ll post my solution to this dilemma a bit later when I have more time.

(In short I use a B&W ASW610XP with a miniDSP interface, but there’s more to it than just that!)

@Xanthe Actually you are wrong. First off REL are not know for Home Theater subs, but as they put it they build Sub Bass systems. I’d hardly call the G1 MK II , or the Series S Home theater subwoofers, they certainly can be used for HT, and they do make subs for home theater but that’s never really been their forte. REL’s design is to use a High Level out from ones amp (int or power) the REL cable has three leads…one is red/right, one is yellow/left, one is black common ground.This is a very high impedance load I think 150K ohms so it does not affect the amp it’s used specifically to match the Sonic Quality of the amp’s output to the RELS input to better match sonics. The REL’s use a Speakon connector for this. The RELS have only a Low Pass Filter, which is set to extend and compliment the bottom end of the main speakers. Other companies may use a High Pass filter but REL’s are designed for the main Speakers to run full range and the REL to blend in from the bottom up, picking up where the mains roll off. REL’s do have a Low Level input that is used with AV Receivers as a LFE input if so desired, or preamp outs… I don’t know if you’ve ever heard a REL or owned a REL, or setup a REL, I suspect not. Might want to read up a bit before speaking about something you appear to know little about. 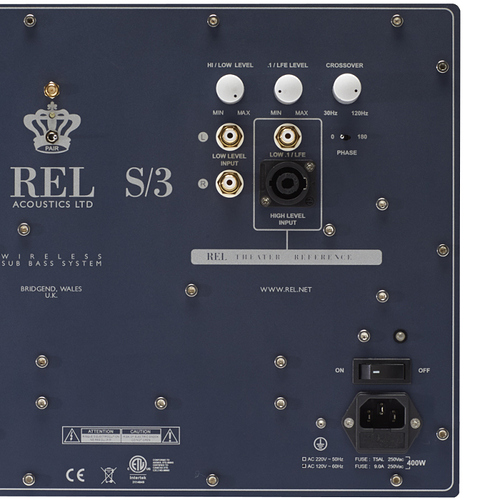 Rick, do you use one and with what components ?

I currently use the T7i. with my SN2 and Dynaudio Special 40’s. I’ve been thinking of an S/3 but the T7i works really well in my small ish space. I’ve both used REL’s and Sold REL’s and I’ve even done the master setup class.

Yes the ones higher up the range (now) have two low level inputs.

…but as they put it they build Sub Bass systems…

Odd, on their website they call them subwoofers, oh well.

I do know how subs integrate with mains, being a scientist and having investigated it, I understand the physics of room acoustics and crossovers quite well. I haven’t set up a REL, but I have successfully set up other subs (and yes I do know not to put them in the corner - that’s patently obvious as soon as you understand the acoustics of a room), so I have practical experience as well. Also, having designed audio power amps, I do also know a fair amount about amp-speaker interactions.

I have heard a REL, but not owned one, and if I did own one I wouldn’t try using a common 0V for a high level connection, that’s just asking for trouble…
1 by not getting the correctly combined sum and difference signal
2 the issue of a second group delay
3 causing the sub to additionally processing the back emf from the main speakers
and that doesn’t even include the issue of what can happen with a bridge mode power amp!

And before you ask, yes I have compared high level and low level interfaces to subs.

Oh yes and I forgot to mention, via its metadata, their website is entitled

Thanks for your info. Interested to hear more when you get time.

Velodyne SPL - 1000
brilliant and integrates well. Its got a microphone set up system I’ve got it off the sub out on a Supernait 2 with Ovator s400 and previously off a flatcap out put from 202/200.
‘The’ test apparently is once set up to switch it off to hear the difference in that with it on it adds a 3 dimensional aspect to the sound 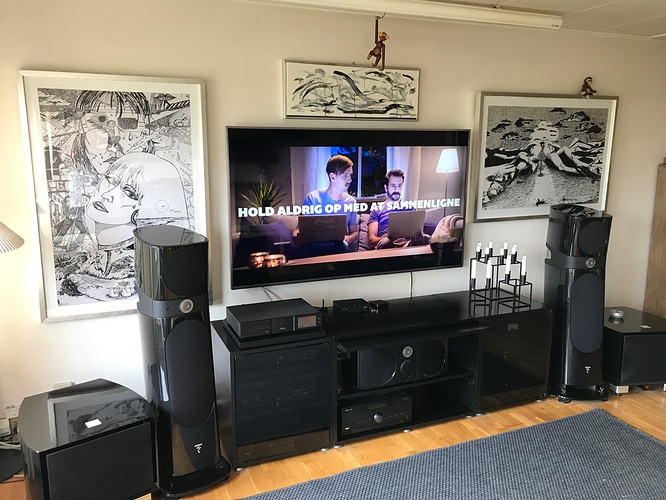 I use two REL G2 sub’s - each one connected to the speaker terminals on respectively left and right speaker - works perfect. System in front is 252/SC, NAP200

Another vote for Velodyne subs - they are a great match for my n-Sats; a really well designed sub that makes great music. They have a remote control and using the supplied microphone you can connect them to a screen and then sit in your listening position adjusting every conceivable parameter until it is just perfect. I believe that set up is the key with any sub and I can’t imagine a better system.

I’m very happy with my to REL S5 SHO. They are connected hi level at my speaker with the black and yellow red wire( not the yellow) work just awesome. 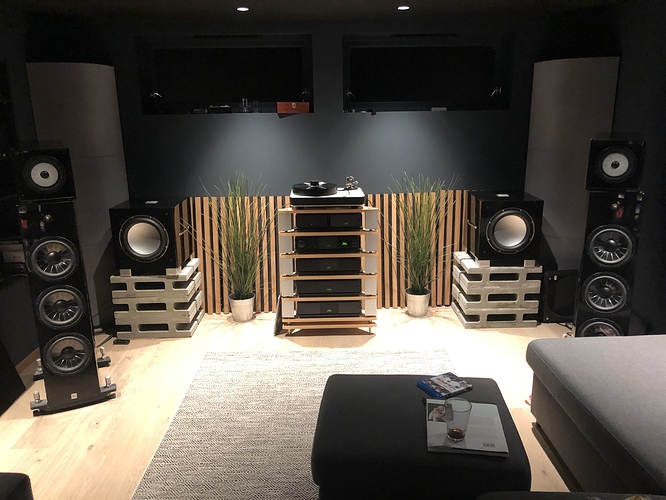