SuperLine for Apheta 2 -- which one?

Early Christmas present to self a couple of weeks back. 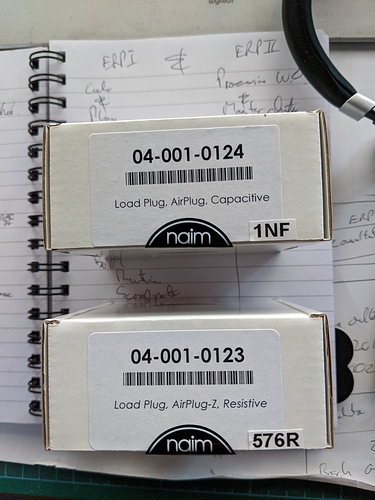 What was the wait time from order to delivery? I can get AVOptions here in the States to change out the resistor on the one that’s coming along with my SuperLine for $250 – deep-cryoed Z-foil 100 ohms.

I reckon it’s a good shout Bart. You can pick pre loved Superlines up for reasonable money and, cost-wise, it’s a reasonable bridge between the Aria and the Aura. Performance-wise I’d be interested to hear your thoughts. I know @Richard.Dane uses one with his RP10 (is that powered off the 552 Richard?) which is endorsement enough.

Had called Peter at Cymbiosis to check on values for my Krystal and he had the required ones in stock. Received them two days later.

I was reading Paul Messengers thoughts on the new Rega Aura vs. the Superline. Most interesting. And I read that one of his other references is the Pure Sound with the top AN step up. Just so happens I have the Pure Sound sat in its box here. I have a couple of step ups, including Pure Sounds own. But reckon I’ll need something better to make a fair comparison… hmmm…

I found that review online, thanks. At about a third of the cost of a new Aura, this SL should be fun to play with.

I’m a big fan of Rega stages with Rega cartridges Bart, but honestly, Naim’s best phonostage offering powered from your NAC552 has got to be pretty stupendous. Hoping it works out for you.

An RP10 would be a similar costs to the bargain Superline.

Interesting read, but must say its the opposite i found. I know we all hear things differently but on my system the aura nocked the naim for 6. I first heard the aura at hifi lounge on a nice 500 system when i got my rega P8 and it sounded wonderful, i could never never quite reach it at home, but that was when i didnt have my 500 system. Once i got my 500/552 and pmc fact 12 speakers, my system really oppened up and i found myself finding the superline was holding back my turntable. So after trying the aura at home i was shocked at the difference, just so much wider than the naim and so much more alive.
I know i am not the only one that feels the same as i know of atleast 6 other people that have done the exact same switch as me.
But the superline at £1000 to £1200 second hand is a great place to be, and it does work well, but really thats only the start as we all know. Once you start adding all the other bits you will feel you need to have then the costs go up and up.
Hiline or better, z foils, supercap, mains cable, extra shelf, you know how it goes. I feel naim need to revisit the superline and bring out a mk2 or 500 series, especially now that vinyl is having a massive come back.
But the rega decks are designed to work alongside the phono stages and its hard to better and if you have a RP10, P8 or P10 with apheta 2 or above then the auar is the go to i feel

Does the p10 or p8 still run its ground through one of the phono plugs rather than a separate wire? The Rega stages will be designed with this in mind, Naim still had the Aro when the Superline came out.

But the rega decks are designed to work alongside the phono stages and its hard to better and if you have a RP10, P8 or P10 with apheta 2 or above then the auar is the go to i feel

Except that PM is using a Rega Naiad…

An RP10 would be a similar costs to the bargain Superline.

No I’m paying about half of what I see the least expensive used RP-10 listed at.

@Bart, did you manage to try your mate’s Aura out over the weekend in comparison to your Superline / 552 combo?

Hi Dave - I picked it up yesterday, but there was too much commotion in the house, and I’m traveling for a day or so, so I really wont be able to have a listen until mid-week. Thanks for asking!