The 2008 vintage SL arrived. I connected it up, let it warm up for just 30 minutes, and summoned my wife for a listening test. She does have great ears, and she did not know which was which for the first listen through. I chose “So Far Away” from a 1st pressing of Brothers in Arms, because it was handy and it’s a nice clean first press.

She very quickly concluded that what was the SuperLine sounded better. The blind was then broken and we listened to more of that track and the first few minutes of Money for Nothing. We both heard the same things. Better sound stage depth, better separation among tracks. And overall, there was a ‘glare’ as I call it audible with the Aura but not with the SuperLine. It’s not an echo, or reverb…just the spaces between the notes and sounds were much more neutral with the SuperLine.

And the install was not optimal; the Superline is hanging off the top of the AC block on the brawn side of the Fraim; I will move it to the brain side to its own Fraim level; there is an empty one under my RP-8 at the moment.

Only after the test did I tell her that MSRP on the SL is about 3x the Aria. She was not surprised.

We’re keeping the SuperLine, and I will get AVOptions to re-do the AirPlug I inherited with it to the proper 100 ohm value. A $250 investment.

@Richard.Dane – the Rega RCA’s really are a tight fit onto the SuperLine! Should I re-insert the travel bolts before really tightening them down? I don’t want to press too hard against the floaty board; at least it seems like I shouldn’t.

The inputs are on the back panel rather than the board, so transit screws won’t achieve anything. 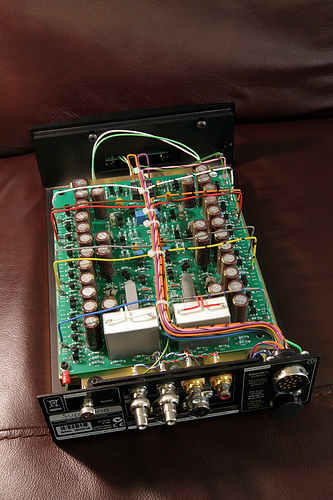 This is a bit weird since I have had the same feeling as Bart when connecting the IC cables.

Bart, I don’t bolt up before attaching the cables. Loosen off the collars fully before you connect them.

Bart, I don’t bolt up before attaching the cables. Loosen off the collars fully before you connect them.

Sorry something is getting lost in translation. The transit bolts are removed. Loosen off the collars – collars on the Rega RCA’s??

Yes, the RCA collars. There will be resistance from the WBTs but they should slide on gradually without too much force.

Thanks pal! And Happy New Year!

Happy new year Bart. You will discover again your lps collection.
As Dunc said, the phono stage is the most important amplification for vinyl replay.

The RCA Phono and BNC connectors are actually mounted on a separate panel that moves freely of the rear of the main chassis. They take advantage of the mass loaded suspended sub chassis.

Yes, once the collars are loosened, they do slide right on. Grippier once re-tightened in place. Maybe Rega includes instructions about this? I don’t know. But WBT’s website does; like many I suppose I was just trying to jam them on like run of the mill RCA’s.

Congrats on the new phono!
Not surprised with your results, the SL is a v good pre and well bought by you.
Now just get it properly loaded and enjoy…

Now just get it properly loaded and enjoy…

got the stock 100 ohm plug in, and already have in progress getting the deep-cryo version z-foil’ed Z-Plug.

Whether to invest in re-capping is next; this is much less of a bargain if I do. It’s from 2008.

Bart, glad to hear you are enjoying it, but no real surprise that you like it over the aria really.
See you are already looking at the load plugs and a service, see i told you, the slippery slop, it will be supercap and hiline next lol.

Any way enjoy it, dunc