I am starting this thread in the hope it will become a source for others. It’s all subjective, I have no training and no means of measuring or testing apart from adding, taking away and listening.
Recently there was discussion about support and isolation in the System Pictures thread and @RichardDane suggested the need for a separate thread which no-one has taken up and then there have been a number of separate queries regarding support and/or isolation, be it physical or electrical, since.
I am aware that the first recommendation for physical support is going to be Fraim, but there have been others used and recommended.
My journey started with a chipboard cabinet of unknown provenance and a wall frame for the LP12. That got changed to a Lack hack and then to Besta, both from that well-known hi-fi store Ikea. I played with spikes, ball bearings and nuts, wood cones, noting that what used to be oak cones are now from appearance beech, even turning my own from various hardwoods, various plastics and then using sorbothane.
Somehow, I moved to Atacama stands, but disliked the sound of glass. Which is when I found the Roy Gregory article in The Audio Beat about Ikea Aptillig butcher boards. Given that Atacama and Quadraspire were offering bamboo shelves and the explanations why a Booplinth works. I had to try and liked the result.
I had conversations about whether cutting pieces square was good and turning circles or cones might be better. I even tried to sweet-talk Quadraspire into selling me a piece of waste from a Booplinth to experiment from. I didn’t know what they were up to!
Then this chap Paulsurround popped up on the Linn forum (already using aptillig) extolling wrapping leads in aluminium foil, isolation on cork mats and cutting up Ikea Gunstig pot stand as an alternative to sorbothane.
I played, some work (FOR ME) and some didn’t.
Then, I have seen three separate demonstrations of Quadraspire Qplus. These discs harked back to my idea of turning bamboo, which I can assure you is hard work and prone to waste. I have always been lucky that my wife can hear differences, without being interested of wanting to know what or why and up to one point we have always agreed. At the minute I cannot afford it anyway, I prefer X-Reference, she prefers SVT. Anyhow for me, the Qplus works, a Rega Planar 8 moving from EVO to X-Reference and then adding Qplus Reference, it just gets better.
Lastly, at the last Bristol Show I saw more than one room using Chord Company Silent Mounts, on carpet. I’ve seen them before and thought they might work. Found a dealer with a less than list price offer so tried. I have for so long I cannot remember, used spikes onto concrete floor. Occasionally one of the Marley tiles crumbles so I have to make adjustments, but that has always been the best option. I was slightly sceptical because there is movement of the stands and hence speakers. For me, there is clarity, separation, vocals easier to distinguish than before. I think I know why. The speakers are on Something Solid stands which ring, vibration can clearly be felt when at normal listening levels. Stood on the Silent Mounts this is almost totally absent.
So, any thoughts? What do others prefer?

In my present home and having started 20+ years ago with Isobariks in a less than ideal, although dedicated, listening room, I have worked hard to get everything sounding as good as it possibly can. Some of that involved getting the electrics right (dedicated, multi-spur, 10mm etc.), which helped a great deal but I also set about optimising the stands/placement. Fraim really helped here, but it was the addition of Sonority platforms (designed and built to work with Fraim) that really made a difference. I now use a mixture of Sonority platforms for all the gear with the exception of the 552, which seems to prefer glass.

I also encountered Silent Mounts, having been urged to try some by Alan Gibb @ Chord, after he had first been introduced to them through Chord’s Japanese distributor. My reaction was “how much!!” for something that looked like a classier, better engineered Naim Chip, which I had been using. Turned out to be something of a bargain in the overall scheme of things. Your observations match my own and I’m using them on a Mexican tiled floor so floor surface seems irrelevant.

Both Sonority and Silent Mounts are well worth investigating, not least because they work with Fraim, taking it to a much higher level.

I recently purchased Quadrasphire sound stage to support the ND5xs2 streamer. Could someone indicate some links to read up and study the effects of bamboo on music compared to glass? Thank you.

Andrea, this part of the forum is " links".
Try Google or a search engine of your choice -
“Roy Gregory aptillig” returns TABLOG - the audio beat, that give you two links, one to the original article, the other an adaptation of Roy’s use of the boards.
“bamboo audio uses” will give you links to Quadraspire, a pdf document at researchdotnet and even an entry on the Lexus cars blog.
“Booplinth” gives many articles.
Happy reading

Are those Chord ‘Silent Mounts’ which ‘start from £350’? Hand crafted in Japan…

I can’t help thinking these prices border on ludicrous for bits of stainless steel.

AFAIK they’re made by hand, I know that they’re imported from Japan and are a two-part construction along the same lines as the Linn LP12 platter.

Several here have tried them and loved what they do and I’m one of them. They were certainly miles better than Naim Chips (which were vastly better than Linn Skeets) and, given what I’d already spent on things, a relative bargain.

Oh yes and they’re from £350, the titanium ones are even more

i just checked the price: 650 GBP for one shelf. I will read the hifi plus review. A bit expensive however.

Yeah and so expensive so impossible to mention the price to friends and family who are not audiophiles. They would think (correctly?) that I are more crazy than they thought. But the SM7 works for me.

By all means email me and I’ll tell you more about it (email in profile).

Be careful, the Quadraspire rack (in bamboo) is nicely balanced and blends a good organic sound with real solid dynamics, which is easily upset. I have messed about with glass/stainless balls before I got my Fraim and found that they just didn’t work that well, sounding quite hard and shouty. Beter to focus on how the racks contacts the floor. Like Naim chips if on wood or screw heads if on a suspended floor?

I tell you that the Quadrasphire Soundstage works very well … Satisfied. Try it and you will tell me …

There is some explanation in an article on the @cymbiosis website. As with any piece of equipment YMMV applies. All I know is that they work for me.
One test track where there is an absolute difference is Riptide by Laura Viers. We first heard the track at Chord demo, they probably had Silent Mounts, I cannot recall. We liked the album enough to buy it and the track gets played when trying changes. There are a couple of places where to our ears Ms Viers appears not to hit or hold a note. Introducing the Silent Mounts, the words became clearer, but I would now suggest it is breathing rather than tuning that we hear.
Yes, they are expensive, but everything is relative. I could not afford many of the systems I see here, or the cars, or the watches. I justify using these because I have for some time had a niggle that the speaker stands were detracting. An alternative set would probably cost the same as these metal discs.

AFAIK they’re made by hand, I know that they’re imported from Japan and are a two-part construction along the same lines as the Linn LP12 platter.

Several here have tried them and loved what they do and I’m one of them. They were certainly miles better than Naim Chips (which were vastly better than Linn Skeets) and, given what I’d already spent on things, a relative bargain.

Oh yes and they’re from £350, the titanium ones are even more

Thanks Dave - yes, quite likely a good upgrade in relative costs, but I think I’d want to demo them at this price point (I’m assuming £350+ is for a set of 4).

i wonder if someone has tried the hrs platform with naim components.
Or also the sonority, apart Dave of course. 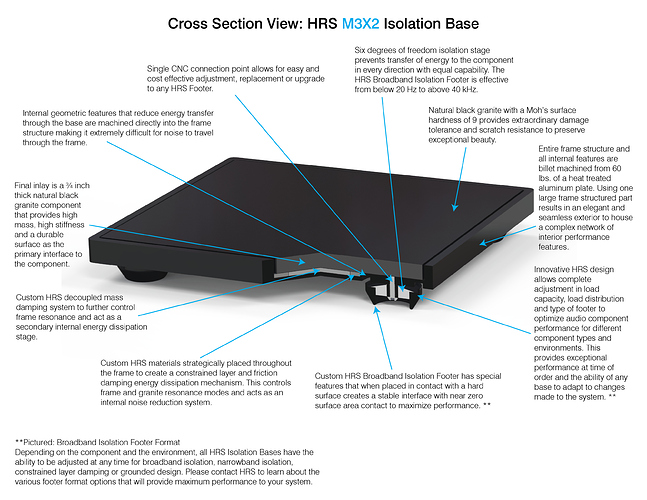 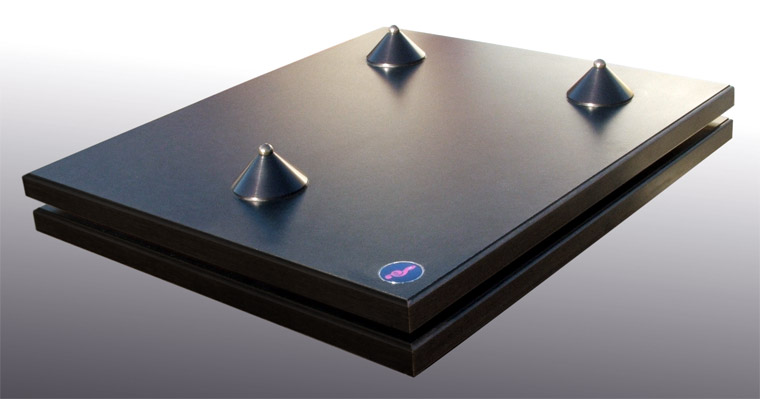 Yes, very much so.

A demo would be sensible although swapping back and forth can be a little challenging! I use them under speakers and Fraim, btw. Both benefit.