Can someone show me a photo of a suitable cable, or link to one on Amazon, please? I thought it was just a 3.5mm to 3.5mm one but I’m not sure anymore. 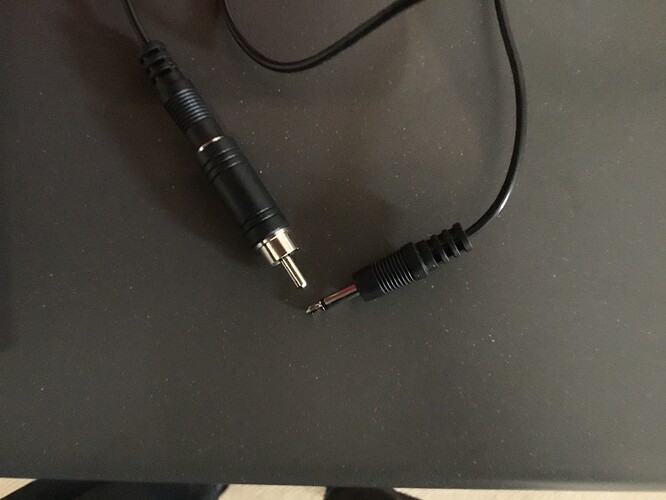 What Mike said and jsaudio posted. Also the manual,

I’d looked through that document and completely missed the part about the cable!

Mine was from an online retailer called Kenable, either direct from their website or via eBay, cost about 65 pence, available in a choice of lengths to make cable dressing easier. It’s the 3.5mm jack to single RCA version which is what you need for a separate preamp.

(It’s the integrated amps that use 3.5mm jacks both ends.)

The manual. For an NDX. Which tells us you’ll need this lead. Or that one. And then guides us on how to connect a streamer to a preamp, which turns out to be an integrated amp. With no clues about which lead would be the right one for that permutation.

That pdf is old hat, but was all I could find the other day. Luckily people ask the question on here and I was able to deduce that an ND555 into a 252 would need 3.5mm to RCA. But where to plug it in? The guide isn’t much help… I could guess, but tbh having a stab at where to connect a 13 grand streamer to an 8 grand preamp isn’t the best thing to guess at. Thanks Naim. Good job the phrase ‘more money than sense’ isn’t set in stone in UK law, my guess worked.

How difficult would it be to update the guidance, and make it readily available on the main site? Those who are in love with Naim and can never see any fault with their beloved will disagree. The rest of us just think “that’s one more step away”

The manual is old and it’s a shame, but it tells you that all you need is a bog standard cable with 3.5 and RCA jacks and that it can be stereo or mono. It also tells you that the magic word is RC5. That’s still helpful. On the connection side, nothing changes since the NDX. The setup in the software did change, but the OP was not asking about that.

I agree it should be updated and for the money spent one can expect that it is, and more easy to find too. On the other hand, things that are child’s play to find get asked as well, anyway.

The dealer who sold the Naim stuff should have sorted this as well, but there was a recent thread where someone’s dealer made a right bodge job out of it, sadly, which should not happen with a Naim dealer.

Whether one needs a 3.5 or RCA, or one and the other on either end, is clarified, I believe, by simply looking at the plugs at the back of the units. These are labeled RC5 (I hope this is consistent), which is helpful if you are armed with the knowledge from the manual even if it’s outdated. The manuals that come with the units also tell you.

Finally, I and everybody else kept the answer short because the same question was asked and answered several times in the past month alone, including by me. This is the second time I have been accused recently that the time I spent to try and help someone was not enough and I should have spent more time to spell it out instead of providing pointers to existing information. Not by the people I had helped mind you, but by drive by snipers after the fact. Not sure what benefit this has for anyone except the sniper. Next time feel free to be faster and spend your own time to help instead of criticizing others for theirs. Thank you.

I set up my system automation purely through trial and - amazingly none in this case - error. An up to date, clear and simple, easily accessible guide would be a really good idea. There are some oddities of the automation - like how the app won’t switch sources if you’ve previously switched with the remote or buttons, until you repeat the manual selection on the app - they had me foxed until someone on here explained it.

Of course, in an ideal world the dealer would do it all. But that doesn’t help if you decide to set it up yourself subsequently.

My NDX2 and SN3 have 3.5mm plugs for SA. One is called ‘IR out’ and the other ‘Remote in’. Even here on two very recent products it’s not totally consistent. If IR was written as remote it would be more helpful. It’s a tiny thing, but does everyone realised that IR means, presumably, infrared? And then the NDX2 and ND555 use zigbee…

I’ve spent a huge £1.60 on a cable - purely by chance it’s a Kenable like ChrisSU’s. The joys of set-up and subsequent foibles are all to come - probably at some point after Christmas when it drops through the letter box.

Thanks everyone for your help.

If I can do it, anyone can. Just turn it on in the app and it’s all pretty obvious. One on, all your preamp inputs become available in the app, called preamp 1, 2, 3 etc. Just go to the input settings screen, rename those you want to access via automation, and turn off the rest.

It really is very clever and incredibly easy to use. Just remember what I wrote above if you use the preamp remote to switch and then wonder why the app won’t do it.

My wire was £1.49. It’s really short so that it doesn’t dangle about and look untidy.

One is called ‘IR out’ and the other ‘Remote in’

OK that’s ridiculous really. I should have known about the NDX2 but never looked at the label. I see now that the quick start guide calls it “remote output” and adds a picture of a remote. Not helpful at all to make it inconsistent with the print on the back and not explain.

And now I also remember that someone asked a few days ago if they could plug an IR receiver into the “remote in” on a cd5xs and I understand why one would be confused.

The system is RC-5, its a Philips IR (infrared) remote control communication protocol for consumer electronics.

All now set up and working as expected. One further question, though.

In the app settings under System Automation, there an option for RC5 Modulation. What is this and should I have it on or off?

Tap the ? in the top right of System Automation to expand each heading with a bit of explanatory text.

Thanks, don’t know why pressing the ‘Help’ icon didn’t cross my mind!

Mrs B. was watching TV (with the sound through the system) and I was trying to listen to the streamer through my headline. Of course, as soon as I selected something to play in the app, it switched the input away from the TV. The only solution was to manually switch back to the TV input.

Don’t think there’s a neat way round this. Anyone have any suggestions?

Hmmm, sounds like you only have one system, and what you need is two!

I have Naim stuff in four rooms, but the other three can’t compete with the main one in terms of quality - and it’s still vaguely social to sit in the same room