I can only second that. I’m now a bit past the halfway point (just finished the episode dedicated to Opus 31 no.2, Tempest or Sturm in German). Pure joy to listen to, with lots insightful explanation, hilarious banter and many examples of later works by Beethoven and other composers whose work is foreshadowed by these sonatas. Great way of passing the time whilst on my daily commute. The podcast is called 32xBeethoven and can be found on the major podcast platforms.

New streamer and I’m rediscovering my music collection. Had a lovely evening listening to my favourite opera in, perhaps, it’s finest version. 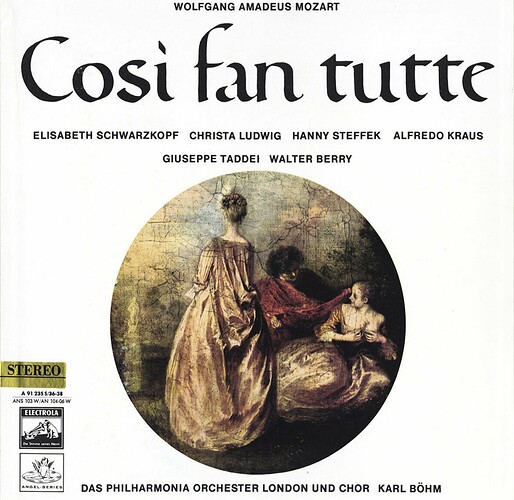 Had not appreciated before how much Walter Legge’s choice of an intimate, appropriately domestic, sound stage added to this lovely recording.

Seeing that prompted me to put this on, which made my wife think that the expected sad news from Balmoral Castle had indeed arrived.

That EMI recording of ‘Cosi Fan Tutte’ is justifiably famous: what a fabulous cast the recording’s producer Walter Legge (Schwarzkopf’s husband) was able to put together. I doubt whether a better cast could have been put together at the time.

It was also the only recording that Karl Böhm made for EMI: he recorded for the Polygram group (DG, Philips and Decca) otherwise. There must be a story behind Legge’s capture of Böhm for that single opera, but I’ve never heard it.

I have the set on three lovely LPs, which I must play soon.

I’m far from Schwarzkopf’s No 1 fan, but I think she’s perfectly cast as the rather stiff Fiordiligi but above all it’s the ensemble work that is so special. The sextet at the end Act 1 has me on the edge of my seat every time.

I also love the opera for it’s sophistication. Mozart and da Ponte wrote the perfect example of opera buffa, whilst simultaneously sending the genre up. But Mozart’s music is completely true to the emotional hearts of the characters and has me near to tears in many places.

Try Sir Neville Mariner’s version with the Academy. Thomas Allen at his best once again. Splendid!

Schwarzkopf seems to divide listeners into two camps, those (such as my late mother) who adored her, and those who find her too coy, too arch.

I love her singing in the great Mozart operas and in Richard Strauss (especially in 'Rosenkavalier under von Karajan and the ‘Four Last Songs’ under Szell). And she was divine (and downright sexy) in ‘The Merry Widow’ under Lovro von Matacic (although she may have been outsung on that recording by Eberhard Wæchter). 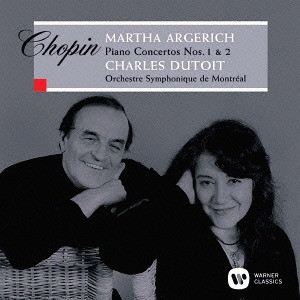 Returning to this after many years, I still feel this is an OK performance of the Chopin concertos, if you like them unsentimental and fast, but it doesn’t really take wing. Argerich’s playing is somewhat staid, her rubato calculated and dutiful rather than spontaneous, and Dutoit follows without taking the initiative. The sound engineering doesn’t help either of them.

Seemed appropriate for this evening’s listening: 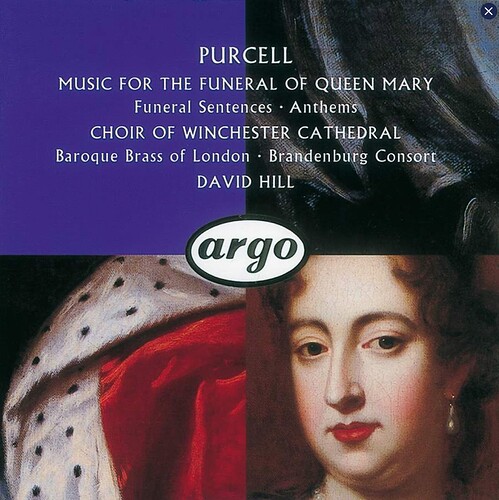 Hello, EJS, do you have Maurizio Pollini’s early EMI recording of Chopin’s First, made shortly after he won the Warsaw Prize in 1960? He made that record, plus another of Chopin solo piano pieces (also for EMI), before going off for a seven year (if memory serves me right) sabbatical, spent studying with the great Arturo Benedetti Michelangeli. Both pianists were then signed to DGG’s roster.

Those two early EMI Pollini recordings are superb. He was a much more reserved player when his DGG recordings started to emerge (rather like Michelangeli, who was often described as ‘cold’, in that respect).

I think that I have virtually all Pollini’s records on LP or CD. Ill health forced him to give up public performance some years back, but he would get my vote as Greatest Living Pianist.

Pollini’s #1 for me, too - and although he is in his 80s now, still active on the podium! I think I own all his recordings except for this first concerto recording with Kletzki, and some smaller works also by Chopin he recorded for EMI in 1968, just prior to his move to DG.

I inherited a huge collection from my late parents who were musicians and all of it on records. The best labels IMHO for quality pressings and mastering are from Deutsche Grammophon, Reader’s Digest (they turned out some great box sets), and Decca. Classical recordings are in general cheap to buy on the secondhand market, I pick most of mine up on eBay adhering to the usual grading to select the best. I have a fondness for Baroque, Piano/Organ works and Chamber Music in the main. In terms of concerts, I’ve generally found it necessary to go to London to hear/see anything on a larger scale but avoid the RAH as the acoustics aren’t really upto say, the Barbican and RFH. Occasionally, my local town hall will put on some ensembles which are nice to attend.

Sadly, London doesn’t have a really good concert hall. The Royal Albert Hall is just a huge round pit, the Royal Festival Hall has pretty dreadful acoustics (despite the ‘flying saucers’ hanging from the ceiling which were supposed to improve the sound), and the Barbican is very dry, despite all the London Symphony Orchestra have done under Rattle to improve things.

There was a big attempt over twenty years ago to find a site for, and build, a new concert hall for London as part of a Millennium Project, but neither the site nor the money was found.

Symphony Hall in Birmingham is generally thought to be the best concert hall in the UK, and Sir Simon and the lovely Mirga have made good sounds there with the CBSO.

I hope that something can be done in my lifetime. If the Germans can build a beautiful (visually and sonically) new hall in Hamburg, we ought to be able to match them in London.

Fortunately, the lack of a good concert hall hasn’t stopped some of the world’s greatest musicians from visiting, and I count myself very lucky indeed to have seen Carlos Kleiber, Maurizio Pollini and Emil Gilels in London. (The Gilels evening was particularly memorable, as it took place on the day that the SAS took out the terrorists occupying the Iranian Embassy, telling terrorists around the world not to f**k with the Brits.)

For chamber music and the like, the Wigmore Hall in London is pretty good, but you need to be not too far back in my experience. Being close enough to be able to see the artists’ faces as they hand the melody back and forth between them is a real joy. (I am thinking of Schubert’s Arpeggione in particular, where we were about five rows back from the front, and in the centre.) 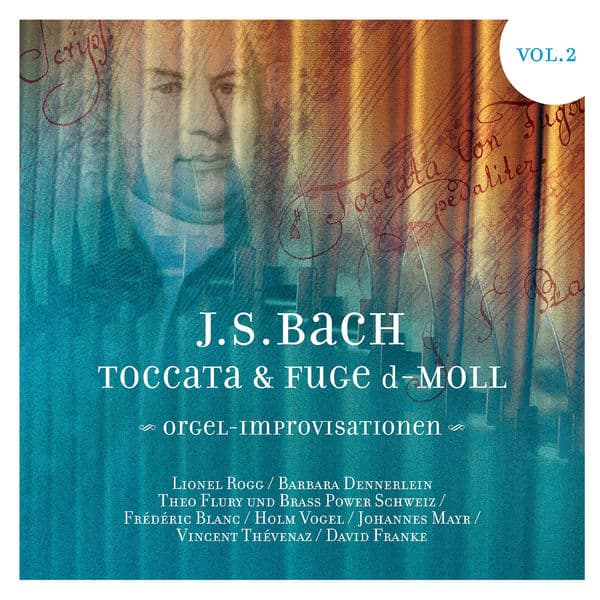 This is a great recording. In the world of organists, improvisation is a high and required art. To complete a study, the candidate must show the ability to improvise on a given theme.

Not that long ago classical music had a much higher profile with government, schools (funding?) and the BBC, apart from the Proms and BBC TV4.
Now its not on the agenda for a lot of people: neither is hi-fi as well.
Contrast that with the attitude in Germany and Austria where classical music is seen as a nuch more important part of life.

I love Baroque so Bach’s a firm fave of mine - I’ll dig this out. At the risk of public ridicule and being metaphorically pelted by rotting fruit, I also enjoy Sky’s interpretation of this work too. John Williams et al did I think a great crossover version.

If I remember correctly Sky’s version is the arrangement written for the film Rollerball.

That could be because Austria and Germany produced the world’s greatest classical composers, whereas the UK (long before it became the UK) produced great poets and playwrights.

I have no idea why that should be.

“That could be because Austria and Germany produced the world’s greatest classical composers, whereas the UK (long before it became the UK) produced great poets and playwrights”.

Undeniably true but we still have some heavyweights such as Elgar, Britten, Vaughan-Williams, Holst, Delius, Tallis, Purcell, Byrd and Taverner so lord alone only knows why we lag behind Germany. I’d include Handel but I’m not totally sure if he counts…