Seen a lot of Love for this album over on the What You Listening To…… thread. Thought this might be of interest. 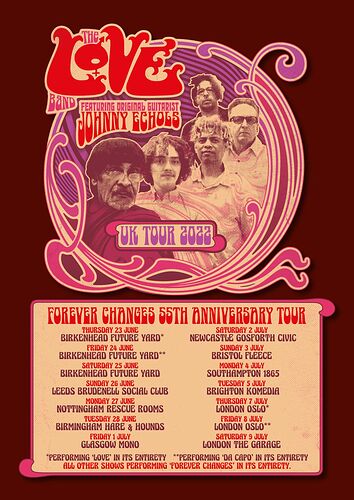 Unfortunately three of the original members are dead so it’s just a case of the surviving member cashing in on the “bands brand name” . I’ll just have the memories and enjoy the original album!

The Forever Changes concert with Arthur Lee (as nervous as a dog on ice, he said) and Baby Lemonade was unbeatable. That moment when the brass kicks in on Alone Again Or was almost orgasmic.

Hard to disagree. Also saw him with Shack and that was even better. This though? Hmm.

Saw Arthur Lee with Baby Lemonade several times and they were excellent and when they had the strings and brass with them they were indeed orgasmic.
I’ll be there as it’ll be better than most stuff going around. Some bands transcend the “tribute” level - The Muffin Men (Zappa) and the Magic Band (Beefheart) spring to mind. With the main men dead they are the only game in town and live music is live music!

No Arthur Lee no go.

Also saw him several times after that backed by Baby Lemonade and each time they were brilliant.
I even got to shake the great man’s hand after a gig at The Borderline in London.
I had tickets to see them at I think it was Islington Academy with Johnny Echols. When I got to the venue we were told Arthur wouldn’t be playing so it was the band with Johnny Echols. We were offered a refund or entry. I took a refund and returned to the pub.

This is Baby Lemonade, without whom Arthur would never have managed to recover his career IMHO, plus Johnny Echols. I’ve seen this lineup before and as you would expect after touring with Arthur for years they are note perfect, well worth seeing.

I missed the pleasure of Arthur Lee and Love live.
I’ve nothing against seeing Johnny Echols & BL play the songs.

My memory of times/dates differs.

I went to a Love/Borderline gig straight from the office.

I think I was the only person in that tiny club wearing a three-piece suit. I did loosen my tie, though.

As I remember, they played the Forever Changes album music in full, as a warm-up for their Festival Hall concert a few days later, which was then released on CD.

I didn’t get to shake Arthur’s hand, though.

I think that must have been a different gig. The first time I ever saw Love play was at the Royal Festival Hall at The Forever Changes concert.
The Borderline gig was after that definitely. My memory is also a little vague but I think they were billed as The Andmoreagains. It was a warm up for their Glastonbury appearance. I also seem to remember England were playing & lost to Portugal in the football on the same night.
It was a cracking gig I was right at the front and was lucky enough to shake his hand afterwards.
Won’t ever forget it.

Actually, I think that you may be right, in that the warm up may have been for their Glasto show, rather than the RFH appearance.

So did Love come to the UK more than once after Arthur Lee’s jail time - once with Arthur Lee fronting at Glasto, and once with Johnny Echols at the Festival Hall?

Someone out there will know, and may even enlighten us with a response here.

That sounds right to me.

Ok Graham. You got me curious so I did some searching. Problem is I have been to so many gigs over the years my memory gets very hazy!
There is a great website for Love stuff. If you search Love Torbenskott you will find it.
I never got to see Johnny Echols play with Love. The gigs I attended were firstly Forever Changes at Royal Festival Hall in Jan 2003.
Then I saw them billed as The Andmoreagains at The Scala Kings Cross in March 2003.
In 2004 I saw them at Forum Kentish Town & then at Borderline gig we were discussing.
I had tickets for 2005 tour with Johnny Echols at Carlin’s Academy Islington. Sadly when we got to the gig we were told Arthur Lee wasn’t playing so it was just the band with Johnny Echols.
I took a refund and went back to the pub. In hindsight maybe I should have gone but I was pretty disappointed at the time.
I think Arthur Lee was quite ill in 2005. He was on the early part of the tour but skipped the latter part to return back to USA.

In 2002 Arthur and Baby Lemonade played London’s Queen Elizabeth Hall and announced from the stage that they would return in 2003 with a full “Forever Changes” tour complete with strings and horns the following year and of course they did, this time playing the Royal Festival Hall. They played there twice first with guest guitarist Graham Coxon and secondly Robyn Hitchcock, with Arthur getting both of their names wrong introducing RH as Alfred Hitchcock! Great gigs! The JE tour was later at much smaller venues.