The Morse System - Did Anyone?

Some guys will remember the episode of Inspector Morse when his cottage was set fire and there were images of his system which was an original Roksan Xerxes, Nait 1 and I think Linn Kans(?).

Did anyone ever have an identical system or even better still have? @Polarbear had an early Xerxes but I think with a Naim pre/power.

If I had room for a 2nd system I’d be very tempted to seek out the components to recreate. 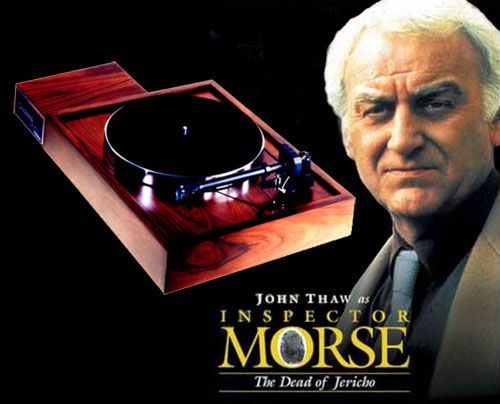 I had a very early Xerxes/RB300/K9 into Nait 1 into Epos ES14s, so pretty close.
The Nait was traded in against a 62/140 and then up the olive range to 82/HC/135s (82HC replaced after 25 years with a 52/SC), the Xerxes picked up Artemiz/Shiraz, then Artaxerxes head amp, then was traded in for a TMS (which I still have). The ES14s lasted until an electrical spike took out a 135 and a bass cone of one of the speakers in about 2007, the 135 went to Salisbury for some major surgery while the ES14s were replaced by the B&W804S I still have.

Like @Eoink i had the original Roksan with RB300, but can’t remember what the cartridge was. My preamp was a 32 I think with a 250 into Linn Kans.

Sadly the platter warped whilst I was abroad and in the custody of my brother. I looked at having it serviced but was advised it was not worth it so I bought a 2nd hand LP12.

My first system was a Roksan Xerxes with an RB300 and and Audio Technica F5, a 32.5/140 (no HiCap), and Kan Is, bought from the Sound Organisation in Southwark in 1988. I wish I could wax nostalgic about how magical it was, but it was the opposite. I remember it as a thin, hard, bright sound, very unengaging and fatiguing. Six weeks of break-in and tweaking didn’t help, and I eventually stopped listening entirely. Later that year I replaced the Roksan & RB300 with an LP12 and Ittok, and my ears thanked me.

I had made the beginner’s mistake of prioritising my concerns about the hassles of keeping the LP12 in tune and downplaying the sound quality differences, which were clear to me, believing that either source would be vastly better than anything I had heard before.

My memory may be playing tricks with me, but I seem to recall that there was an episode of ‘Morse’, in which there were murky goings on at a family-owned high end turntable manufacturer, and that Morse had one of their turntables (maybe a Roksan?).

Yep. The episode ‘The Dead of Jericho’ - Richards Audio Research was the ‘manufacturer’

I have all the constituent parts, original Xerxes, NAIT and Kans but never played them together as a system…

Interesting that Colin Dexter should be so interested in music and music replay systems, as he was profoundly deaf - at least in his later years.

The Morse novels are great books, very well written and rather more nuanced than the TV series (which had to concertina all the events into under two-hour time spans).

My first system was a Roksan Xerxes with an RB300 and and Audio Technica F5, a 32.5/140 (no HiCap), and Kan Is, bought from the Sound Organisation in Southwark in 1988. I wish I could wax nostalgic about how magical it was, but it was the opposite. I remember it as a thin, hard, bright sound, very unengaging and fatiguing. Six weeks of break-in and tweaking didn’t help, and I eventually stopped listening entirely. Later that year I replaced the Roksan & RB300 with an LP12 and Ittok, and my ears thanked me.

Funny how things can be different. In 2009 when I compared the Xerxes/Artemiz I thought an Akkurate level LP12 flat and uninvolving in comparison.

Thanks guys for your contributions. Good fun.

but never played them together as a system…

The Xerxes PSU is in need of a new power cable (I removed the old one as it was looking pretty manky - possibly dangerous) and that will mean soldering. One of many jobs way down the list of priorities at the moment…

I haven’t heard any Roksan turntable in 30 years, but given how the LP12 has changed and evolved over the years, I wouldn’t be at all surprised if I did the comparison later and had a different reaction.

I’m also reminded of how Linn’s analogue products went through what I perceive in hindsight as a blah period during the mid to late 90s and early 2000s. For a time I was tempted to jump ship (or at least consider it), but since around the time the Keel was introduced (late 2006) they seem to have got their groove back.

I had a system in the spirt of this. Xerxes - 42/HiCap/250 into small JC1 speakers which were later made by Ion systems. All the Kans benefits without the pitfalls.

The Xerxes replaced an LP12/Ittok/Karma. At the time I felt the Xerxes was more resolving and had a far more musical and faster bass. It made the LP12 sound like it was running slow, there was so much more pace and energy to the Xerxes.

I remember hearing the Xerxes when it was launched at the Heathrow Penta show. It was demonstrated by Touraj and was literally slotted into a Linn Naim system, including the Ittok arm and I assume a Linn cartridge. It created quite a stir as nothing came close to the LP12 at the time and the Xerxes was taking on the Linn musically which others hadn’t been able to manage before.

I still have the Xerxes but it’s currently not in use as my system has grown and there isn’t the space in my current arrangement. I used it for many years with a Rega arm and an AT OC9 cartridge. More recently I swapped the OC9 for a Corus Black cartridge which improved things albeit at a loss of resolution. I found that the OC9 could be a bit relentless and bright, whereas the Corus Black is more balanced even if it’s a bit less resolving.

It’s in lovely condition, albeit with some plinth sag that has been addressed with a shim kit. Mine also has the upgraded bearing and platter.

I also have a friend who has one with a rega arm and Goldring MC cartridge which is used with a 62/160 and JC1 speakers. Still sounds great.

Here it is in my system before it grew and was mothballed to make way for the NDS/555DR, Supercap and NAP 300DR… 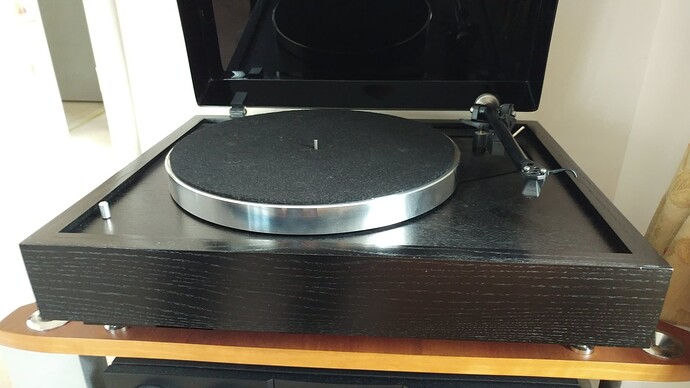 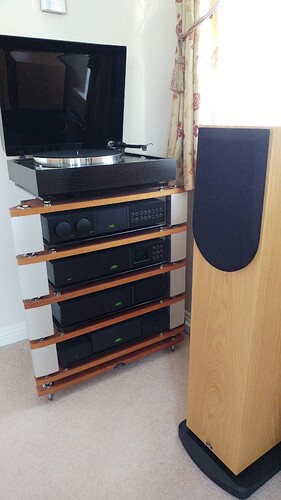 Very nice TD. It looks just like a twin of my own Xerxes. The Rega arms suit it very well.

Good stuff Dickie, thanks. Not sure I agree that nothing went close to the Linn though. Went to a demo 84 ish of Linn/Ittok/Asaka vs Michell Focus/Mayware/Audio Tech (can’t recall which), views were divided inevitably but many including me thought the latter comfortably ahead. But it’s all good!

The plinth looks as if you could drop an LP12 in. Are the dimensions the same?

The Xerxes is a bit bigger than the Sondek.

Naim was firmly in the olive series when I discovered them in the 90s but I always liked the looks of those old chrome bumper Naits. Does Naim still service the old boxes?