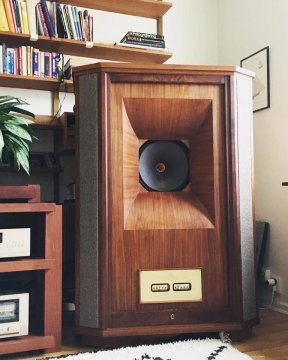 Do you know what the oldest loudspeaker company in the world is.?

If you guessed Tannoy you’re exactly right,.as Tannoy was founded by Guy R. Fountain in 1926,and has been making loudspeakers now for over 84 years.
‘Tannoy’ was trademarked as a name in 1928,.and was located in London until 1975,when it relocated to Coatbridge,Scotland,.where it still resides.

These classic loudspeakers appeared second hand,.for sale today on a Swedish “sales page”.
These are big, classic, mythical and expensive.

Is there anyone here who has had the opportunity to listen to these Westminster Royal SE.?
I enclose a non-commercial link describing these unique speakers,.there are lots of images and text,an incredibly interesting writing about these rare speakers.

I once heard them by chance in a massive room in a guys house who i’d visited to buy his LP12, some 15 years ago. I sat 30-35 feet away on a big leather sofa whilst he demonstrated the LP12 into a low watt Icon Audio valve amp that cost around £1500 and a pair of Tannoy Westminster SE with super tweeter. The speakers were in the far corners of the room and were huge. He played me his party piece which was a very good recording onto vinyl of a marching band, so not exactly music. Dynamically it was like being in front of the real band, as it quite literally blew my ears off, somewhat like the old Maxwell tape adverts of old. I have no idea if they played music well as we didn’t get round to that as i just bought his LP12 and left. What i can say is i’ve never forgotten the room, the speakers and the incredible noise they made from a 15 watt valve amp.

I first heard them around 20 years ago at a large old classic country house, Not 100% sure of the actual model, but it was one of the Royal type with the curved cabinet around the drive unit. They were located in a very large room that was going to be used for a wedding evening entertainment. In the short time I heard them they sounded superb. I wouldn’t say anything was outstanding other than simply so natural. The owner played a few tracks of Dizzy Gillespie & it was as live as I’ve ever heard from a recording. They sounded the same at whatever volume we played. However it was just a quick listen as I was there helping set up the room for the band.
Second time I heard a pair was about 2, maybe more, years ago in a London bar that always has a a good music system. The Westminster’s were installed (on loan) for a limited period & a lot of people made a visit just to hear them. There was a thread about the venue on the old forum. Despite the room being packed & my position not being ideal, they still sounded superb.

My uncle owned a pair in Cheltenham. Only ever got to hear Welsh oratorios, make voice choirs etc. but my goodness they were something. It’s a long time since I’ve hear them but my abiding memory was if hearing s room for the first time. Really hearing a room. Understanding different creaks; location etc.

I’ve only heard an old version, plain Westminster, not Royal, in a tiny junk shop in Hong Kong, where they were just playing background music.

They have been one of my “dream” loudspeakers since I first read a review probably over 30 years ago, and about 5 years ago I saw a pair advertised for sale at a remarkably low price, and was tempted - until I used a tape measure to assess how they would physically fit in my room! They are huge!

I believe there is or was a bar in London that uses a pair - I guess it may be the same place Mike-B mentioned.

Loads of times. In fact there seems to be a pair on sale in just about every audio show room in Tokyo.

I’ve never heard them setup right in a controlled environment though so they always sounded naff.

Id love a pair…oh and the room to accompany them.

We had a pair in the shop when I worked in retail on Tottenham Court Rd in the early nineties.

They sounded good with a Musical Fidelity A1 but I don’t remember being blown away. I can’t remember what any of the sources were. I was more of a Linn/ Exposure/ Kans kind of guy.

My most recent experience with the Westminsters was hearing a pair at a small event, with amps that I can’t recall mainly because I was mesmerised by the lovely Simon Yorke turntable that fronted the system. Unfortunately, the sound was a big disappointment so I can only assume that something somewhere was broken.

Speaking of Tannoys, many years ago I was contacted by a local lady who wanted to sell her late husband’s record collection. I said I might be interested but I would be happy to take a look and give her an idea of what was what. He had a few hundred LPs, mostly classical, but with many '50s and '60s EMI and Decca gems. They were obviously played but well looked after. There was a pristine looking Thorens/SME turntable. I told her what I thought it was all worth if she wanted to sell to a dealer. She asked if I was interested, which I was, and we came to a figure I could just about afford.

As I was carrying out the LPs to the car, she stopped me and said, “oh, I almost forgot, could you come and look at these speakers we have in the barn and tell me what you think”. So I opened the big barn door and there inside, under lots of dust were rows and rows of wooden boxes. She then went on to tell me that her husband was with Cunard and when the Queen Elizabeth was refitted there were loads of speakers going spare and so rather than see them scrapped, he decided to store them at home. A look at the backs and sure enough they were old Tannoys. I realised that there was a strong market for the drivers and, seeing that there were so many of them, I told her that I would ask a well known dealer if they might be interested. I kick myself now though, as I should have made her an offer there and then. Despite assurances to the contrary, I don’t think the dealer gave her anything like the price they warranted, which was a real shame, as I know he sold a lot on to the far east. But that sight, opening the old barn door was something I’ll never forget. Rows and rows of old Tannoys sleeping under the dust…

Hi, I heard the “standard” early model of these loudspeakers, back at the beginning of the '80s and I had the same impressions and feeling as Mike-B described.
It’s still today one of those few (4/5) really exceptional memories of my hifi journey.
It was at one of the old SIM fair in Milano, a far from ideal location and placement but the listening session left no doubt about the class of the Westminster.
Still remember the beauty of that deep tight bass lines heading straight to your stomach rather than the ears. Never heard the Royal but I think that if I could afford the old standard version I wouldn’t care for an upgrade.

That’s really interesting. My late uncle was the purser on the Queen Mary and then both Elizabeths. On the refit of the very ship you describe he acquired multiple pairs of speakers which were largely sold on for minimal gain. Had I known what I know now…

Fascinating stuff Mike. I recall her telling me that the entire ship had tannoys fitted throughout so there must have been a lot of them! Certainly the barn had at least 20, maybe 30, that I could see, and likely more hidden from view.

The Swedish seller has not written any prize in the advertisement.

He just write what they can be worth second hand as above.
This is the first time I see these speakers for sale second hand in Sweden,.so in all cases,here they are rare.

• It’s hard to see at the picture,.but I think it looks like he’s running with Accuphase electronics.

What has been used for these speakers when you have listened to them.?

What has been used for these speakers when you have listened to them.?

Hi Peder, good question…if I am not wrong, it was 1981/1982 and at the time the Italian importer of Tannoy was Gaudi that since years was also importing SANSUI, still very famous and renowned brand back then. I am quite sure it was some top of the line Sansui.

Also consider that at the beginning of the '80s the tube fashion/hype was still to come so that the trend for mass market was powerful amps with high slew rate and that’s it.

I personally think that a pair Westminster would also sound very good with a class-D amp, just feed them with high quality stuff, that for sure.

Our family did have various documents from my Uncle Jack’s travels and I recall amongst them he had contractual documents from Tannoy. No idea what happened to them.

Quite staggering to see them once again in a domestic scenario. My uncle’s lounge was split level so you came up maybe 7 or 8 stairs to be greeted by these boxes turned partly away from you either side of the steps and so large they felt initially like they were part of the walls.

I’ve honestly struggled to listen to similar music since as I’ve found little to match the scale and atmosphere.

Lovely speakers if you have the room and matching decor.

I recall that there was a HiFi mag review of the Chord Mojo and seeing as they had a pair of Westminsters in for review at the same time they powered the Westminster from the Mojo. I don’t suppose it raised the roof but it demonstrates an extreme case.

I believe there is or was a bar in London that uses a pair - I guess it may be the same place Mike-B mentioned.

Good point. Do you know which pub?

It was the Merchants Tavern in London run by Spiritland. Have since branched out into greater things. Google Spiritland and it should come up.

Thanks for that, Toby. As far as I see no Tannoys anymore. Is the place worth visiting?