Those genesis remixes are a breath of fresh air

the later box is less of a revelation but davis and crew did a great job on these,
everything is more present and clear especially bass and drums

I’ve also got the 70-75 set which I really like. Wish I’d bought the other two sets when they were first released.

Nick Davis’s bowdlerization of the Colony of Slippermen is unforgivable, as is what sounds like the use of a different take for the fade-out of Supper’s Ready.

i give Davies some creative leeway on this unbelievable undertaking and compared to what most bands have done with their back catalog; this is by far the most worthwhile endeavor i’ve seen

I’d bought most of my favourite Genesis albums in the remix version on vinyl, just because of the wear and multiple styluses used on my ‘in period’ originals. The biggest change I noticed was the bass guitar work, but I’m also getting more of the skin of the drum, so I like them. I’d avoided the Lamb because I’d never been its biggest fan, but recently took the plunge, and went into HMV and bought the CD, because my CD player has been singing beautifully recently. This has in fact changed my view of the album. It’s really very good. At the same time I bought some live albums by both Genesis and Yes, and the more recent mixes do bring out more of the music so I’m a fan.

i completely agree, i’m hearing Mike’s bass work for the first time
(except his bass pedals) and also hearing phil’s drums especially his hi-hat work
on the new mixes much better

On the Lamb, I think I’m hearing pedal work on Disc 2.

i also like the harder edge in the davis mixes, they sound more like they did live

Also just got ‘The Lost Radio Recordings’ on CD, which sounds pretty good for a 50 year old set of sessions.

this one? but the cd version of course…

i consider myself pretty knowledgeable in all things genesis but
i don’t think i’ve ever heard of the first three songs, unless they’re covers or working titles of other tunes

They are in the 1970-75 box set as extra tracks, but I believe were done in 1970 for the BBC sessions. I’d not heard them before but you could easily see them as part of those early albums. 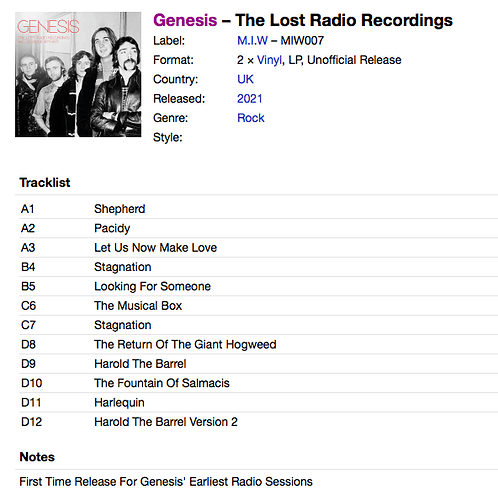 is this the one?