Sound wise on MY system I prefer QOBUZ.

In TIDAL on both iOS and Desktop App (and in Naim App), that album is only showing as Master (ie MQA).

It shows as MQA FLAC 96K Stereo 24B when played on an MQA-capable streamer. Let’s hope my 10% artist payout doesn’t go the way @Naim.Marketing’s goes (i.e. to Ms. Swift).

I obviously realise it will be different on an MQA device; I’m just trying to test the claims about non-MQA high-res

I have an NDS. I assume the legacy streamers will play the 1411 Tidal HiFi files?
I’ve been listening this morning and it seems to sound very good to these ol’ ears.
I haven’t done the update yet, but will do soon.

A lot has been said already in response to my first post opening this thread. Suffice to say, the difference between Tidal HiFi Plus and Tidal HiFi is more than just “to MQA or not to MQA”, although to some that seems to be the only thing that matters. And indeed, if all you do is listen to Tidal on your Naim streamer, and have no interest in the other extras that Plus brings, you get CD quality at half the price when going for Tidal HiFi.

360 Reality Audio may be the next quadraphonics (going the way of the dodo), or it may become more. I have one of these Sony headphones where you get to scan&analyse yours ears for optimum 360° reproduction. So when playing on my phone through those headphones, that is an added bonus. It’s OK I guess, but I’d hardly call it Tidal’s USP.

The payments/royalties move is the real surprise to me. We’d have to see in practice what this will bring, whether it will still favour the already-too-popular artists or if indeed lesser known acts get a bigger piece of the pie. I’m willing to withhold judg(e)ment for now.

But at nine ninety-nine, Tidal HiFi has surely thrown down the gauntlet for the much awaited Spotify HiFi. That game is on…

I obviously realise it will be different on an MQA device; I’m just trying to test the claims about non-MQA high-res

It was merely meant as some extra info on that particular album. @Mike_S’ screenshot showed it as FLAC 48kHz 24bit, MQA 96kHz, which confused me a little. Anyhow, 96K is still half the 192K that Qobuz offer. Only blind tests will tell which sounds ‘better’ (if one hears the difference at all). I’m certainly not volunteering if I’d have to listen to TS again.

Really? Judging by this thread, many of those who already have Tidal will ‘downgrade’ to HiFi, and get the same quality they had before on their Naim streamers, at half the price.

MQA encoded files are either 44.1/24 or 48/24 dependant on the Original Sample Frequency used to create them known as ORFS. So if an original master is 88.2/24 then the MQA is delivered in a 44.1/24 stream with an ORFS of 88.2/24. This is then unfolded to 88.2/24 in the first unfold and then will be rendered either at that or will be further upsampled dependent on the DAC. What you actually get out of the DAC is a black box and is different per device. Some seem to only do 2x on the rendering some just return the same as the ORFS some do 4x or 6x oversampling There is also MQA CD which is mainly used in Japan on physical disks but has been known to crop up as files and adds some more oddities as it unfolds to 24 bit when its wrapped in 16bit.

I could not see Naim compromising SQ aspects to fully support MQA in software unless it was straightforward.

I had wanted to add something about the above: I think they would (if demand justifies it) as long as it doesn’t compromise anything if you don’t use it. They did the same with Chromecast which isn’t ideal regarding SQ either, because the demand/necessity was there and the possibility of using it doesn’t affect those who don’t use it.

They don’t exist. Tidal is MQA encoded only for higher sample rate playback than 44.1/16.

Thanks for the info!

Particularly with Naims recent Tidal Connect integration, I see this as a potential way to:

Regarding point 3 above, am I right in thinking that by using Tidal Connect, we would be able to be logged into our own Tidal accounts within the Tidal app, and each choose music to stream to our Atom without any tedious logging in/out within the Naim app?

Anyone any thoughts on the multi user scenario with Tidal family and Tidal Connect??

The image you show looks like a screen capture of Roon for Taylor’sVersion of Red… but it says right on the format line “MQA”. When I go to that album in Roon and choose “Versions”, it lists 7 versions: 4 are MQA 96 kHz encoded as FLAC 48 kHz 24-bit (evidently Master); 3 are FLAC 44.1 kHz 16 bit (apparently Red Book).

Did you also find a Hi-Res (higher than CD I mean) version that wasn’t also listed as MQA?

Sorry for confusion here… but it doesn’t look like non-MQA Hi-Res to me so far! Maybe I’m reading it wrong or missing something?!?

Edit: should have read the rest of the thread… looks like @Naim.Marketing got there first (as usual!)

Another reason to put MQA out to pasture!

Well, I’m confused, this is what Roon shows for this albumn. So I’m not clear on whether the Tidal versions are hi-res FLAC as MQA or seperate hi-res FLAC and MQA. I usually play the Qobuz version anyway. 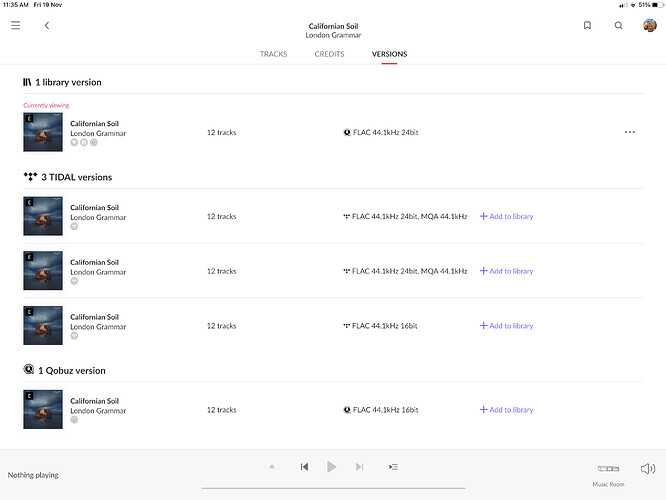 Not sure why there are interests in Tidal (and MQA). Would it be a waste of time?
For me, the choice is crystally clear, Qobuz, and maybe Spotify (if they go lossless).

I use Tidal and Qobuz, as the former has a far more expansive catalogue.