Tidal and Qobuz ‘sound’ the same for same

Simon when I ran a 30 day trial when Qobuz came to the US against TIDAL, I was using the Qobuz Hi-Res files and they sounded much better than the CD quality files available on TIDAL. The reason to moving to Qobuz was the music did sound much better.

Simon when I ran a 30 day trial when Qobuz came to the US against TIDAL which I was using the Hi-Res files sounded much better than the CD quality files available on TIDAL. The reason to moving to Qobuz was the music did sound much better.

I subscribe to Qobuz because of its availability of high definition PCM streams, which sadly Tidal does not provide.

OK, thanks for clearing up the message.

Your right, I interpreted the ‘all things being equal’ as not being possible because of the different pricing and MQA vs HiRes files. If just using CD quality they should be the same. I should not read and respond after midnight.

Having both services gave me the time to think and listen things over. It’s going to be Qobuz only. Often Qobuz has a better catalogue than Tidal. More albums and better resolutions.
When it comes to comparing Tidal standard CD SQ vs Qobuz standard CD SQ there is imho often a difference, I prefer the sound of Qobuz. On Tidal the music is often louder. Perhaps the extra head room gives space to the more pleasant sound? Or is it Hifi placebo again ?

Both services probably have a normalize / replaygain setting, this adjusts the playback volume to a standard level. It’s possible that on one service this setting is enabled but not on the other, this is something you could check to be sure.

Ah. Where can I find this setting ?

It depends on which app/player you use, i don’t use Tidal and Qobuz myself but i found this screenshot as an example from the Tidal app. The setting is called Loudness Normalization there: 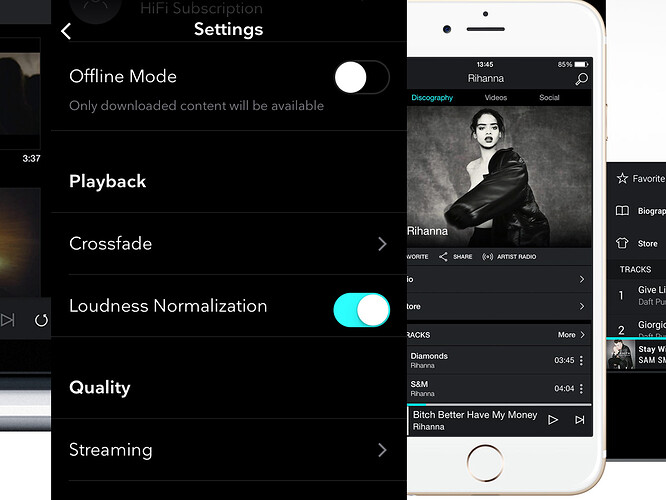 Qobuz isn’t available in many countries (can’t understand why btw).

When Qobuz finally arrive in the US the delay was explained as the the time needed to negotiating the music rights & reimbursement according to the laws of the US.

Found it. In Roon it’s called “volume levelling”. Quite a topic with a lot of settings. Per track / per album / per zone / handled by Roon / handled by the player.

A world to explore

I very much doubt that… to do that would involve creating a new master effectively… and that would run into copyright issues… also gapless replay would jump and interfere with album playback… finally bit wise normalisation can introduce reconstruction errors…
I have no evidence of that, in fact I have clear evidence of the contrary as masters from Tidal and Qobuz have quite difference loudness settings dependent on source master… in fact so much so when I compile playlists I sometimes introduce a degree of level optimisation. (Note not normalisation)

Different distribution masters, especially on older tracks or compilations can have quite different loudness settings.

I think you’ll find that that cloud streamers use CDN providers delivering http media deliveries… these are global cloud media asset service providers like providing images, videos, bit maps etc… I very much doubt that they could get involved with on the fly media asset manipulation…

I am pretty confident the cloud stream providers stream what ever assets the music distributors provide them.

Lossless volume normalization (replaygain) is a standard attribute in FLAC and other formats:

It’s encoded as metadata with the stream, and can be switched on/off during playback. Not all albums/tracks contain it, but most of them do these days.

I use volume levelling on Roon when listening to Qobuz/Tidal provided playlists otherwise you are up and down with the volume control.

Yes, you can provide a degree of loudness optimisation in Roon as an option, when creating playlists etc… it’s not normalisation however… Roon can use the average loudness value of a media asset if provided… or default to a set value. Ron’s loudness optimisation algorithm is based on EBU R128 specification… but is only applied once the media is upsampled to 64 bit floating point to minimise quantisation processing errors.
But I only use occasionally for playlists because bit wise manipulation here (ie changing sample values) can lower the audio quality for critical listening on some media… but for me playlists are not usually for immersive listening.

My understanding is that Tidal is not using replaygain data as such. In any case, Tidal and Roon (don’t know about Qobuz) are doing it right, as far as the realities of bit manipulation allow. https://productionadvice.co.uk/tidal-normalization-upgrade/

In the Roon case, they upsample to 64 bit float before adjusting, to minimize the detrimental effects. @PeterGekko, see here for info about how it works in Roon: https://help.roonlabs.com/portal/en/kb/articles/volume-leveling

Hi, replay gain normalisation (loudness normalisation) is not the same as sample normalisation… they are quite distinct approaches… the former is based on LUFS, the latter on absolutes… and based on sample absolute values.

These algorithms are intended for radio and video programming to provide consistency between programmed material.

Validated my opinion. I bought a year subscription.

Yes it’s a bit of a terminology problem as well i think, with the ambiguity of the term “normalisation”.

From what i gather online, Tidal is more or less using the same technique as replaygain, but their own variation where the loudest song is used as a ceiling:

I don’t believe i suggested them doing any resampling/remastering in my earlier post? Perhaps that is why i didn’t fully understand your follow-up to it…

Well your post prompted me to look into it further… EBU 128 S2 (supplement 2) is specifically targeted at streaming media provides and players, and the recommendation for broadcasters and cloud stream providers following EBU R128 (and Tidal is mentioned as an example) that use their own interfaces is that loudness is applied on their clients either by default or on demand rather than at source and be controlled by using meta data.

So in this example using Roon to optionally apply loudness normalisation if the user requires for content fits this model. This is also the approach used by Tidal’s own player. With Naim natively there is no option to use this normalisation meta data.